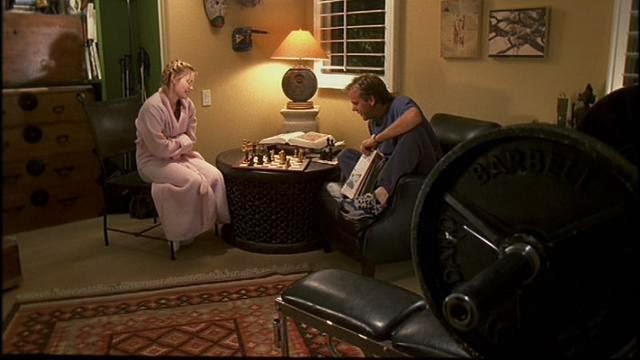 This one doesn’t come from the “24” pilot itself, but from the screenplay, which I read for this week of posts and is easily available online. As I said here, I don’t talk a lot on this blog about screenwriting prose description, but it’s very important, both for making a script compulsively readable and for positioning it in the marketplace.

One thing I mentioned there is the very tricky business of descriptive character introductions. On the one hand, screenwriters are theoretically supposed to avoid “invisibles”, where we describe things that can’t be seen onscreen, but in practice we can get away with these in certain situations, most notably in character introductions, where they’ve actually become fairly mandatory.
Producers, directors, and especially potential actors want to see a little description of each major character as that character is introduced, but these are tricky: Stretch the bounds of what qualities the actor might be able to evince in this introductory shot. The “24” pilot script does a good job with this when introducing Jack’s family in the opening scene.  This is how you do it:
These descriptions also speak to the difference between problems and flaws. You’re describing these people perceptively but not harshly. You’re pointing out their contradictions, but you’re doing so sympathetically. Your empathy for your character needs to begin here.

You have a big job to do.  First, fickle script-readers will ask themselves, “Do I really want to read about this character for the next hour?”  Then a producer will ask, “Do I want to spend the next year of my life begging actors to play this part?”  Then, of course, actors will read it and ask, “Do I really want to be this person for seven years?”  Can your character introductions withstand that scrutiny?
Posted by Matt Bird at 8:00 PM

These are great examples. Since this sort of thing is so incredibly important to get right and and can so quickly signal incompetence to one's readers if you get it wrong, I wouldn't mind seeing a few more positive examples and perhaps even some negative ones (plus, naturally, their Meddler approved fixes).