New Checklist and Rulebook Casefile: Exchange of an Object in The Shining 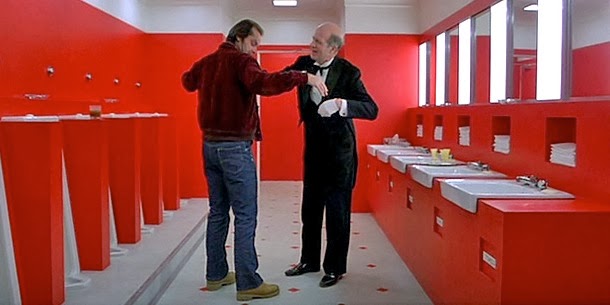 I’ve updated the Checklist road test for The Shining and you can check it out here. Now let’s look at one of the answers in more depth:

Let’s take a closer look at the scene we examined:

At the beginning of this sequence Jack is mildly surprised to find a huge party going on in the ballroom, and orders a drink from the bartender. The bartender serves him and then says that his money is no good there. Jack looks confused, but doesn’t this make sense? Isn’t he the caretaker, and should therefore drink for free? You can see a moment of confusion flit across Jack’s face: he’s not sure what role he’s playing in this little fantasy scenario. At first, Jack says, “I’m the kind of man who wants to know who’s buying his drinks,” The is the first time that he’s shown some interest in probing the ghosts for some time, but he quickly loses interest

This sets up the next beat, when Jack takes his drink and tries to join the party, only to have a waiter accidentally spill an avocado-coctail on him, and insist that they go to the bathroom to take care of it. In the bathroom, Jack realizes that waiter is actually Dexter Grady, the former winter caretaker who chopped up his wife and daughters with an ax. Jack asks Grady about his family, and Grady says yes, his family is there with him. So Jack asks, “Where are they now?” Grady responds, “Oh, they’re somewhere around, I’m not quite sure at this moment,” while dabbing at Jack’s jacket.

This is a classic example of a seemingly-innocuous exchange of an object that actually encapsulates the meaning of the scene. Jack thinks he’ll get a rise out of Grady by grabbing the towel away, but Grady only smiles: the towel has been passed on to his successor, in every sense.
Posted by Matt Bird at 8:00 PM

Hi, nice article, but it's not an "avocado-cocktail." He has Advocaat spilled on him, which is a traditional Dutch alcoholic beverage made of eggs, sugar and brandy. Basically, it's egg nog.