What's the Matter with Hollywood in 2013, Part 3: Filmmakers Despise Their Idealistic Source Material 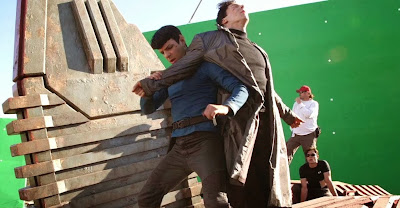 This was the year of movies that were made by people who viscerally despised the source material, most notably Man of Steel, The Hobbit 2 and Star Trek Into Darkness (I haven’t seen The Lone Ranger yet, but I suspect it will fall into the same category)

All of these were based on idealistic source material, and in press interviews each of the filmmakers were quite vocal about their contempt for the tone of the original. Needless to say, that contempt permeated every frame.

One of the screenwriters of Star Trek Into Darkness actually took the time to log onto a fan site after the movie came out just to tell devotees to “FUCK OFF!”, but nobody needed to wait that long to get the message--It was already loud and clear in the theater.

Let’s pick up where we left off on Monday with that movie’s plot: After getting blown up by all those bombs, our villain somehow manages to pull a 9-11 (another thing that has to happen in every recent Hollywood movie) and crash his ship into a civilian-filled city. Our heroes don’t stop him, of course, because that’s not what heroes do. Heroes don’t stop crimes anymore, they merely hunt down the people who blow up our buildings and beat the crap out of them.

And of course, it’s not Kirk that gives the beatdown, it’s Spock. That’s the whole point. The filmmakers are clearly fed up with Spock: “Gee, at what point will Spock realize that thinking is for dopes, and finally use all that alien strength to start running, jumping and punching?? Let’s finally create an atrocity big enough to break down his foolish civility and get him to man up!”

This is really easy to do. Any writer can concoct a situation in which their heroes’ morality looks foolish. But is that our job?

To a certain extent, the decline of American humanism can be dated back to that moment in 1988 when Bernard Shaw asked Michael Dukakis in a presidential debate “Governor, if Kitty Dukakis were raped and murdered, would you favor an irrevocable death penalty for the killer?”

Given how inappropriate the question was (No man wants a national TV audience to suddenly picture his wife getting raped), it’s hard to blame Dukakis for his inarticulate answer (basically, “Um, I’m opposed to the death penalty, so I guess not”), but his failure to offer a rousing denunciation of lynch-law had disastrous consequences. Support for the death penalty soared...and stayed high even after DNA tests proved that a huge number of those awaiting execution were innocent.

The rise of American bloodthirstiness is all-too-evident in modern Hollywood filmmaking, where they’ve developed quite a hero crisis. The idea of creating new heroes is too embarrassing to modern screenwriters, so they feel that they have to keep recycling the old heroes, but those old heroes are even more embarrassing, because they date from a time when most writers were old-school liberals, and thus they seem “hokey” today.

All Hollywood screenwriters have now become Bernard Shaw, saying, “Surely there must be some situation that I can create for these sanctimonious goody-two-shoes saps that will finally force them to man up. Hey, I know, what if Zod was just about to destroy some oddly passive bystanders with his eye-lasers, and Superman had absolutely no other way to stop him? Then will he finally be allowed to kill, puh-leaze??”

The big problem, of course, is Superman actually had a million better options in that situation. He could have flown Zod up, up and away, or he could have said, “Hey, you guys, get out of there while I’m holding this guys head!” (For that matter, the fact that Zod had seen that those people were there, at a time when lasers were shooting out of his eyes, should have meant that they were dead already, right? How can you look at something while firing your eye lasers and not automatically zap that thing?)  The whole situation was inane.

But Man of Steel just blew past that problem because outsmarting your villains is for pansies. Our heroes today have ball sacks, dammit! They live in Bernard-Shaw-ville! The villains can never be thwarted, never be outsmarted, never be sent to prison…they can only be executed or let go, even if the writers have to twist the plot into conniptions in order to place the hero in that position.

The whole plot of these movies has been engineered to pin these heroes down and forcibly strip them of their heroism, leaving them degraded and humiliated. “Those old-school heroes thought they were so proud, so smug, so cool...they thought that they were better than us! Well, we’ll show them!”

Tomorrow we’ll look at the consequences of this worldview in other recent movies, then on Friday we’ll look closer at how this phenomenon plays out in The Hobbit 2...
Posted by Matt Bird at 8:00 PM

You see this happening a bit on TV too with Agents of SHIELD. It's hard to say how much is being "held back" by Marvel on purpose but at times the show is "comics, what comics?". We have been getting the odd begrudging nod to the comics but I think it was fairly crazy to not have a single regular character that wasn't from the marvel universe.

It remains to be seen how much they are going to trash the idea of SHIELD being the good guys.

I would actually disagree in that case--The Hobbit, Superman and Star Trek were all explicitly pacifistic in their original conceptions, at least in a "let's disarm both sides and have them talk it out" kind of way, but the original SHIELD comics by Lee, Kirby and Steranko never showed any such idealism. It's true that the earliest comics didn't explore the possibility that SHIELD might be corrupt, but they were far from idealistic (in fact they were quite jingoistic and militaristic in a rather-harmless way).

In fact, I would say that the show has the opposite problem: for the past 25 years worth of comics, since the late '80s, SHIELD *has* been presented as too-easily-corruptible in the comics, and I think that the show *should* allow for that possibility, but instead they've stuck to a blandly-positive approach. The show features characters (one hero and several villains) who give lip service to the idea of US overreach, but what we see always belies and belittles these concerns.

I suspect that this is because they want "SHIELD isn't trustworthy" to be the big shocking reveal in Captain America 2, but if that's the case, they should have let this show foreshadow that revelation with some disturbing actions, rather than force the show to be blandly-positive until that movie comes out. In this case, I think that more darkness would be *more* faithful to the source material.

I totally agree with you! The way Hollywood is shaping its heroes to become instruments of vengeance, rather than letting them thwart the enemy & save people, is definitely an interesting phenomenon in a post-9/11, post-Bin Laden world.

In Man of Steel, Superman helps cause death & devastation on a scale that dwarfs 9/11, snaps his enemy's neck, then crushes that spy drone (the govt's quite reasonable response to finding a city-levelling alien living in their backyard) & threatens the military to leave him alone. This is the man we're supposed to cheer for? At the end, when he does his traditional 'fly around the world & wink at the camera shot', the 'wink' is so unearned. It would have made more sense if he'd have just stuck his middle finger up at us.

In Man of Steel, if you remember, they also refuse to use the name 'Superman'. That's how utterly repulsed they were by the character.

(By, the way, if you want to see how the traditionally heroic Superman would have saved the day in Man of Steel, have a look for the excellent "How it Should Have Ended" video on the movie.)