So I thought I would be doing a week’s worth of posts split between Oblivion and Pacific Rim, but, as it turns out, I got one post out of the first and, um, many more out of the other, so let’s get Oblivion out of the way first: 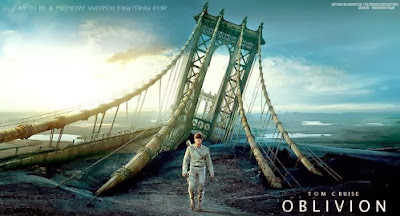 M. Night Shyamalan has a lot to answer for. Bored spec readers became addicted that thrill that went up their spine when they got to an “everything you know is wrong” ending, but pretty much every movie since Sixth Sense, even Shyamalan’s own movies, has gotten it wrong.

Throughout that movie, Bruce Willis’s character is just focused on one problem: what’s wrong with this kid and how can I help him? He’s keeps making progress on that issue, and wraps it up satisfactorily, only to then have the carpet pulled out from underneath him. He’s trying to solve a smaller mystery, and succeeds, only to discover afterwards that he missed the bigger mystery.

What if Willis spent the whole movie trying to figure out why his wife won’t ever look him in the eye? Or why he’s wearing the same two outfits over and over? One of two things would happen: either we would figure it out long before him, or we wouldn’t and we’d have been unpleasantly baffled even after it was revealed.

Shyamalan wasn’t going to let Willis figure out the big mystery until the very end, so he needed a satisfying interim mystery for Willis to satisfactorally solve in the meantime.

In Oblivion, Tom Cruise is also living in an “everything you know is wrong” world (He thinks he’s fighting an alien invasion until he discovers that he is the alien invasion) but he has no smaller mystery to solve, no interim goal. Everything he discovers is another baffling piece of one huge jigsaw puzzle.

As we’ll see later, Pacific Rim presumes its premise, but Oblivion does something even worse: it withholds its premise. If Cruise had figured out by halfway through that he was an alien, then we could have at least had the second half of the movie to see what he did about that, but he doesn’t fully figure it out until the last ten minutes, just in time to nuke the world’s stupidest master villain out of existence, and we’re too busy saying “Huh, What?” to cheer for that.

A big part of the problem is that everybody but Cruise (and his callous partner) already knows the whole truth, and most of them have very good reasons to tell Cruise everything, but they just...don’t. More than once, the movie has to resort to that miserable trope: “Why didn’t you just tell me?” “Because I knew you wouldn’t believe it unless you discovered it for yourself.” Ugh. Don’t do that. (Of course, a better answer would be, “You didn’t ask!” Cruise keeps failing to ask important questions, which makes it impossible to care about him!)

There are two ways this movie could have worked: Either make the reality of the situation clear halfway through, in order to give us time to root for a fight we understand, or give Cruise some other satisfactory goal to accomplish in the meantime, only then to have the carpet yanked out from underneath him at the end.

Instead, we got the third type of ending, and everything about it is wrong.
Posted by Matt Bird at 8:00 PM

I agree with pretty much everything in this post, though I'm sort of surprised you haven't mentioned what I think is the single biggest problem with the film's concept, which is that the villain's plan makes zero sense for the villain.

Assuming that what the evil alien triangle mothership thingie Tet or whatever wants from Cruise et al. is drone techs with opposable thumbs, why go to all that trouble of cloning and housing humans, keeping both the truth of their daily existence and the memories of their previous incarnation suppressed? Why not just make a full on robotic T-1000 cyborg? There's literally no reason why these positions are only or best able to be filled with mind-wiped human clones. None. But the only reason we're given to like the protagonist -- too little and too late -- is because he recovers some of his vestigal humanity like ROBOCOP and begins to act on it. While the fact that he was ever human to begin with -- or that his alien overlords would ever have employed a human thusly is absolute and utter b.s.

The whole time I was watching this movie I kept turning to my husband and saying, "I still don't know what this movie is about."

You're right about Sixth Sense: we feel like we know just what it's about--helping the kid solve his ghost problem. So you feel like you're going somewhere, making progress in the story.

With Oblivion, it was like I'd gotten on a train heading to nowhere. Then I reached my destination, which was a place I didn't want to go at all.

It's always nice to feel like you chose your destination and you are heading there, at least for most of the movie.