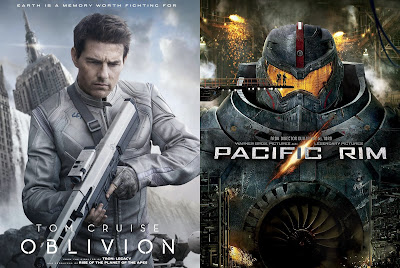 This was supposed to finally be the “Summer of New Ideas”: Instead of endless sequels and reboots, Hollywood actually bought some original spec scripts and poured a lot of money into them, hoping to create brand new franchises from scratch. Unfortunately, each one was greeted with tepid reviews and lackluster box office, so the whole thing seemed to come to nothing, possibly souring Hollywood on original scripts once and for all.

Of course, being a family man, I didn’t get to actually see any of them in the theater, so I had to wait for the fall to get caught up. I’ve now seen Oblivion and Pacific Rim (Elysium is on the way), hoping that the reviews and the viewing public were wrong, and these might eventually turn into home-video-sleeper-hits.

Well, folks, the news is grim. Not so much because the movies were terrible, but because they were just weren’t good enough. A while ago, after catching up with John Carter and Green Lantern, I did “Truly Terrible Movies” week. These examples aren’t so drastic, but it’s actually more disappointing, so we’ll do “Mediocre Modern Movies Week(s)”.

I hope this provides a good opportunity: It’s so hard to reach “good enough” that it’s tempting just lay down there and go to sleep, but how do you make it to the next level where your work is actually meaningful? That’s been a focus of this blog since the beginning, and these movies exemplify a lot of rules we’ve already codified, as well as suggesting new ones.

But before we begin, we should clarify that both of these movies did certain things very right. Let’s start with just two:
Nevertheless...both movies fail on many levels. So let’s find out why!
Posted by Matt Bird at 12:00 PM

Though I'll probably agree with most if not all of what you have to say about Oblivion, I really love that movie, in large part because the production design, cinematography, and soundtrack are so breathtaking. Storywise I though it succeeded by not trying to do too much, thus for me it was the movie that, a year later, finally washed away the horrible aftertaste left by Prometheus.

Oooh, I'm looking forward to this. Seeing where mediocre movies work and where they don't could be very illuminating. Do most fail in the same way? Are there "types of mediocrity," where semi-successful movies could be categorized into groups? Or will it just provide Big Red Flags for us to watch for?

There's so much to be gained from object lessons.

Hans, I totally agree that the production design, cinematography, and especially the haunting score for Oblivion are all absolutely brilliant. It was very pleasant and hypnotic to watch, and I kept rooting for the story to start making sense, if only to validate by enthusiasm for the movie's aesthetics... but in the end the story soured my appreciation for the movie's other pleasures, for reasons I'll get into tomorrow.

Excited to read and discuss Pacific Rim. I love that movie, but it took a lot of expectation adjustment after the first viewing to come around to it.

It has been a few years since I've encountered a movie that I really loved. I saw both of these that you reviewed, as well as Elysium and the new Hunger Games movie, and all of them were just decent without actually being really good. Where oh where is the next Blade Runner?!

If Ted Cross wants some serious sci-fi, he should try Shane Carruth's films, like PRIMER and UPSTREAM COLOR.

I'll certainly be interested in hearing how PACIFIC RIM could be a better movie, considering that almost everything inherent in its premise is blatantly cartoonish if not ridiculous. The entire necessity of fighting inter-galatic/dimensional monsters with giant battle bots (but not nukes or missles, etc.) never made any sense in any of those prior films or TV shows. I don't see how subtler character work could push this movie out of the range of gonzo mediocrity it seems so steadily determined to achieve. The most potentially interesting aspect of the sci-fi concepts has to do with the robot pilots mind-melding, but that's hardly touched on at all. And if you wanted to treat that topic more seriously -- as say, Joe Haldeman does in FOREVER PEACE -- you'd almost assuredly have to ditch most of the battle bot baggage that made the studio want to make it and the audience pay to see it.

OBLIVION appears to be what happens when you trust your star rather than William Monahan. The film is good for about 45 minutes. Until you start learning all the reasons why things are happening. And they make zero sense. And turn out to be a hodge-podge of cliches. On top of which, there are way too many of them! When will writers learn to distinguish between twists and motivations?

So here's hoping both titles get a full service Meddler treatment.