The central conceit of Pacific Rim is that one pilot can’t control a giant robot without getting a nosebleed (heaven forbid!) so they have to have two pilots do a mind-meld in order to share the load. Okay, that’s somewhat interesting, but what’s the metaphor here? I guess you could say that that’s a metaphor for how real world co-pilots learn to work together…but that has nothing to do with the core concept of Monsters vs. Robots. The metaphor, to the extent that it exists, is muddled, inert, and extraneous. 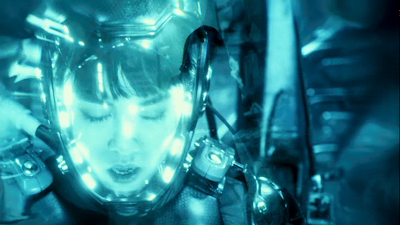 Besides, the filmmakers don’t really care about this plotline: the whole first half is about how hard it is to mind-meld, and sure enough, the first time our heroes try it, they fail catastrophically, almost blowing up the base in the process. Naturally, they get fired...but then in the next big attack all of the other pilots fail and the boss has no choice but to call on our infamously-bad-at-mind-melding heroes. What will our troubled heroes see in each other’s memories this time, and will they be able to deal with it??

Sorry, we never find out, because once the movie finally gets to indulge in robot vs. monster mayhem, mind-melding is never shown or mentioned again! Who cares? We’ve got monsters to punch! We just have to assume the whole problem was dealt with offscreen, I guess.

This exemplifies so many problems we’ve talked about before. Mind-melding is hard to do but it isn’t hard to want to do. (It might have been if each pilot was trying to hide memories from the other, but neither one is.) The whole concept is an abstraction or an abstraction. Worst of all, this premise is neither how life is nor how life feels. You know how, in real life, if you want to defeat monstrous people, you have to reach into the memories of the person next to you? No? You’ve never felt that way? Of course not.

So what should they have done? Just look at the poster. I do freelance copywriting work for a book publisher, and one shocking thing they’ve taught me is that, if the premise for the book you’re selling is confusing or too dumb, you just lie about what it is in order to sell it, creating a tagline for what the book should have been. The buyers will be disappointed, of course, but hey, at least they bought it. 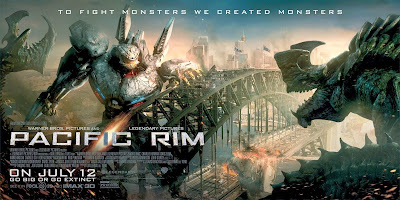 Sure enough, if you look at the poster for Pacific Rim, you’ll see that the tagline promises a much better concept: “To fight monsters, we created monsters.” That’s a movie I’d like to see! Some smart copywriter realized that the movie didn’t work because it wasn’t ironic, so he or she created a premise for the poster that was ironic, that did relate the basic concept. Monsters vs. Robots...what could go wrong with that? Well, what’s the most ironic answer? The robots turn out to be worse than the monsters! Then we’d have a movie!

We’ll explore that possibility more next time…
Posted by Matt Bird at 8:00 PM

Great point. This, IMO, is the biggest issue with Pacific Rim. Oddly enough, Travis Beacham's script is quite different from the actual movie - the story focuses much more intensely on the relationship between the two pilots and the drift (ex: at first they can't understand each other because they speak different languages, but through drifting they learn to understand and work together). I think the metaphor and the story worked much better with that script, and I'm not quite sure why Del Toro decided to cleave it up for the one he put onscreen...

It's not just the clumsy metaphor of mind-melding in this film but also the ill-defined and poorly imagined rules of how it's supposed to work. And the additional info Jay reports in the script doesn't seem to help. Who thinks in words, especially when they're in a fight-or-flight moment of visceral combat? If mind-melding doesn't bypass language, even when you'd naturally be doing that anyway, then what's the point of it?

That said, I'm not sure turning the Jaegers rogue would work for the sort of movie this wants to be. So we'll have to see exactly what you mean to extrapolate from that Nietzschean tagline. I'm certainly curious to find out what you've got up your sleeve.

How about this: to an unknown degree, two linked minds in a mecha are not like two individual humans making joint decisions. They become something else. The story could be the fear the pilots have of utterly losing themselves in the mind-meld. (Let's say that a lot of pilots go insane or die when de-linked from their flyin' buddy, for reasons unknown. Keeping them linked outside of mechas is not a great solution either, because REASONS.)

Then you could have the theme of "fear of loss of self when coming together." The monsters function as the threat that forces people to subsume their individuality. The pilots really, really don't want to.

And then you could throw in weird twists, like certain kinds of people create different kinds of dual-mind configurations, and maybe pilots switch partners to devastating and important effect, and the dual-mind effect makes them less human or concerned with civilians, or maybe the reverse, or...well, just screw with it and see what happens.

And of course everyone else is terrified of what kind of psycho hose beasts are piloting the massive murder machines that are their only hope against alien monsters, because them pilots, them pilots ain't normal no more.

Spitballin' is fun, yo.

@Harvey, I'd watch the hell out of that movie.