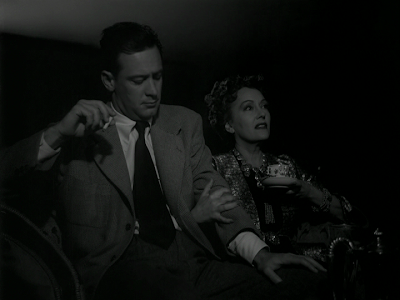 Deviation: The narration is wall-to-wall, describing too much of what we can already see, and talking too much about what it all means.

The Potential Problem: This is a visual medium. You should show and not tell. And telling us what it means denies us the chance to figure that out for ourselves, which is far more meaningful.

Does the Movie Get Away With It? Yes and no. It’s so well written and well-delivered that it’s hard to mind too much, but it becomes exhausting at time, such as when they’re watching a movie and Joe tells us:
There are a few things here we wouldn’t know without narration: the smell, how often this would happen, etc, but there are so many things that we can see just fine for ourselves: that they would watch movies in her living room, that Max would run the projector, that Norma would grab his arm, that it was her on the screen (he says he doesn’t have to tell us, but then he tells us anyway!)

Wilder is failing moviemaking 101, but, undeniably, this movie is a beloved classic. Everybody loves it, including myself, so the hard-and-fast rules of screenwriting seem to fail here. Why?
Joe thinks he can interpret it all for us, but he misses a lot of the symbolism. He never says that he’s her new monkey, or that she’s Salome and he’s John the Baptist. He never speculates on the extent of Norma’s true madness, like we do. Because the voiceover, too, has a limited perspective, it leaves the audience some breathing room.
Posted by Matt Bird at 8:00 PM

This movie always stuck in my head when reading a common bit of writing advice. "Avoid narration? But...but...Sunset Boulevard! It's so awesome!" SB proves that it can work, but man, it's not easy.

Another one that made it work was Out of the Past. Hm. Are noirs are the only genre where narration kinda-sorta works? SB is very much a noir -- Joe is the homme fatal, the usual noir themes are there, the underlying dread is unmistakable. Painful, obnoxious narration is a common element in bad noirs.

Any thoughts on what would make it the right tool for a job? What job does first-person narration serve well?

I would say that there are examples of great movies with voiceover in almost every genre, even some of those with wall-to-wall voiceover. I think that the key to a great voiceover is that it has to be a counterpoint to what we're seeing: demonstrating the hero's vaingloriousness (as I mentioned in my post on "Barcelona"), or immaturity ("Badlands", "Days of Heaven"), or naivete ("The Apartment", "Raising Arizona") or later bitterness ("Double Indemnity", "True Grit"), or derangement ("Taxi Driver", "Fight Club"). Very rarely, it can even work as stream-of-consciousness ("Adaptation", "The Thin Red Line")

The worst voicovers are ones that narrate what we're seeing onscreen and/or simply explain everything that happens in between scenes from the character's current point of view. I was horrified that Woody Allen won screenwriting awards for "Vicky Christina Barcelona", which had one of the laziest and most redundant voiceovers I've ever seen (though it deserved the awards it got for its performances).