Rulebook Casefile: The Demands of Genre on "Breaking Bad"

Well, guys, I said I was ready to move on, but everything else is taking too long, so let’s derive one more rule from that “Breaking Bad” finale, shall we? 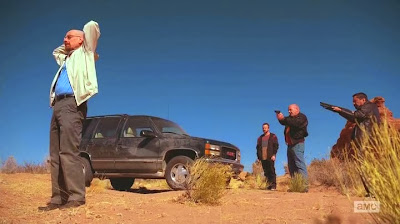 Why was the final season so much more satisfying than other acclaimed shows? The most obvious answer is that it wanted to be satisfying. That may not seem exceptional, but there’s actually a lot of pressure on these shows not to satisfy.  In fact, my main fear going into the final seasons was that all those Emmys would finally go to creator Vince Gilligan’s head and the show would catch “prestige drama disease”. *

In later seasons of “The Sopranos”, for instance, you could practically hear David Chase saying to his audience, “I’m not going to wrap things up all neat and tidy for you— what do you think this is, ‘Diff’rent Strokes’?” He let all those awards convince him that he was making “Scenes from a Marriage”, not “The Godfather”.

The gangster genre is synonymous with “rise and fall”, but Chase refused to satisfy those genre cravings because he decided that, no, it was a show about the mobster in all of us, and once he switched to the retribution phase of the story, then the audience would get to divorce themselves from identifying with Tony and suddenly adopt a smug condemnation of him, as if they weren’t enjoying his actions all along.

I sympathize with this concern. It is annoying that audiences get to have it both ways: first getting joy from living vicariously through an antihero’s transgressions, then getting just as much enjoyment from watching those transgression be harshly punished. Chase must have known that Tony’s arrest and trial would make for a great story, but he was unwilling to flip that switch.

But “Breaking Bad” never found itself caught up in that kind of antagonistic relationship with its audience, perhaps because it always put genre first, and drama second. Gilligan knew that Bryan Cranston count inject powerfully-real human emotion into even the most over-the-top situations, so they could continue having fun without losing the gravity.

Even more impressively, Gilligan managed to straddle two genres and totally satisfy both: the Crime Saga and the Western. It’s amazing that the most heartbreaking episode of this critically beloved show still managed to include an old-fashioned desert shoot-out. In fact, Gilligan has made it clear in interviews that the finale was heavily influenced by The Searchers, and it shows.

Rather than chafing under the strain of his genre obligations, as Chase did, Gilligan decided to dance with who brung him and deliver a delightfully pulpy final season, even going so far as to include a great train robbery!

Gilligan cut his audience some slack: we had come with him this far, stuck with his hero though some very alienating periods, and let him put us though a lot of twist-the-knife moral queasiness, and now we had earned a cathartic blaze-of-glory finale. He trusted the earlier darkness to stay with us, long after the catharsis had faded.

In the finale, as in the whole series, he was more than willing to offer a heaping spoonful of genre delights to help the audience swallow a very bitter pill: the show’s bleak diagnosis of America’s sick soul.

* I would say that the only overly-arty episode was “Fly”, about Walt’s allegorical hunt for a fly in his lab, though I know it has big fans.
Posted by Matt Bird at 7:59 PM

First of all, I have to agree about "The Fly." It was my least favorite episode of the series, and the only one that seemed completely out of the stream of the show in terms of both structure and tone. Like the bad old days of the filler episode that doesn't actually move the story forward. I hated it, and was surprised that the same director nailed the best episode of the last season so perfectly. Actually not that surprising, I suppose. The problem with "The Fly" was the script, not the direction.

I personally loved the final episode of THE SOPRANOS, although the lead up to it was a little off. I would say it is a rise and fall: Tony's empire crumbles, almost stabilizes, then circumstances play out in a way that force his death. But that final moment worked for me, taking Tony right up to the second that it all comes back to him, then turning out the lights. A little artier than some of the rest of the series, but the nod to the restaurant scene in THE GODFATHER brought it back to it's genre roots for me.

My problem with the finale of BREAKING BAD was that, per your earlier posts, it "rolled down hill." The basic dilemma and Walt's balancing act had ended two episodes ago, but some of the conflict was unresolved. So there wasn't as much at stake in the confrontation with the Aryans, except saving Pinkman, which wasn't really in Walt's main plan, and was presented as secondary. It seems to me that passing the money on, especially by the end of the last season, was pretty secondary as well.

I did like the episode. It was maybe too bombastic for my taste, and I would have liked to see Walt wrap things up with a little more finesse, but it satisfied all the expectations you're talking about. And I don't think ending the series right at the climax a few episodes back would have worked either. But as it is, it felt like a lot of "tying up loose ends."

Contrast "The Fly" with "4 Days Out," one of the better bottle shows I've ever seen, and a quintessential early episode of BREAKING BAD.

I don't disagree with this post, but I think the emphasis is misplaced. I think what really separates the ending of BREAKING BAD from THE SOPRANOS and other shows worthy of its company is the way the writers never lost a grip on the essential truths of the story they were telling.

THE SOPRANOS clearly went on for at least a season or two too long. By your own reporting on this blog, it also changed showrunners late in the game from creator David Chase to Matthew Weiner, and never was really sure what it wanted to do with Tony over the long haul. Vince Gilligan always knew. His concept for Walt's arc was brilliant and he played it out brilliantly.

The genre elements of "Dead Freight" are thrilling and satisfying, but they're all a prelude to the horrible truth Walt starts learning at the end of the episode: how all of his masterfully controlled plans can so easily crumble. Same with the shootout in "Ozymandias." What's satisfying is finally seeing the characters get what's been a long time coming.

One thing Gilligan and his writers are especially great at doing is dreaming up ways to have their dramatic cake and eat it too. Case in point is Hank. Lesser writers would be stuck on the seeming conundrum that if Hank wins, if he arrests Walt fair and square, then Walt loses and his story is over. Likewise, if Walt wins, then Hank loses utterly -- he's dead and he's failed in his arc as a cop. What the writers did -- and I'd argue, the reason they split that shootout in two -- was find a way for Hank to collar Walt and for Walt to still get away. It's even more brilliant because it reinforces the lesson Walt has to spend this whole final season learning -- that just because he killed Gus Fring doesn't mean he is Gus Fring. That there are limits to his power and influence, that he can't control everyone, least of all the cold blooded neo-Nazi killers who he imagined he could turn on and off with money.

About J.A.'s point: Those big thick Dickens and Tolstoy novels don't climax in their final chapter and we shouldn't expect 50-hour serialized TV narratives to do that either.

I'd also say that the SCENES FROM A MARRIAGE reference is an unfair dig. The thing that makes that film -- and all of Bergman's work -- so amazing would have been good for Chase and Weiner to remember in THE SOPRANOS final seasons. Bergman's always so true to his characters. And his films satisfy because they tell us the deepest most painful truths about ourselves. There's no better film about a long term relationship than SCENES FROM A MARRIAGE. No more honest fight scenes between couples. If THE SOPRANOS had showed us the mafia equivalent of that, we'd have nothing to complain about. There's a reason why William Goldman called Bergman the greatest screenwriter he knew. And it has to do precisely with Bergman's unmatched ability to cut out the bullshit and get to what he called "the wound of the story."

Just to be clear: David Chase was always the official showrunner of "The Sopranos", but there were rumors that he had let Matthew Weiner sort-of take over the writing room, and I suspected that was true.

Also let me clarify that I love love love Scenes from a Marriage. I was just referring to that as a different sort of story that comes with different genre expectations: ie, the couple seems stuck in an endless loop, as Tony did for the final few seasons, but that's acceptable for straight drama and not for the gangster story.

And I agree that it was brilliant to break the shootout over two episodes, giving us a week to savor Hank's "triumph", even though we could tell that it would be very short-lived.

I agree with JA that the final two episodes "rolled downhill", and it was really just a two-episode epilogue to the real finale, which was Ozymandias, but, like js., I would argue that Gilligan was just taking advantage of the long form format to do what a movie couldn't do and use that extra time to let the long-term consequences of that climax play out.

It also allowed us to spend a week seething at Walt's evil in the climax, and then a week pitying his pathetic exile, and then left us somewhat-cheering his slight final redemption. As I say in the post, Gilligan trusted the audience to continue to hold on to all of those emotions, without worrying that the final psuedo-redemptive acts were letting the character or the audience off the hook.