Storyteller's Rulebook #189: The Audience Will Vet Your Hero Thoroughly (And Most Heroes Fail the Test)

So I’ve been revising an old screenplay and also puttering around with a novel for kids, and in both cases, I see that I’m making the same mistake. I’m introducing the main character when he’s alone at home, and in both cases, I’m letting him talk about himself… but in both cases I hold off way too long before I get to an actual dialogue scene with another person. The problem is, no matter how compelling I try to make him, the audience isn’t going to engage with this character until they see him interacting with someone else.

We’re all awesome in our own heads. We’re all cool. We’re all righteous and justified. But the audience knows to be dubious. The thoughts in our heads and even our actions when we’re alone don’t show who we really are, only interactions can do that.

The audience is waiting for a chance to evaluate whether or not they want your main character to be their hero. They can’t make that choice until they’ve heard this character have a conversation with someone else. Only dialogue tests a character. Will your hero pass that test?

This is one of the big problems with movies where the “good guy” is suddenly revealed to be the bad guy more than halfway through, such as The Perfect Getaway and All the Boys Love Mandy Lane. 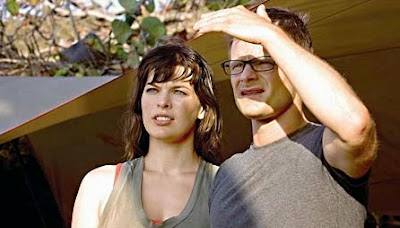 The writers of these types of scripts labor under a fundamental misconception. They think that the audience assumes that the main character is the good guy until being told otherwise. But the opposite is actually true: the audience will automatically distrust your main characters, and will only invest in them if they prove themselves to be sufficiently heroic early on in your story. Your audience will be watching your heroes like a hawk, and they’ll know your heroes aren’t really heroic enough long before the storyteller reveals this “shocking secret”.

Both of the above examples were very popular among industry folk, but then they unexpectedly did terribly with test audiences, and so they were barely released. (Mandy Lane just got dumped in a few theaters, seven years after its festival debut) Film people have to watch too many movies (sometimes 3 or 4 terrible new movies a day), and they’re totally jaded. They crave shocking twists that will wake them up from the their boredom.

But general audiences don’t get to watch hundreds of bad new movies for free. We have to pay for each one, and so we have high standards. We still demand characters we can really care about. And, in order to spare ourselves from being hurt, we’re going to decide early on in the story whether of nor we want to like your main character, based on what we think of their interactions with others.

Audiences didn’t really care when Mandy Lane turned out to be the villain, because, before that, she had been nobody’s idea of a compelling hero.
Posted by Matt Bird at 9:52 PM

I agree with your point, but not necessarily in the way you've made it in this post.

Haven't seen MANDY LANE yet, but I do like A PERFECT GETAWAY. And I was surprised by the twist. And I don't think this kind of structural dynamic is necessarily or inherently a cheap dramatic cheat that real paying thriller audiences are too unjaded to crave. (Isn't it exactly the kind of guess-the-killer gamesmanship that stalwarts of the genre like Agatha Christie have conditioned audiences to want to play for decades now?) Or that there aren't even higher order examples of it -- in Hitchcock films like PSYCHO, in your analysis of the tag-team progatonists/antagonists of THE SHINING or in the extremities of New Korean cinema like SYMPATHY FOR MR. VENGEANCE or even a first-rate American thriller under that influence like the riveting PRISONERS.

It's more dramatically and thematically interesting, of course, if the genuinely good guy is eventually revealed to be a genuinely bad guy while perhaps still holding down the position of protagonist (see most of the films I just mentioned above or BREAKING BAD). But I don't think there's anything wrong with playing games with an audience's identification or with the hidden nature of a protagonist. It's obviously one of the most cinematic things you can do with a screen story, which is why a master like Hitchcock was so taken with it.

This is a great point in general, but like j.s., I have a quibble: we're not "all awesome in our own heads." Since you brought up the topic of kids' books, look at the first chapter of A Wrinkle in Time. Meg is convinced she's a loser. Tough trick for a writer to pull this off without making the hero seem like a self-pitying mope, but L'Engle succeeds by making Meg reproach herself for doing things that are, in fact, relatable (not doing well in school, being afraid of a thunderstorm) or active and admirable (beating up a boy bigger than her for making fun of her little brother).

In writing, I suppose one way you can make a character "prove themselves" even if it's not through dialogue with another is through the convolutions of their own internal monologue -- the way they respond to themselves as they think, revising, contradicting, and elaborating their own thoughts on the fly. But again, something like that probably only works best in writing.

Another way to test character without dialogue is through pure action. "A Day No Pigs Would Die" by Robert Peck starts with the farmboy hero in a field, having just run away from school, when he happens upon a neighbor's cow which is giving birth, and he has to deliver the calf on his own. No dialogue, but we learn plenty about the kid. And doesn't "There Will Be Blood" open with a 20-minute sequence without dialogue in which Daniel Plainview is doing gritty wildcatting labor?

On the one hand, I would argue that "There Will Be Blood" is a point in my favor, because he seems admirable when he's just laboring on his own, but only when he interacts with others do we realize that he's actually a psychopath. And the Peck example still seems like an interaction to me, albeit an interaction with an animal...

But "Wrinkle in Time" is a pretty good example of the narrator just telling us all about the heroine, and we do really like her before she interacts with anyone.

This is slightly different situation because it's third person narration which always seems more reliable, but it's very limited third person, so it's almost like first person. (Also, it's worth noting that she is having a conversation by page 5.)

But I think another reason it works is that the narration's not telling us about how cool she is, but rather is giving us her charming-but-very-self-deprecating view of herself. We're always more likely to accept a self-deprecating story without verification.