How to Create a TV Show, Addendum: Create an Unsafe Space 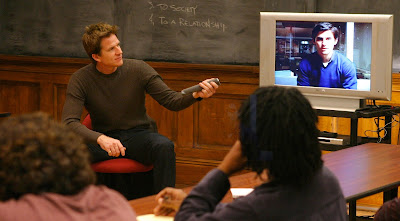 The good news was that I was getting to take a class with one of my idols, the great Tom Fontana, creator of “Homicide” and longtime showrunner of a show I love even more: “St. Elsewhere”* The bad news was that he was coming to discuss his recent show “The Bedford Diaries”, which I hadn’t liked. I had a dilemma: should I pretend to love it, so that I could get in good with him, or should I tell him what I really thought?

There was never really any question, given my congenital case of logorrhea. I wound up bringing up quite a few of my frustrations with the series, first gingerly, then not so much.

“The Bedford Diaries”, which ran for half a season on the CW, was about a small group of students at a Columbia-like school who attended a popular but controversial sexuality seminar, taught by a sensitive professor played by Matthew Modine. They were each expected to make video diaries about their love life, and then share them in intimate class discussions.

On the surface, this doesn’t sound like a very promising premise, but I still think there might have been a version of this series that could have worked…with one big change.

I’ll certainly admit that, if I had been a university administrator, I would only agree to host such a class on one condition: it would have to be a “safe space”. I would want a sensitive, caring, non-judgmental professor who made sure nothing too upsetting ever happened. And that’s exactly what the show had in Modine, with his soft eyes, soft smile and warm voice.

From very early on in the pilot, it was obvious that these kids could lie to Modine, about experiences or feelings, and he would never call them out on it, which turned the class into nothing more than a bragging session, with almost no stakes or emotional jeopardy.

I was turning a little red as I found myself spouting all of this off to Tom and his class, but I blundered on: I suggested that the show could have worked if, instead of Modine, he’d cast the always-underutilized Michele Forbes, who had been so good on Tom’s own “Homicide”. Forbes has perfected that take-no-shit attitude and penetrating stare that makes bullshitters automatically wilt, and yet she does it in a way that maintains  her vulnerability. Forbes was one of the most appealing characters on “Homicide”, but there was never any doubt that the detectives who entered her autopsy room were entering a very unsafe space. 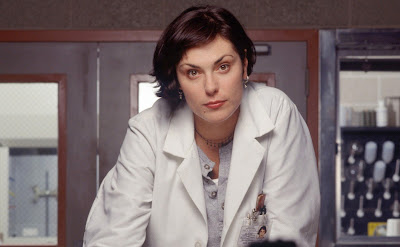 What if those students had walked into that class and met those judgmental eyes (not to mention Forbes’s intimidating sexuality)?  They would have said, “Oh hell, I signed up for the wrong class if I just wanted to brag about getting laid..this lady’s going to tear me open.” I think that maybe the show could have come alive.

So there it was, I was now flat-out giving Tom showrunner lessons in front of his class. I was shrinking down into my chair after I finished, but Tom just chuckled, nodded and said, “I sure wish that you’d told me that before we started!” I breathed a sigh of relief.. he’s a true class act. (…and I did get to work for him later, but, alas, not yet as a writer, though the possibility has been floated a few times. Here’s hoping.)

* Looking back, it’s weird how little I’ve talked about “St. Elsewhere” on this site. Maybe it’s because, like “Slings and Arrows”, the show was so brilliantly original that it’s hard to draw general examples from it. And before anybody asks, I don’t mean to slight Tom’s other big success, “Oz”. I was too delicate for that show, but I respected it.
Posted by Matt Bird at 8:00 AM

The take-home point for me here is how, when you're dreaming up the story world of your film/TV show, the conception/casting of your characters can go a long way toward generating more opportunities for conflict and toward defining the places where it all happens.

Imagine a version of HOUSE with a Matthew Modine type sensitive guy as the lead. It would never work. The force of Gregory House's personality is what almost single handedly makes his well-funded lifesaving university hospital an unsafe space for his colleagues (and, often, his patients!). So sometimes it's more about the people than the place. And sometimes the outsize impact of the people is the place. OZ, after all, doesn't happen in a minimum security way station for white collar criminals.

Hmm... but "Orange is the Black" *does* happen in a minimum security way station for white collar criminals, and it also works. The key moment in the pilot is when the warden specifically explains that this isn't Oz, and there's unlikely to be any real violence, but that women tear each other apart in different ways. That establishes the tone and the jeopardy.

Even so, the jail in that show might as well be Oz as far as the sheltered rich girl protagonist is concerned. It's certainly the unsafest space she's ever been. Though I doubt the show would work the same way if it were about men and/or more of a straight drama and less of a dramady/character study.

Modine works just fine as a leavening force of compassion and humor in a world that's already gone mad with ultra-violence, which is exactly how Kubrick used him in FULL METAL JACKET.

I'd forgotten about "Full Metal Jacket". Yeah, he was good in that.