How to Create a TV Show, Addendum: Build Up Potential Energy 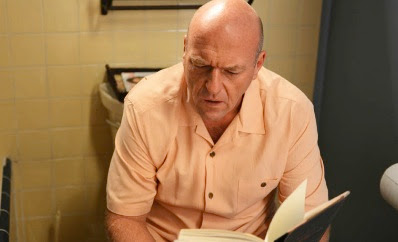 We’re currently barreling towards the end of “Breaking Bad”, and I’m happy to say that, unlike just about every other show from this recent flowering of great TV, they seem to be sticking the landing. It helps that the show can now take advantage of the planned end to deliver a series of pay-offs that have been looming ever since the pilot.

It does drive me a little bit crazy that everybody on TV keeps their cancer a secret. Trust me, folks, this makes no sense, because telling people you have cancer is awesome. You get showered with love every time you drop the C card. All sins are forgiven, and you instantly become a great and noble hero in everybody’s eyes. But TV writers know the value of a great secret, so everybody on TV has to keep mum as long as they can.

In stand-alone stories, every secret that you set up is something that you’ll have to pay off before the end, so you’re just creating lots of extra work for yourself, but when you’re writing a pilot, secrets are free energy. They create subtext for the dialogue, conflict for the scenework, and motivation for the plot. And best of all, you don’t need to have to have any idea how they’re going to pay off.

Once again, you’re rolling rocks uphill, creating potential energy. That built-up energy will vibrate through everything until you finally let it go. It keeps your audience asking, “How long until…?”

Of course, the ultimate form of potential energy is “I want to see those two kiss!” This can take two forms: Protest-too-much conflict (Sam and Diane) or unrequited pining (Jim and Pam). The first gives you more conflict, the second gives you more intense audience identification. 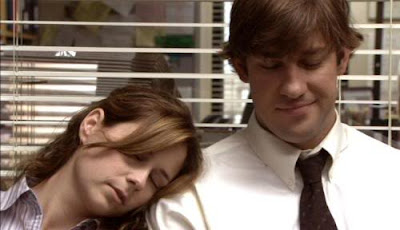 On most shows, this will happen whether you want it to or not. You may want your TV show to be a sensitive, hard-hitting expose of socio-economic conditions in a particular sub-stratum of society, and you may succeed spectacularly, but rest assured, even if you’re not trying to create any romantic tension, the message boards for fans of your show will quickly be filled by “shippers” who have paired up your character against your will.

So don’t fight it. Romantic tension is the lifeblood of TV, both drama and comedy, for a good reason. More than any other medium, you’re asking your audience to commit. You’re asking your audience to spend one night a week with you for five years, but you know that they will mysteriously disappear the moment their passion goes away. Guess what the best way to stoke that passion is?

When the TV turns off, it’s totally up to your viewers whether or not they want to come back next week*. The best way to do that is to include something specific that they hope to see happen.  So start kindling those hopes in your pilot.

* Unless they’re binging on Netflix, of course, where they now have that nerve-wracking countdown clock that gives you fifteen second to decide if you want to abort the marathon. I can’t take that kind of pressure, you bastards!
Posted by Matt Bird at 8:00 PM