How To Structure a Story Around a Large Problem, Step 1: The Longstanding Personal Problem 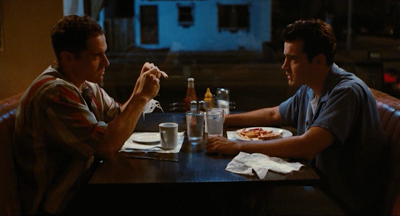 The Conventional Wisdom:
What Human Nature Dictates:
What Writers Should Keep in Mind:
Examples of Personal Problems
Notable Exceptions (But Don’t Try This At Home):
Tomorrow: The Public Humiliation...

I believe I've recommended this once before but this post again reminds me of a great book everyone who reads this site would like: "The Storytelling Animal" by Jonathan Gottschall.

Matt, you are a genius. Truly and seriously. Thank you so much for all your work!

Perhaps it's a reflection of my beliefs, but it also seems that personal problems are not solvable, that is, prevented from reappearing, but managed. A person with little empathy for others is not necessarily going to turn into Mr. Rogers by the end of the movie.

Many people believe that, however, and writers who buy into that (at least long enough to tell their stories) will succeed in writing for them. But if a writer hesitates while creating scenarios like this, it may be that you're not buying into the solution you're proposing.

I thought that was the one weakness with "Baby Boom," the Diane Keaton film from the '70s about a high-powered corporate exec who learns motherhood after she's fired. At the end, she returns to the company and delivers this long, heartfelt speech about what she's learned. Wonderful, but she could have showed that she was still the brilliant exec, arrange a company takeover, fire all the execs who screwed her over, then deliver the heartfelt speech. After all, even sharks have mothers.

Again, I think that that's the difference between flaw and problem. The problem (disrespect, loneliness, misunderstood, etc.) usually *is* solvable, but the flaw (lack of empathy, loner, arrogant) is only manageable.

Matt, that makes me think of the difference between film & TV character arcs. The conventional wisdom is that films need heroes who change, whereas TV heroes don't.

But, if, in your formulation, a feature film is about the protagonist successfully managing a flaw to overcome a problem, then a serious TV drama is instead more about managing/accepting/succumbing to the protagonist's flaw, regardless of how various problems (episode or season arcs) are handled in between.

Could it be that the phoney arcs Bill is having troubled with aren't just about the work of less skilled writers but ones who are misunderstanding the difference between a protagonist's problem and his/her flaw?

I saw another formulation of character that seemed very contained and elegant, and that might fit in well here. The elements are:

1. The Wound, a trauma the character experienced in the past that has left a psychological mark

2. Fear, what I think you'd call a Private Fear, Matt, which is the terror of experiencing that same wound again (the stakes!).

3. The Belief, which is your false statement of philosophy.

3. The Identity, which is the false self the character shows the world. This is the emotional armour that protects from the Fear, created by the Belief that comes from the Wound.

4. The Essential Self, which lies under all the armour, and is the end of the character's arc in the story.

What I love about this formulation is that it makes explicit the relations between the different elements that drive a character. It allows you to design the story world around the protagonist's problem, and ensure they must face their fear in the most appropriate way, creating a much more coherent drama.

And being both powerful, and slipping easily and directly into your own formulations, it got me excited ;)

Justin Walsh: I like it. "The Identity" lines up with my "Self-Image aka 3 Rules the Hero Lives By" and "The Essential Self" is similar to the end of my Jungian Arc.

I'd say this way of thinking about managing flaws and solving problems illuminates the subtle continuity of Freud and Jung's approaches to therapy. After all, Freud's goal was never cure so much as to arrive at functional management that would allow a patient to solve most of his/her life problems more effectively. Jung's spin on that might be seen as simply a more optimistic view of any individual's flaw.

Looking at it this way, Matthew Weiner's and David Chase's takes on Tony Soprano aren't that far apart at all.