How to Structure a Story Around a Large Problem: What's the Difference Between Problems, Flaws, and Goals? 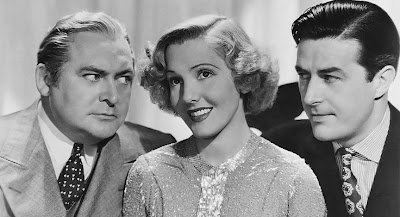 Surely someone in statistics has already discovered this phenomenon and named it, but just in case they haven’t, I will now propose Bird’s Law: Any sufficiently large data set will begin to self-replicate.  Which is to say: once you reach a critical mass of data, the data themselves begins to generate more and more results simply by interacting with each other.

This is the problem I had last week.  I decided that, in order to finally write systematically and definitively about structure, I had to do something I’d always resisted...  As I’m sure you noticed, I tend to postulate a rule and then cherry pick examples that prove my point while ignoring every movie that doesn’t. But this time, I wanted to figure out what percentage of well-regarded movies conformed to each step of my proposed structure, which means that I need a fixed, large data set.

For the most part, I generated that set unintentionally the week before when I progressed through seven genres and listed examples from each.  For this next project, I decided to simply use the resulting genre-by-genre movie list, after I excluded some movies that seemed like outliers, and added some others that I consider exemplary or their form.

But a funny thing happened.  As my chart grew more and more massive, it began to single out and expose various shortcuts I’d taken over the years.  For instance, here’s a question that I always fudged: what’s the difference between the hero’s “problem”, “flaw”, “false goal”, and “true goal”?  Are they always necessarily four different things, or do pairs of them overlap?

It quickly became obvious that I had always been vague about this, because I didn’t really know the answer myself.  Luckily my new data-set made many things clear.  Here’s what I discovered:
And so, in most cases, the hero is pursuing a surface problem without realizing that it masks a deeper flaw.  Unexpectedly, he or she will have to face that deeper flaw in order to solve the surface problem.

…But here’s a surprisingly common exception:
Here are some other variations:
So where does that leave the false goal and the true goal? And hey, wait a second, what about the dramatic question??  Where does that fit in?? Well, sometimes these things overlap and sometimes… Okay, let’s just share the first of this week’s big-ass charts.  This may clear all these questions up, or it may leave you helplessly confused.  Feel free to follow up in the comments, then we’ll move on to the next step… (Needless to say, click to enlarge...) 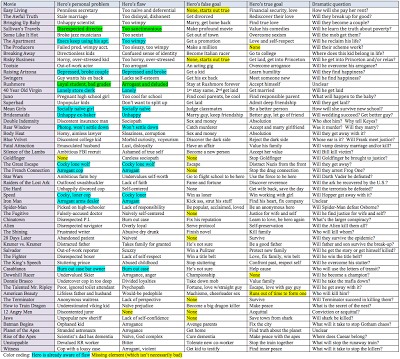 Nice work. I have a question regarding how the information is feed to the audience. It would seem to me that the hero is usually unaware of his/her flaw in the beginning (as you said), but the audience is made aware of it as soon as possible. Does your data confirm this?
Will it be part of the analysis?

So much comes from the gap between their knowledge and ours. Plus that's the way I've written it in my latest script and I just wanted to make sure I'm on the right track.

Excellent question. Yes, we should be aware of (or at least strongly suspect) the flaw very early, and be aware that the flaw is the flip side of the hero's strength.

Obviously, we should see the flaw ourselves, rather than have someone come up to the hero and say, "You what you problem is, Bob?"

(Sometimes we see the outward manifestation of the flaw early on but we don't really get the nature of it for a while, such as in "Breaking Away" or "The Talented Mr. Ripley".)

"Sometimes, the hero is trying to solve a totally non-existent problem, and the fact that he imagines this 'problem' is his flaw."

This could go for many a Rites of Passage type story and for many more screwball comedies.

Great, these are things I wonder about but cannot get them down due to a block (or I forget them soon after).