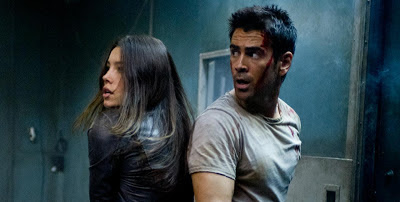 I didn’t need to see the remake of Total Recall to know it was bad.  All I had to do was look at the cast.  Colin Farrell and Jessica Biel were on nobody’s A-List in 2012.  The producers probably wanted Brad and Angelina, until they read the script and passed on it.

At least Farrell has talent, despite being box-office poison, but Biel has now made dozens of movies without ever having a single hit, or a single good review of her performances in those movies, as far as I know.  She’s a place-holder, not an asset. Her presence tells you that every bankable and/or talented actress in town turned down the part. There’s probably a good reason for that.

When you revise, you need to ask yourself: Do each of the top five parts have satisfying and original character arcs?  Of course, for the fifth-billed character, it might be a very lightly-sketched arc, but a little goes a long way. Likewise for every scene: Is that going to be a fully-engaged day on set for each actor?  Or are they going to be rolling their eyes and sleep-walking through it?  Is this something they’ve already done before in other movies, or is it something that nobody has done before in any movie.

It’s okay to introduce each character from the hero’s point of view, and even to sacrifice their likability to the hero’s in the early scenes, but you should quickly elevate several of them to the status of fully-compelling characters, and eventually you should let each have his or her own moment in the sun.

For as many parts as possible, write dialogue they’ll be excited to say, scenes that activate their imaginations, and parts they’ve always wanted to play.  You’ll have your pick of the best talent in town.
Posted by Matt Bird at 8:00 PM

I personally prefer not knowing anyone in the (main) cast, so I can't really understand this A-List Actor thing from a movie-goer perspective. Business-wise it makes sense of course.
Yes, you can definitely say that your points would attract A-List actors. Question is: do I even want those people?