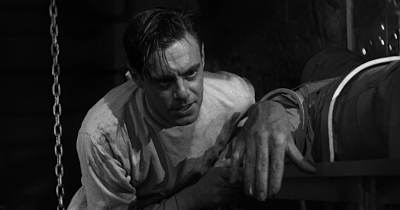 Yesterday, we looked at thriller, mystery/conspiracy, and action movies. The horror movie has much in common with all three, but it’s fundamentally different. In horror, the audience has less identification with the hero than in any other type of story.

In action and conspiracy movies, we identify with the hero the whole time. Even when the heroes are kicking themselves in the third quarter for being overconfident in the second quarter, we fully identify, since we shared their adrenaline rush, and we, too, failed to see the disaster coming.

Thrillers are trickier. We share the thrill of transgression in the second quarter, but we do see the disaster coming, and we withhold some of our sympathy even then. In the third quarter, when the sinning hero suffers consequences, we switch to a judgmental attitude and look down on the same transgressions that we just vicariously enjoyed.

In horror, we always empathize with the heroes, in that we share their fear, but we rarely sympathize, because their suffering is usually somehow their fault. The transgression usually happens much earlier, in the first quarter or before the movie starts, and we take no joy from it. Instead, our joy comes from a mix of sharing the heroes’ fear and sharing the evil force’s desire to punish them. As the advantage keeps shifting between the two sides, we win either way.

Transgression / Denial and Dread of Unseen Consequences / Horror at Visible Consequences / Triumph or Succumb:
Tellingly, even in movies where we don’t see any transgression, we’re so hard-wired to blame the victims that we spend the whole movie trying to figure out what the heroes might have done to deserve this, because they must have done something. You can see the audience dynamic in such movies as…

Tomorrow: Drama and Tragedy
Posted by Matt Bird at 8:00 PM

In general I'm loving this insightful series, but some of these examples seem a bit of a stretch. In particular, I think it's a strained reading to identify Ripley's ordinary assertion of protocol (which, if I take you aright, you characterize as a roundabout way of defending the company) as a "transgression." The real transgression in ALIEN is obvious: the other characters break quarantine by bringing the infected Kane aboard the ship.

What's interesting to me about this series is, how it illuminates -- like the work that Blake Snyder did -- the ways in which certain genre stories may seem to be one thing on the surface but actually function more like another different genre on the level of structure.

A number of films I think of as horror are probably more properly classified as supernatural thrillers -- THE SIXTH SENSE, THE OTHERS, THE RING. Yet the stories of these films play out more like mysteries, conspiracies or whydunits where the main characters spend much of their time solving the problem of the weirdness that's happening to them by playing detective: delving into the past, interviewing other characters and uncovering the truth.

I'm also struck with this entry at how similar the horror arc is to many disaster films. In fact, THE BIRDS and 28 DAYS LATER are arguably as much disaster films (about small ad hoc communities banding together to survive a calamity) as horror.

This series reminds me once again of how useful it is to look at any given story from as many different angles as possible.

j.s. said: "certain genre stories may seem to be one thing on the surface but actually function more like another different genre on the level of structure"

I think this is very important, because in general our definitions of genre are pretty fuzzy: horror=monsters, comedy=laffs, etc.

I wouldn't go so far as to say a comedy with a thriller structure is "really" a thriller (and I know that neither js or Matt was saying that--just using that as the reductio), but it helps to explain why certain films within a genre don't resonate with the usually fans of those genres. And it points to a more sophisticated way of talking about genre.