Rulebook Casefile: Conflict-Driven Exposition in Silence of the Lambs

Silence of the Lambs Week Concludes! 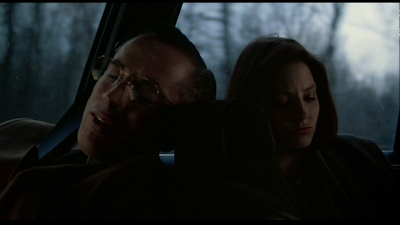 Adapting a book is always tough.  In a book, it’s easy to tell us what the characters already know without using dialogue: Just use first-person or omniscient narration.  But in a movie, the only way for the audience to learn what the characters know is to force them to say it out loud.

In Silence of the Lambs, there are lots of scenes where the boss, Crawford, and his trainee, Clarice, are relying on knowledge that they both share, but screenwriter Ted Tally has to somehow explain to the audience what they’re doing.

Obviously, the worst way to do these scenes would be to have them trade off insights interchangeably.  You see scenes like that all the time on the dreadful TV knock-off of this movie, “Criminal Minds.”

A slightly better way to do it would be to simply have Crawford tell Clarice all this information and instruction for the first time, catching her up on the fly, since, after all, she’s still a beginner.  That would be more believable, but it would cause three big problems:
Tally’s brilliant solution is to turn this case into sort of a final exam for Clarice.  Crawford keeps quizzing her about the facts of the case, what the standard procedure would be, and what she thinks they should do next.  This is better in several ways:
Part of what makes this work is that Tally only uses this method to tell us what we really need to know.  By contrast, when our heroes examine a body that’s been in a river for weeks, we see them rub weird white paste under their nose before they carve it open. 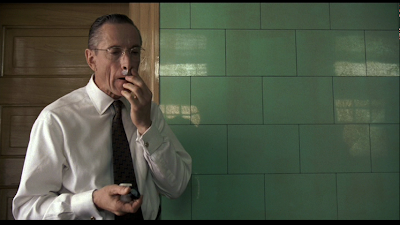 This isn’t explained, but we can guess that this is to counteract the smell.  Whenever possible, Tally lets us play catch-up...He reserves his neat little “final exam” trick for those times when we need the characters to narrate what they’re doing.)
Posted by Matt Bird at 8:00 PM

"Tally’s brilliant solution is to turn this case into sort of a final exam for Clarice."

Don't mean to be so one-note, but is it really about Ted Tally? Once again, aren't most of these choices inherent in the Thomas Harris novel? I can think of dozens of first-rate screenwriters who would have done pretty much the same thing -- also, in this case, the easiest thing -- and left them intact.

Forgive me if you've actually revisited the novel recently and are talking about choices I'm missing, but I've been looking at chapters and passages for examples of Tally's brilliant work and I'm mostly finding Harris' original, most of which made its way into the film virtually verbatim.

Sorry, J.S., I haven't read the novel, and yes, I did vaguely think, "Shouldn't I read the novel before I spend a week talking about Tally's choices?", but, alas, I didn't have the time. Draw what you can from my (always) limited perspective.

It's good to hear that a lot of this value was there on the page, so I look forward to getting to the novel at some point.