Storyteller's Rulebook #179: Be Happy to Start On the Ground Floor (UPDATED) 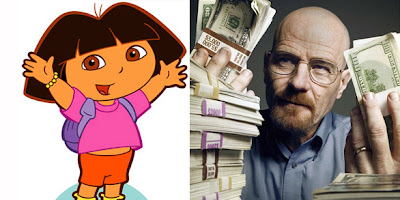 Here are two of the dangerous things a writer can think:
As Ira Glass points out in this great interview, you can’t confuse your taste as a consumer with your ability as a creator.  At the beginning of your career, you’re not going to be good enough to write for any of the people you really respect.  And you’ll probably never be good enough to write for your very favorite creators.  This just makes sense: There’s a huge difference between liking the very best and being the very best.  Your taste will, and should, always exceed your talent.
Here’s one of my biggest regrets of my career: One day in film school, I casually mentioned to my mentor that I’d had an idea for a tween show.  He liked the idea and suggested that he set up a meeting with a producer he knew in that world.  But I then realized that I didn’t really care enough to develop the pitch that far: “Are you kidding?  I’m busy writing spec scripts for all the deep, complex, dark shows on TV, and now you want me to change gears and pitch for some kiddie network I’d never even watch?”

A lot of writers say that you should never write something you wouldn’t watch yourself.  On the surface, this seems to make sense, but it doesn’t stand up to scrutiny: Do the writers of “Dora the Explorer” really love to watch “Dora the Explorer”?  The fact is that most unsophisticated kids’ shows are actually written by sophisticated adults…and that’s the way it should be.

So many of of us in film school would say “I love ‘Sopranos’, ‘Mad Men’, and ‘Breaking Bad’ because those shows prove that you don’t need a sympathetic protagonist!”  We failed to perceive that while, yes, those shows chose to sacrifice some sympathy, they made up for it by generating more empathy: we don’t like Tony, Don, and Walt but we do love them.

I have nothing but respect for those shows, but I now realize that part of their design is to flatter the audience in a very cynical way: On the one hand, they say, “You’re a sophisticated audience that doesn’t need likable heroes”, but on the other hand, they work extra hard to subtly manipulate us into loving them.

Of course, I only figured that out later, once I’d tried to create some unsympathetic heroes of my own and discovered that everybody hated them.

UPDATE: Two day after I posted this, the Onion AV Club ran a great interview with the supremely talented Graham Yost (“Band of Brothers”, “Justified”) where they talked about this:

This post is so helpful. It's so easy to dismiss those simple little ideas, and try to tackle my Big Ideas. I am going to re-consinder my less brag-worthy projects. Thanks Matt.

I do want to add, though, that even if you write a kids show like Dora, you can't totally hate what you're writing. I think that would show through. You can be mildly interested, and that's okay, since no adult it gonna love her as much as a pre-schooler. Shaun the Sheep and Animaniacs are great example of a kids shows that just as much fun for adults, since the writings so good.

Well, yes, if you want to write a show well, you have to either like it on some level or at least find an appreciation of it (I've never see Dora, but from what I hear it's actually pretty good. My toddler-daughter already somehow has Dora shoes, so it's just matter of time until I find out.) but part of being a working screenwriter is coming to terms with working on projects that you flat-out loathe, and still somehow doing a good job. I'll have a post about that at some point...

This is my blog on how Great Films Could Have Been Made Differently.

if you have time then please take a look.

I'm also looking to collaborate with a screenwriter.

Hmm. I don't know. This post reminds me of a false dichotomy I used to think of often which I refer to as Unicorns vs. Art.

I used to joke in film school that I'd write any kind of film for money except "a unicorn movie." That was my limit. Perhaps I was arrogant in thinking it was beneath me. But I was also correct in understanding that the very best version of such a thing was beyond me. Because I had (and still have) absolutely nothing to say about unicorns or to the kids who care about them. Cut to a few years later when a film school acquaintance actually made his version of a unicorn movie (as an Indie film no less!). And, though I've never see it, it certainly looks as corny and obvious as his other work. Turns out neither one of us was cut out to reboot MY LITTLE PONY into FRIENDSHIP IS MAGIC, though his attempt made way more sense than mine ever would have.

So if this was really a missed opportunity then where are all the other Matt Bird 'tween pilots and franchise specs? Instead, didn't you really internalize this lesson in a much subtler direction by ending up creating more commercial and less angsty versions of the dark crime/thriller stories that obsessed you then and now?

Shoot, I want to read his sonnets. He's absolutely right about the ability of closed forms to force you into solutions and leaps you'd never see otherwise. Excuse me while I go herd my avant gard, experimentalist students over here...