Storyteller's Rulebook #176: There's No Such Thing As A Bad Note 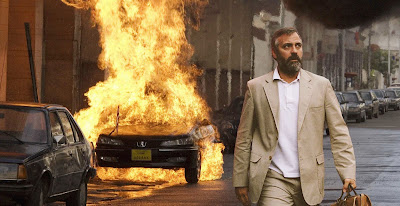 There’s no such thing as a bad note.  Every note is an indication of an unmet expectation, and that’s always good to know.  The problem is that most notes come in the form of suggestions for changes, and the changes they suggest are often terrible.  The trick is to see past the bad suggestion to the good note underneath.

Here’s a classic example.  I had written a dark TV pilot about the CIA, and I showed it to my sort-of mentor at film school.  He read it and liked it but he said that I needed to add a scene at the beginning where our undercover hero planted a bomb and then calmly walked away while it blew up.

I was totally aghast: What a horrible note!  Those scenes are so idiotic!  Failing to react to an explosion doesn’t show that you’re a cool unflappable spy, it shows that you’re an bumbling amateur: Obviously, if you’re the only who doesn’t act surprised by an explosion, then you’re the one who set it, and everybody’s going to instantly tackle you.  And even if these scenes weren’t silly to begin with, by now they’ve become painfully predictable clichés!  I can’t believe this guy wants me to add one of those stupid, stupid scenes!

But all he meant, I later realized, was that I should include that type of scene: a bit of bad-ass, exciting, I wanna-be-that-guy spy action, before I got to all the intrigue, political infighting and moral recriminations.

I could have blanched and said that that wasn’t the sort of show I wanted to do… After all, I wanted more a LeCarre-type show about double-crosses and unexpected real-world consequences, but I then realized that this was all the more reason to begin with a scene that satisfied the urges that get people to watch this type of show.

I wanted my show to be subversive, but if I started downbeat and finished downbeat, then I would merely be attracting downbeat viewers and, in the end, fulfilling their expectations.  Instead, I wanted to take normal spy fans and subvert their expectations.  That meant that first I had to create false expectations about the greatness of my heroes and the efficacy of spy work.  That way, when it all unravels, the audience will feel shocked and unsettled. It’s impossible to subvert expectations you didn’t create.

So how do you take the note, but not the suggested fix?  You have to replace the hoary old suggestion with something fresh: in this case, either a unique twist on a classic spy behavior or, even better, some real-life bit of bad-ass tradecraft from a non-fiction book (as long as it’s instantly visually obvious why it’s cool, without you having to explain.)

P.S.: I've posted this before, but I can’t resist doing it again, because I love it so:
Posted by Matt Bird at 8:07 PM

This is exactly why the stellar Le Carre film adaptation of TINKER, TAILOR starts the way it does, distinctly different from the miniseries and the novel. We're right in the middle of all sorts of intrigue and action. There are even obvious ludicrous cheats of tradecraft to let us in on this world and to create expectations about what sort of cool stuff we're going to see if we stick with it. Control barks out (of his well-lit front door, no less) to Jim Prixdeaux: "You weren't followed?" There's about half a dozen things wrong with that declaration, just like the non-reaction to explosions you've mentioned. And yet it's sort of necessary concession to the audience at this moment in the story.

Later, there's another different and far larger cheat with Smiley's lighter, this time sacrificing tradecraft at the altar of character development and audience identification. Smiley's off on a secret mission to meet his arch rival, almost certainly under an assumed identity, yet he takes with him a lighter that has an inscription from his wife with both of their true names on it and he hands it over to the bad guy? Le Carre himself was a spy, so he knew exactly what he was doing with these tradeoffs.

But at the same time, books like "Legacy of Ashes", "Charlie Wilson's War", "Ghost Wars", and many others read like a litany of such blunders.

This is why "The Sandbaggers" is so great: each episode shows how serious, non-incompetent spies nevertheless end up in a never-ending series of screwed-up fiascos with deadly consequences, simply due to the self-defeating nature of their work.

The more I think about these kinds of questions, the more I imagine you could make a really great Cockeyed Caravan series out of such considerations -- Reality/Research/Procedural Accuracy vs. Storytelling/Drama/Genre Expectations/The Needs of An Audience.

Details that are true but that kill the drama or stop the story its tracks to the point where almost everyone -- including former experts in the field devoted to more realistic storytelling -- ignores them.

Details that are true but might actually seem too simplistic or cliche to genre aficionados who think they know more than they do about the real world of crime/espionage etc. than they do because they've watched too many less accurate films.

Details that are true but so unbelievable outside the context of expert knowledge that you can't use them.

Maybe work in some specific examples of good cheats, where the tradeoff between accuracy and drama didn't undermine the overall truth of the imagined world. And of bad cheats, where what's perhaps a lazy choice lead to a bit of storytelling/drama that was less interesting and effective in many ways than something more authentic would have been.