How To Write Every Day, Part 1: Pitches Are Fantasy, Pages Are Reality

When we discussed this before, I wasn’t sure whether or not writing outlines should count towards daily writing goals, but now... 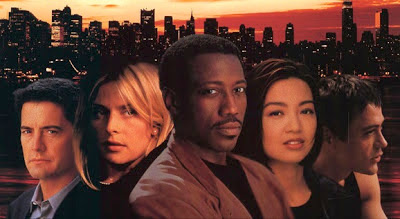 Whenever any profession hits a new peak in pay, even if that peak is the result of speculative bubble, the practitioners instantly declare that peak to be the new normal, and any decrease, even it’s just a decrease to previous norms, will forever after be seen as unforgivable.

So it was with screenwriting.  During the spec script bubble of the early ‘90s, studios lost their heads.  They were overpaying for scripts, and even paying princely sums for movies that hadn’t been written.  In the most infamous example, Joe Eszterhas scribbled a pitch on the back of a napkin and sold it for four million dollars.  The movie was called One Night Stand with Wesley Snipes.  Ever see it?  Me neither.

After the flop of that movie and many others, studios cut their spending way back.  Soon, with a few notable exceptions, they stopped buying pitches and returned to their previous policy of only buying finished scripts.  To this day, screenwriters lament the end of the glory days, and await the day when we can once again sell ideas before we write anything.

But the studios are right: Pitches aren’t worth anything yet.  This is actually true in a court of law: You can’t copyright an idea.  You can only copyright the expression of an idea.  Only pages are valuable, and that’s the way it should be.

For years, whenever I would try to force myself to write everyday, I would start out writing actual pages, but after the pages stopped flowing, I would start writing outlines for future stories instead.  What’s the difference?  It’s all writing, isn’t it?

No, it isn’t.  Anything other than actual pages is just pre-writing.  Don’t get me wrong, outlines and treatments are very important, but you can’t confuse that with real writing.   What would inevitably happen when I would switch to writing outlines, is that I would never want to switch back. Pre-writing is addictive because it’s a lot more rewarding than writing pages.  Potential is always better than reality.

Before you start writing, you can say, “What’s my movie like? Well, let me tell you: Imagine that Han Solo and Hannibal Lecter have to team up free the guys from the Great Escape!” That sounds great!  What a cool idea!  Then you sit down to write it and you realize that, unless you’re writing an especially silly (and yet awesome) piece of fan fiction, you can’t just appropriate the pre-existing value of those characters. Instead, you have to re-create all that value from scratch, which is damn hard.

It’s one thing to say, “My new character is going to be like Han Solo”!  It’s entirely different to say, “I just wrote some pages and the new character I’ve created is just as appealing as Han Solo!” The first is worthless, the second is priceless.

So if you shouldn’t switch to outlines, what should you do when the pages stop flowing?  We’ll pick up there tomorrow…
Posted by Matt Bird at 8:00 PM

I'm curious if you've ever written a scriptment (I'm thinking in particular of something like James Cameron's work on TERMINATOR). Because sometimes a more detailed prose document with minimal dialogue centered on the story yet with enough detail to sketch out each scene is a better first step than a meticulous outline or a sloppy vomit draft.

Btw, I have seen ONE NIGHT STAND. The best moment is early on when Snipes' wife tries to micromanage their lovemaking: "Circles, honey, circles," she scolds him. No wonder he goes for Kinski.