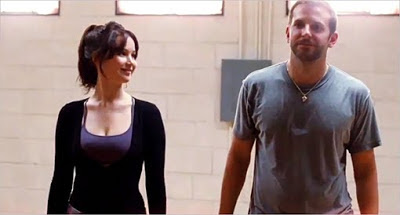 [SPOILERS AHEAD]  You all know what a fan I was of David O. Russell’s last movie, and I think of him as a very underrated writer/director in general, so I was very excited to see that his new movie was getting a lot of glowing reviews and Oscar buzz.  And indeed Silver Linings Playbook is worth watching …but I found it to be ultimately disappointing.

What was mortifying was that the script would have scored very high on my Checklist: Volatile hero?  Check!  Knows exactly what he wants but not what he really needs?  Check!  Three rules he lives by?  Check! Invests objects with emotion?  Check!  Escalating conflict?  Check!  Internal dilemma and external plot climax at the same time?  Check!

And yet each of these rang a little hollow.  Indeed, this movie makes for a good look-back, because, according to the rules I had before 2012, it’s pretty perfect.  But the movie sort of falls apart, in my opinion, because of the issues I’ve been discussing in the last few months: It creates false expectations, it has an inconsistent tone, and most importantly, it gets the motivates/complicates equation backwards.

This is the very definition of a “Character Motivates, Plot Complicates” movie: Bradley Cooper starts the plot into motion through sheer force of will: He chooses to leave his mental hospital and pursue his ex-wife, entirely at his own volition.  Everything that happens in the first half are things that he made happen as a result of his volatile personality.  But, as so often happens, this plot-driver runs out of juice halfway through, and the movie needs to throw in a bunch of forced plot complications in the second half.

And this brings us to the tone problem.  The first half of this movie is a very naturalistic, low-key dramady, and we happily settle into that rhythm, but the second half jumps to a different sub-genre entirely as it becomes a very formulaic romantic comedy (“We have to win this dance contest so that my dad can buy his own restaurant!”).  There’s nothing wrong with this sort of ending (screwball comedies often pulled it off) if the beginning of the movie set us up to expect it…

…But this movie creates exactly the opposite expectations.  Our hero, at the beginning, is a no-bullshit truth-teller who has no tolerance for phony sentiment, and we like that about him.  The hero and the movie feel very real and raw.  Once this tone has been established, it’s okay for the hero to change and become more sentimental, but the tone of the movie shouldn’t change with him: the style needs to remain real and raw, because that’s the world that we’ve accepted.

As I said, the movie is still worth seeing, if only for the excellent performances from Bradley Cooper, Robert DeNiro and Jennifer Lawrence, but be ready for some tone-whiplash.
Posted by Matt Bird at 8:00 PM

I haven't seen this movie but it reminds me of Pixar's recent hit Brave. I actually wrote a lengthy post on Brave's shortcomings along with a few suggestions and what I think it really is.

I'm curious what your take is on Brave. My post is here: Did Pixar drop the ball with Brave?

I unfortunately missed Brave, but Betsy saw it without me and, by coincidence, was just reiterating her "Eh, I liked it okay" reaction before I read this. I'd still very much intend to see it though, so I can't really react until I have.

I still think I HEART HUCKABEES is Russell's masterpiece and a prime example of how to set up and manage expectations in a film with a completely unique tone and uncommonly rigorous intellectual and aesthetic intentions.

A shame the world may never get to see his comedy about politics NAILED, which he co-wrote with Al Gore's daughter.

I adore Huckabees. Russell is really underrated as an actor's director. There are about ten great performances in that movie. Jude Law and Naomi Watts are both fantastic in their small roles.

Could he have gotten a good performance from Jessica Biel in Nailed, if it had been completed? I have a hard time believing that, but if anybody could...