Now You Can Revise, Conclusion: You’re a Poet But You Don’t Know It. 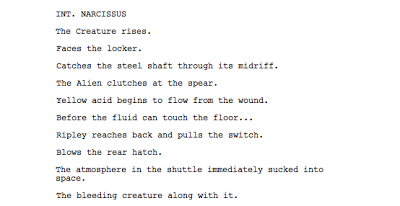 There’s one aspect of screenwriting that I’ve never discussed on this blog: the quality of the prose in your descriptive paragraphs.  I’ve avoided it because many beginning screenwriters are way too focused on this tiny aspect of the art.

As Carson at Scriptshadow likes to point out, screenwriting is 99% storytelling and 1% writing.  If you’re telling a great story, no one will care very much about the quality of your prose.  On the other hand, if you’ve got a sloppy story and you’ve wasted hours dressing it up with Ellroy-style cool-cat descriptions, then your reader will be infuriated.  Your screenplay is not “professional” just because you took out all the pronouns.

But, with all that said, there is something to be said for bettering the quality of your prose, just enough to get people to actually read it.  Most screenplay readers, including myself, get in the habit of just glossing over the prose paragraphs and only reading the dialogue unless we lose track of what’s going on.  Why?  Because the prose is usually just too turgid to wade through.

The danger is what John August calls “Dungeonmaster prose”, wherein the screenwriter categorically describes the size, shape, and contents of each room, as if walking the reader through a “Dungeons and Dragons” module.

In reaction to this, some screenwriters have adopted a “macho haiku” style, as perfected by Walter Hill’s screenplay for Alien (and never successfully replicated by anyone else.)  The problem is that, in the end, you are more of a dungeonmaster than a poet: you really do need to describe everything well enough for your reader to picture the setting and understand everything that happens.  When I read these macho pronoun-less screenplays I usually can’t figure out what’s going on.

The trick is to describe just enough to set the scene without boring the reader.  And yes, along the way, you want to have punchy, fun prose. Here are some dos and don’ts:
Punchy, high-impact sentences reward your reader for reading.  The way to do this is to embrace your inner poet, and I mean Frost, not Bukowski.  It wasn’t until I did some work crafting advertising taglines that I realized how basic the connection was between catchy writing and old-fashioned poetry: it’s all about alliteration, assonance, parallel construction, and, yes, rhyme.  At first I blanched: I can’t really rhyme, can I?  That’s so tacky!  People won’t be able to take it seriously!


Then (and this literally happened) I looked over at the cover of the book I was reading, Naomi Klein’s rousing and deadly serious economic history of the last half century, “The Shock Doctrine”.  And I suddenly realized: “Hey, that title isn’t merely descriptive!” It rhymes!  And that makes it more memorable, which makes it more powerful.  She did that on purpose!

Remember two entries back, where I ended my post by saying, “Every choice is a chance to multiply the meaning.”?  You’re allowed to get away with stuff like that. Don’t knock our socks off, but don’t be afraid of punchy sentences, either.

But whatever you do, and this is the last time I’ll say this, don’t worry about the prose during your first draft.  Just clarify everything.  You’re going to have to change it all anyway, so all that work would be for nothing.  Punch it up once you’ve done everything else.  And now... you’re done!
Posted by Matt Bird at 1:00 PM

I agree that you can't overstate the pitfalls of Dungeonmaster prose.

Though I think you're underselling the use value of description on any given draft. Part of it for me is simply immersing myself in the world and selling the story to myself as a reader. I know I'm not the only one who feels this way among my peers. And I've heard Tony Gilroy talk about this too, about obsessively reworking his description -- especially in key moments -- in order to nail down the tone for himself.

Part of the reason why Walter Hill's "macho haiku" style hasn't been bested yet (except maybe in his own script for THE DRIVER) is because of the standardization of the screenwriting format via software programs. It was actually easier to write that way with a typewriter! Ever tried writing like Walter Hill without being able to customize your action/description parameters? It looks and feels terrible. You need that extra white space to write true action haiku and to take it in on the page as a reader. Honestly, I kind of wish it were easier to customize software. I'm not sure the industry standard is always 100% perfect or couldn't use a little tweaking depending on what the project is and whether it's a spec draft mostly for reading or a shooting script.

Hill's style remains a huge influence on just about every macho genre still being written. And he's got some worthy descendents like Shane Black ("The building vomits flame!"). I think it would be a mistake not to partake of some of this influence. Because if you use it judiciously it's maybe the most economical way to approximate the feeling of certain big genre moments and striking images.

Frost instead of Bukowski. I adore you.