How to Manage Expectations, Addendum: Know the Dramatic Question 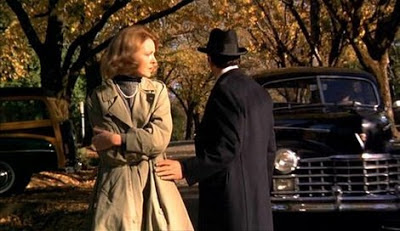 As I wrote the preceding series, I kept circling around a definition that I never really nailed down: What is the “dramatic question”?


The primary purpose of the dramatic question is to let the audience know when the story will end.  What will constitute the final victory or failure?

In many stories, the dramatic question is so obvious that the writer doesn’t have to worry about clarifying it: Will the couple find true love?  Will the hero defeat the villain? Who killed that dead body that was discovered in the first scene?

But in other stories, the dramatic question is not immediately obvious, so the writer has to carefully shape it in the audience’s minds.  I’ve given the examples of Charley Varrick and Never Cry Wolf a few times now, but in both cases it still would have been fairly obvious that the movie was over, since each movie ends with the hero leaving town.  In these cases, the question was intended to make an anticlimactic ending more satisfying.

But let’s look at stories that truly need the dramatic question to be stated.  The Godfather is a long, sprawling movie.  Our hero Michael even leaves town in the middle, hangs around in Sicily for a half hour of screentime, and then comes back for the final stretch.  The primary relationship, between Michael and his dad, ends halfway through when his dad dies.  The secondary relationship, between Michael and his fiancé Kay, seems to end when Michael weds someone else in Sicily.  Why doesn’t the audience get (overly) frustrated?

Here, too, the end date is planted in our mind subtly at the beginning of the movie, when Michael tells Kay, “In five years, the Corleone family will be completely legitimate.”  So the dramatic question becomes, “Is that true?”  No matter how many ups and down and beginnings and endings Michael experiences over those long five years, the ultimate question remains unanswered, so the audience is willing to go along for the ride towards that five-year deadline without saying, “Jeez, I thought this movie was over an hour ago!”

This, I now realize, is the primary purpose of framing sequences, flashforwards, and past-tense voiceovers: If a story (American Beauty, for instance) does not have an obvious dramatic question, then you must pose one at the beginning by indicating what event we’re building towards in the future. 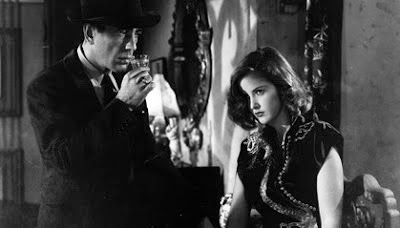 Keeping a movie going past the end of the dramatic question is exasperating for the audience, even if they like the movie.  In The Big Sleep, the original mystery is solved 2/3 of the way through, leaving the audience baffled as to why the movie keeps going. 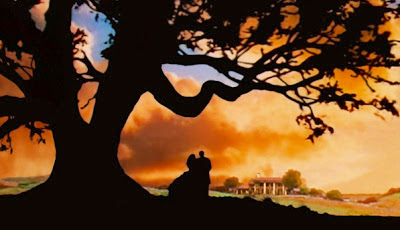 And Gone with the Wind never fails to exasperate me: The war ends, Tara is restored, the couple seems to break up definitively, then get back together definitively, then marry, then have a kid, then on and on and on.  Even when Rhett finally leaves Scarlet at the end, I don’t really buy that it’s for good.  What is the dramatic question here??  Unlike in The Godfather, this sprawling epic saga doesn’t seem to have a pre-established end point. No dramatic question unites the movie.
Tomorrow: Unfinished business…

Could it help to think of these questions more in terms of character?

Isn't the dramatic question in GONE WITH THE WIND something simple like "(How) Will Scarlet Survive?"

I've always thought the question in THE GODFATHER was more like the one Michael himself raises at the opening wedding: "That's my family, not me." And the film is over when we learn this isn't true.

XMAS MOVIE SPOILER ALERT: The most recent blatant dramatic question fail I've seen is in Tarantino's new film, which goes on for about 25 minutes after it's mostly answered. Everything after plays like the indulgent and boring delay tactic it is.

If that's the question of Gone With the Wind, then my answer is that, frankly, I don't give a damn.

I would say that the quote you cite from The Godfather sets up Michael's character dilemma, but the dramatic question is a different thing: It says "What will be the culmination of this plot?"

How about "Will Michael become the kind of Corleone he fears/disdains?" I guess I see what you mean about the family going legit. It's a broader question and one that does cover more mundane details of the plot. But somehow that question feels less compelling to me than the one about Michael's character. And the family moving to Vegas seems mostly about setting up conflicts for the final act rather than anything uniting the whole picture, which feels to me like it's more about gang war, fraternal and filial piety and succession.

The central dramatic question is what makes the end of "The Sopranos" so good. That question could get lost in the drama of particular episodes, but it was always there in the opening credits.

That cut to black was the perfect ending, because it told you exactly what the answer to the question was, and not a bit more. And it sure as hell wasn't "Does Tony die?"

Or "does Journey suck?" Because we all know the answer is "yes." I'll stop believin' if I want to, Steve Perry.

Wait, Harvey, you didn't say what the question was! I'm guessing you're referring not just to the title sequence but the song that goes along with it. And that the overarching central dramatic/thematic question of the SOPRANOS for you is something like: "Will he who lives by the gun die by the gun?"

The dramatic question of "The Sopranos" was suggested by the opening credits: how Tony and his family live in the gap between mob life and modern American life, the old ways and the new.

"Will Tony die" wasn't the question. The question was "will any of them ever escape mob life?" The last season, and the last episode in particular, hammered it home: no. Every single member of the family had a chance to get out and didn't take it. (In Tony's case, Dr. Melfi represented a different life -- not being with her, but as a symbol of and access to the non-mob world. The other family members had it more directly.)

Thus, it doesn't matter if Tony gets shot or not, because his story is over. The family's story is over. Each one could have changed and refused. Not just failed, but refused. They're in the mob for life.

The sudden cut to black was the end of hope.

An interesting interpretation, although on the level of plot that ending is completely and unambiguously a death as far as I'm concerned, and I beleive very clearly set up to be read as such. How about "Will Tony be able to balance between his two 'families' without one destroying the other?"

Hey, I just have to say that Gone with the Wind is the Classic Romance Love Triangle, so the central question is "Who Does Scarlet love?" And even while she's married to Rhett, she still thinks that she's in love with Ashley. It's only at the end, does she realized she's loved Rhett all along. Twilight is another love triangle that answered it's dramatic question at the BEGINNING of book 4, "Who does Bella marry?" And thus the rest of Breaking Dawn is pointless.