How to Create a Polarized Ensemble, Part 3: Maintaining The Ensemble 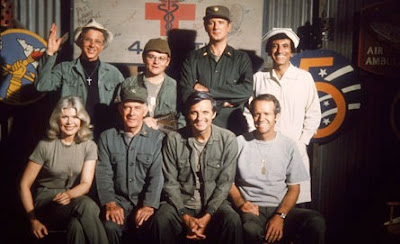 Maintaining a polarized ensemble for years can be a tricky proposition. One problem is that all characters have a natural tendency to become more three-dimensional over time. This is inevitable and not entirely bad: as audiences fall in love with characters, they want to see more sides of them, and actors certainly appreciate the chance to play more than one note.

But it can also be a problem. Fans of the TV version of “M*A*S*H” complained that, as the show went on, the characters had become too even-keeled and less funny as a result. Characters like Houlihan and Winchester, who had once been outrageous antagonists, had become likable characters, resulting in less comedic escalation.

Another problem with maintaining a polarized ensemble comes when you have to replace cast members. If you’re replacing more than one character at a time, you can theoretically flip the polarization of their replacements, but most shows only replace one character at a time, so the creators must find a replacement character who fills the same emotional role as his/her predecessor, which can seem overly formulaic.

Nevertheless, this usually works out better than the alternative. Let’s look at two cast changes on “Cheers”. When the great Nicholas Colasanto died suddenly at the end of the third season, the producers were in a bind: The show had two heads and three guts, but only one heart character, so they had to somehow replace Colasanto’s “Coach” with a very similar character.

They solved the problem elegantly by creating Woody Boyd. Superficially, he was entirely different from Coach: a young Indiana farmboy instead of an old Greek baseball coach, but he had the same heart, so the ensemble didn’t lose a beat. 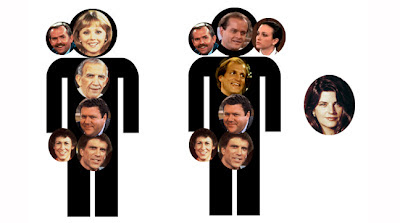 Unfortunately, the next time they had to replace a cast member, they tried to get more ambitious. When essential co-star Shelly Long left after the fifth season, they decided to go a different route. Here’s casting director Jeff Greenberg from an excellent oral history of “Cheers” that appeared recently in GQ: “The producers wanted the opposite of Diane, someone who was grounded and not flighty.” Unfortunately, their choice was too grounded. Kirstie Alley did her best, but she was stuck with a less-than-extreme character that didn’t fit in with a polarized ensemble.

A more recent example is “The New Girl”, whose producers had the bad luck to have to lose a cast member before their second episode. Damon Wayans Jr. starred in the pilot because he thought his other sitcom “Happy Endings” would get cancelled, but when it got a last minute reprieve, he had to bow out.

From what we saw of him, Wayans’ character was extreme and very funny: an overzealous personal trainer (a “spleen” character, if you will).  I get the feeling that the challenge of replacing him was probably exacerbated by concerns about race sensitivity. The producers seemed to feel that they were caught in a trap:

Pity the poor writer navigating America’s racial minefield! (But not as much as, you know, actual victims of racism, who have it a little worse) 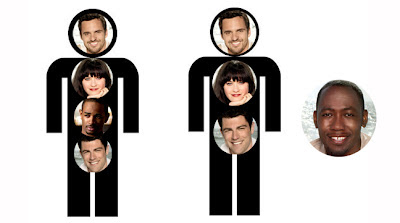 As a result, they felt that they had no other choice but to pull a Rebecca and add an even-keeled replacement to the polarized ensemble.  Luckily they cast a funny and likable actor in the role of Winston, and the show’s excellent writing staff have found plenty of ways to integrate his laid-back character into the show’s dynamic… but Winston still seems somehow vague compared to the rest of the cast. Whether he polarizes more over the course of the show will be interesting to watch.

Let’s look at one final example: “How I Met Your Mother”. When the show began, we had a tightly-knit, classically polarized four-person ensemble, and a fifth character who was a somewhat cryptic object of desire. Robin wasn’t really a character, she was just a mystery for Ted to solve. Once their relationship had run its course, Robin kept hanging around, somewhat awkwardly. Like Rebecca and Winston, she was an even-keeled character who seemed out-of-place in a polarized ensemble. 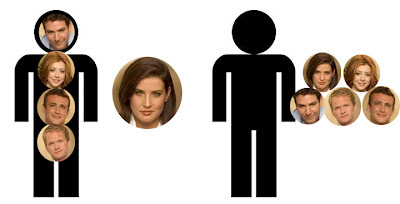 But these days she fits in just fine. This isn’t because her character polarized but because the rest of the ensemble de-polarized: Ted learned to trust his gut, Barney grew a heart, Marshall became more responsible, etc. As with “M*A*S*H”, the sharp edges fell away. Now we have five un-polarized characters. On the one hand, that means less potential for hijinks, but it also means that the audience feels gratified that our emotional investment in these characters’ growth has paid off.

Okay, we’ve got one more piece that spills over into next week, in which we look at another type of odd beast: the partially polarized ensemble…
Posted by Matt Bird at 8:00 PM

I'd argue that the rest of the ensemble (Barney especially) may have de-polarized, but they have also corrected in the other direction by making Robin crazy in her own ways.

Certainly the episode where I finally fell in love with Robin was the one where we found out about her Canadian teen popstar past, but even there, that was a crazy thing she *used* to do, that she was now embarrassed by.

I don't quite understand the analogy of a 'spleen' character. What are the traits of that?