How to Create a Polarized Ensemble, Part 2: Two-Way and Four-Way Polarization 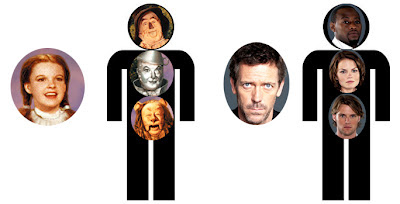 Not all polarized ensembles are neatly divided as Kirk, Spock and McCoy. There are lots of other ways to slice and dice a group. Let’s look at a couple of ways to polarize a four-part ensemble. In the most classic version, you have a fairly 3-dimensional lead character with three polarized advisors to act with the characters uses as sounding boards, representing his/her own head, heart and gut, as seen above.

Despite their protestations to the contrary, the scarecrow in The Wizard of Oz is clearly head, as the tin-man is heart and the cowardly lion is gut. As for “House” there was actually an episode where Dr. House had to make a diagnosis on plane without his interns around. He realized that he couldn’t think straight without three advisers, one of whom was brainy, another who was caring, and a third who was self-interested, so he appointed three random people on the plane to play those roles!

Here’s two more examples... HBO has made the same show twice: a 3-dimensional New York essayist writes about the post-feminist woes of her generation, taking her examples from her three friends: a naïve romantic, a promiscuous risk-taker, and the smart, responsible one who gets frustrated by the boring men she gets stuck with.  Here’s how “Sex and the City” and “Girls” break down: 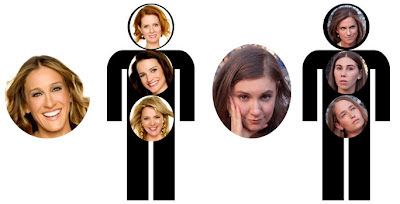 Another way to polarize a cast of four is to split the gut role into two: the boorish slob and the cocky, impulsive one.  Examples of this include “The Fantastic Four”, the original cast of “Cheers” (We’ll see how they changed tomorrow), and “The Simpsons.” 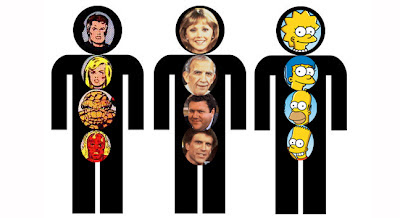 Yet another way to polarize a quartet is to add a fourth element floating above the other three: Faith. (Thanks to commenter Mark for pointing out that the Three Musketeers belong in this group. The pictures are from Alex Toth’s animated version of the story): 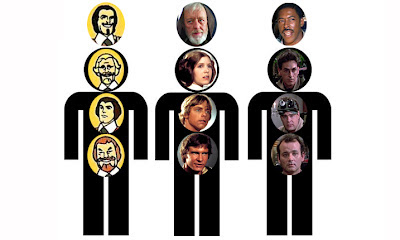 But what about a show led by two people? 2-way polarization is a bit more unpredictable. As with 3-way polarization, the two characters add up to one whole person, but each pairing is different, split along the lines of a fundamental dilemma that is universal to human nature:

Okay, tomorrow we’ll look at the pitfalls that can occur when a polarized ensemble goes through a shake-up...
Posted by Matt Bird at 8:00 PM

I'm a little confused about the 2-way polarizations. Part of the problem may be that I'm not very familiar with your examples, but are you saying that these are 3D characters with different worldviews, or 2D characters, each with a different set of 2 dimensions, or . . . something else?

Well, they're each one half of a whole person who complete each other, so they're each... one and a half dimensions? Did I mention that math is not my strong suit?

(Just to confuse things, I'll be talking about 2D characters in Part 4, by which I'll mean something completely different. I apologize.)

Actually, I should probably clarify in a less flippant way:

I’ve appropriated that terminology but discarded the geometric metaphor in favor of a Freudian one. I’m referring not to length, width and depth, but to Freud’s concept of the three parts of the human personality, ego, super-ego and id, which I’ve renamed head, heart and gut.

In my version, 1D, 2D, or 3D refers to how many of these aspects the character demonstrates.

However, as you point out, this 3-way split no longer applies when I talk about 2-way polarization, so I discard the metaphor entirely and define the split along the lines of a thematic dilemma. Hope that clears that up.