Storyteller's Rulebook #139: Simplify It (Or They'll Do It For You) 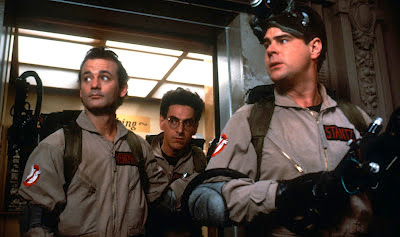 Ghostbusters was sold to the studio in the form of a 40 page treatment.  It was set in the future.  New York had been under siege by ghosts for years.  There were dozens of teams of competing ghostbusters.  Our heroes were tired and bored with their jobs when the story began.  The Marshmallow Man showed up on page 20.  The budget would have been bigger than any movie ever made, and far more than anybody was willing to spend.

So why did the studio buy it? Because they liked one image: a bunch of guys who live in a firehouse slide down a pole and hop in an old-fashioned ambulance, then go out to catch ghosts. So the studio stripped away all the other stuff, put that image in the middle of the movie, spent the first half of the movie getting us from a normal world gradually towards that moment, and spent the second half of the movie creating a heroic payoff to that situation.

When studios buy a high-concept story, more often than not, they’re just buying one element that they like from a big, weird sprawling mess, then they take that image out and plop it into an elegant, simple, pre-established structure.

A few years after the success of Ghostbusters, one of the writer/stars of that movie, Harold Ramis, signed up to direct someone else’s script. In the first draft of Groundhog Day, the weatherman had already been repeating the same day for 10,000 years. Everybody loved it, but most directors told screenwriter Danny Rubin that they would want him to rewrite it so that it started out with the origin of the situation. Ramis won the bidding war by promising Rubin that he would stick to the medias res version. 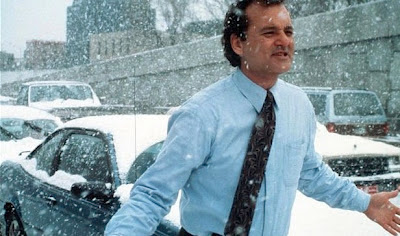 Guess what happened? By the time the movie made it to the screen, they spent the first half of the movie getting the weatherman into that situation, and spent the rest of the movie moving him towards the most heroic solution.

Can anybody dispute that the studios did the right thing in both cases? Would you really like to give up the beloved finished versions of Ghostbusters and Groundhog Day for those original versions?

This brings up the question: how did those scripts end up so overly complicated in the first place? Why start each script so far in the future, instead of starting at the beginning? The answer, I think, is that it seemed perfectly natural to the writers to write about heroes who already had been living with these situations for years, because, by the time the writers completed that draft, they, too, had been living with that situation for years.

If their process is anything like mine, they probably had the germ of the idea years before, then had a long time to get comfortable with it, so comfortable that the original idea didn’t seem novel enough anymore. Instead, they became interested in the permutations of the idea: What if there were lots of ghostbusters? How would the weatherman feel if he’d already been stuck in this loop for centuries? They’d forgotten just how strange the original idea was in the first place.

When your audience sits down to watch a movie, they’re at zero. No matter how hard you slam down the gas pedal, they’re going to take a while to rev up…so long, in fact, that by the time they’re at top speed, it’ll already be time to start looking for the off ramp. All you’ll have time to do, when all is said and done, is to get your hero into a strange situation and then have your hero triumph over it. If you want, you can compound that strangeness a thousand times over, but the studio is just going to strip all that away.
Posted by Matt Bird at 10:28 AM

This is dead on. And it speaks to other posts you've had about writing one's best ideas into stories quickly, not saving them or letting them marinate for too long. Once you get bored with your own good story ideas you also lose touch with how the audience might best enjoy experiencing them for the first time. And it also reminds me of a post you had on New Yorker cartoon captions. How, after seeing hundreds of them, the weirdest ones tend to stick out and therefore win. While the best captions, which are usually simpler and speak more directly to the image at hand, are not so show-offy.

Fun fact: while I was on hiatus, I would occasionally tweak older entries. Indeed, in the entry you mention, I found a better example of three egregiously bad choices for New Yorker Caption Contest, so I switched it out: http://cockeyedcaravan.blogspot.com/2011/07/big-idea-part-4-are-there-too-few-good.html

Hmm, after mulling over your post, I think I need to go back and re-write my graphic novel script. Sigh....

Good to have you back!

Where you do come up with these amazing blog topics? This has given me so much to think about.