How to Re-Write, Part 5: Don’t Paper Over the Problem 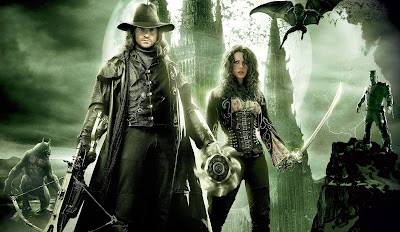 I love it when I’m watching a troubled movie and I can actually see the studio’s notes being physically inserted into the text before my very eyes.

My all-time favorite example was in Van Helsing.  Some producer obviously read a book that said every hero needs to have a spiritual crisis in which they engage in “self-realization”, so he demanded that the writer toss some of that in. And so, after a full hour of back-to-back action scenes, Hugh Jackman and Kate Beckinsale suddenly decide to take a thoughtful walk around the grounds of a castle, where they have this delightful 19th century conversation:
Psst, Van Helsing, your notes are showing!  Okay, let’s take a tour of the various ways you can fix your problems, from the worst to the best:
The thing you have to remember is that the goal of a re-write should always be to simplify the story, not complicate it.  The ultimate goal should be to have a simple story about complex characters, and not vice versa! With each draft, your characters should become deeper and richer, while the story becomes more streamlined and elegant.

Tomorrow we’ll look at ways to pair up and then knock off your problems...
Posted by Matt Bird at 6:30 PM

Not sure I agree with the ranking of your solutions. You identify the INCEPTION tactic as the "worst" way to solve a problem, but its crime is simply bad timing: the question of killing is legitimate and deserves to be answered in a satisfying way -- maybe even at the expense of pacing. With SOURCE CODE, however, you're talking about an actual plot problem -- one that hurts the movie in hindsight. Sure, maybe the story was moving too quickly for audiences to really consider the issue, but after the fact, it sours the entire experience.

It's also interesting that these first two examples deal with plot problems, while your other solutions deal more with emotional/motivation problems. Apples and oranges, perhaps?

No no no, those two examples are next to each other on the "bad" side of the ledger. I approve of neither.

I'd actually say the "Inception" example was not a plot problem but an empathy problem-- some producer was worried that we'd disapprove of our characters for killing those guys.

SPOILER: One of the big problems with "Source Code" was empathy-based as well: the fact that he flat-out killed that innocent guy by refusing to give his body back, which everybody figured out about two hours after they left the movie theater!

Alright, could you indulge me with a quick Meddler(tm) on the INCEPTION problem? How do you let audiences know that Leo's not killing real people without resorting to an "explainer"?

Followup Q's: Is solving this problem more than a matter of timing one's exposition? Did THE MATRIX do it better?

Basically, this was just a bad note from the producer: if the audience didn't understand this by now, there was no point in stopping an action sequence to explain it.

I think one reason that movie was so exposition-heavy was that too much of the plot didn't flow naturally enough from the premise. "Eternal Sunshine of the Spotless Mind" was just as bizarre of a concept, but it required much less exposition because we instantly recognized the "dream logic" that was involved. "Inception" was also set in the world of dreams, but didn't follow any sort of dream logic that I recognized, so they kept having to explain what was going on.

And yes, the Matrix did it better. We knew the rules pretty well before we went into the new world.