How to Re-Write, Part 4: It’s Hard to Fill a Hole Without Digging a New One

When building a house, it’s not immediately obvious where the load-bearing walls are.  If the client comes in and says, “I want to make this place a little airier, why don’t we take out that wall, that wall, and that wall?”, then the architect has to jump in and say “ the first two walls are no problem, but that third wall is the only thing that supporting the second floor.”

This is what’s so frustrating about getting notes.  Somebody swoops in and says “Oh, it’s too hard to sympathize with the guy if he cheats on his wife, so take that out,” and the writer can only stammer, “But it’s a redemption story!  If he doesn’t cheat on his wife, he has no motivation to do any of the things he does to redeem himself!”  In the case of Phone Booth, as I discussed here, the writer lost that battle, so the movie became simply inane. 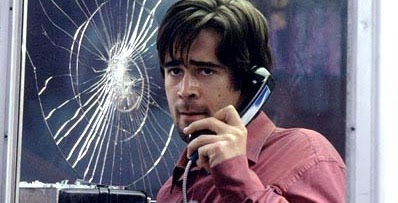 An even more egregious example was Tom Fontana’s ill-fated NBC show “The Philanthropist” The whole concept of the show was that a rich asshole gets evacuated from a resort during a flood, only to realize  that a poor local boy has been left to drown in order to make room for him.  He belatedly goes back and to save the boy, but fails.  As a result, he pledges his life to philanthropy.  Insanely, by the time it made it to air, he did save the boy!  Once again, motivation was sacrificed on the altar of sympathy, robbing the pilot and the entire series of its emotional weight.

If we go back to the “hole” metaphor, then the problem becomes obvious: Everybody knows that it’s hard to fill one hole without digging a new one.  Let’s say you want to give a character more motivation by blowing up his planet, but a later scene is set on that planet’s moon, which is unaffected.  You’ve filled a motivation hole by digging a plot hole.

In Training Day, as I pointed out before, it turns out that Denzel Washington planned long in advance to frame Ethan Hawke for everything.  This gives Hawke a lot of motivation to solve the problem, but it takes away our empathy for the character: instead of bravely choosing to stand up to corruption, he merely reacts to being framed in the way that anybody would.  It’s good to give a character strong motivation, but you can’t take all other their choices away, because choices are the key to empathy.

“Hey Matt, weren’t you just saying yesterday that you have to take every note?”  Yes, you do, but that’s why you have to re-write, not just revise.  If the producer says you’re losing too much sympathy for the hero when a child dies in his place, then you have to agree with that note…then you have to prove to the producer that letting the kid live isn’t the solution.

You have to somehow fill one hole without digging another.  We’ll talk about various types of problem-fixing strategies tomorrow.
Posted by Matt Bird at 6:30 PM

A child is either dead or he isn't, same with sleeping with somebody who isn't your spouse. But some other sins do have a little wiggle room to calibrate the protagonist's redemption need/relatability. I'm thinking in particular of what Walter Garber does in the remake of the TAKING OF PELHAM 1,2,3. In a neat trick, it turns out he's guilty of the bribe that he's under investigation for. And he's made by the villain to admit to this to everyone. Except he does it for entirely relatable reasons: for his kids' college fund and because he had already picked the same subway contractor anyway based on merit, before they offered him the bribe.