How to Create a TV Show, Conclusion: End With A Twist 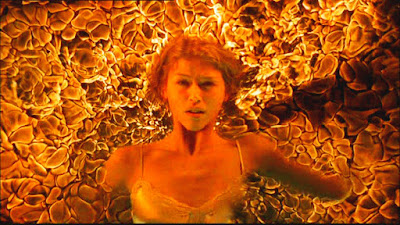 We talked before about the difference between a premise pilot, which launches the basic situation of the show, and a center cut pilot, which begins with the situation already established.

Even a center-cut pilot, however, has some license to add some dramatic twist that makes it more shocking than a typical episode of that show, even if it’s just revealing information that everybody on the show already knows. For instance, one classic pilot ending is to reveal an unexpected connection between the characters, even if this is only a surprise to the audience at home:
Sometimes, the connection would be a shock to some of the characters, but not all of them:
Another type of twist is the shocking character escalation.  If the pilot is about an anti-hero, it will usually end with them doing something that is (presumably) worse than anything they’ve ever done before:
Sometimes life gets worst worse for one character, forcing them to commit to the world of the show:
For some reason, what every pilot writer really wants to do is kill off one of the main characters at the end of the pilot, but the network usually intervenes.  The “Hill Street Blues” and “ER” pilots both end with major characters seemingly dying, but they were all miraculously revived in the OR in the 2nd episode.  The “Lost” pilot was supposed to end with Jack dying (that was originally Jack’s body that Kate was looking up at) before they shot new footage of him surviving.  As I’ve pointed out before, “CSI” was the only show to ever pull this off successfully.

And that’s it!  Oh, and you should also apply all of the 200+ other rules we’ve already covered on this blog.  But then you’re all set: Go create a TV show.
Posted by Matt Bird at 5:13 PM

Do you consider the Buffy pilot to be unsuccessful in its killing off a "main" character in the pilot? I do. Never after that episode is the character, who was supposedly Willow and Xander's best buddy, ever mentioned in any way.

I also find this kind of thing, especially for a pilot like Buffy, which was premiering on a low-profile network like WB was at the time, presumptuous, because they're assuming that their audience will be around with baited breath from day one, when the best they can really hope for is to gain an audience over time, and that audience will be completely unaware of this "shocking twist."

The idea of killing off a character early on is way older than TV. It's a staple of Hawksian tough guy cinema, in which somebody we like (often nowadays played by a star) has to die in the first 10 minutes of the film to impress upon us the danger of the world inhabited by all the others.

I totally forgot about that guy on Buffy, which proves your point. I think it worked in a shocking way to have their friend killed in the pilot, but then it was just silly that he was never mentioned again.

(and j.s. is right, it was done, as it usually is, to establish a sense of high stakes and danger that will hang over the whole series)

This gets at one of the big paradoxes of writing. You want to kill off the less interesting characters, and the audience THINKS that they want the same thing, but they actually want you to kill off some of the most likable characters, because that has a bigger emotional impact.

Thus, as a writer, you're stuck in a situation where you have to waste a lot of likable traits on a character that's just going to be killed off.

In the Buffy pilot, Joss saved all the likable traits for the characters he was going to keep, so the dead guy was kind of a dud, so it had less impact than it could have.

On the other hand, on "Hill Street Blues", "ER", and "Lost" the audience really loved the killed-off characters, but that just made the Network say, "The character who tested the highest in our focus groups was the one you killed off! The only way we're picking up this pilot is if you miraculously revive them in the second episode!"

I'm going to reiterate here that "lazy irony" is not sufficient for a twist.

In that totally forgettable show about the detective with perfect memory who can't remember the day her own sister got kidnapped... it ends with her visiting her mother, who has Alzheimer's and doesn't remember her own daughter. I'm not actually sure what the twist is supposed to be, besides, "whoa, ironic." Except it was "whoa, lazy."

And I'll reiterate that suddenly having a main character involved in a conspiracy (entirely left off screen) is equally lazy. It's baseless, so we don't get why it's relevant. Sure, it implies danger, but it doesn't actually add to the world of the story -- we don't learn anything about the character except that he's not trustworthy. Waaay more interesting to learn a motivation that puts the character into a dilemma, but that's rarely done (perhaps because there's rarely enough time left).

I even found the end of the pilot of Supernatural to be a bit meh because all it seemed to do for me was free the Stanford-going brother from his attachment. It didn't really seem to give him motivation. It felt more like a convenience than a twist.

Well, here I was thinking I finally was writing a pilot that didn't suck and it turns out after reading all the TV posts, it does. BUT it's only the first draft, and now I'm excited to make changes and prune it to a well told story all the way around. And then spend the next year doing that again and again and again on other projects. Thanks for all the help though, seriously one day I'll be able to say I'm finally an okay writer and that will be in a big part thanks to you.