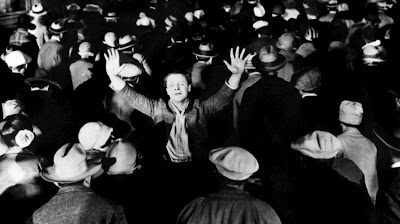 So there’s just not going to be a piece about which movie should have won Best Picture in 1929 today.  After committing to this quixotic project, it’s begun to sink in just how much work it’s going to be, especially if I’m going to go in order.  I’ve done some waffling about 1929’s pick, so it’ll have to appear next week.

Additionally, I’ve only belatedly come to accept that I’ll have to do some actual research for this, and as books have come in, I’ve already got revisions to make on the one piece I’ve done.  To wit: in the slot for “Why It Didn’t Win” last week, I just b.s.’d an answer, but Mason Wiley and Damien Bona’s wonderful book “Inside Oscar” gave me the truth, which is much juicier.  Here’s what I should have said:

Why It Didn’t Win: For the first two years of the Oscars, the award were determined by a committee run by the biggest studios.  You might reasonably fear that this would cause each studio to game the system in favor of their own movies, but in this case the opposite happened.  Though MGM made The Crowd, studio boss Louis B. Mayer despised it from conception through distribution.  When the committee voted to give the movie its “Best Unique or Artistic Picture” Oscar, Mayer harangued them all until 5 a.m., demanding that they choose another studio’s movie instead.  Sunrise, after all, represented the small-town values that Mayer revered, while The Crowd failed to promote “constructive ideas”.  Finally, in order to get some sleep, the committee relented.

Anyone who’s read Lilian Ross’s brilliant book “Picture” will recognize this portrait of Mayer’s rage, even towards his own studio’s product, if it failed to accord with his pollyanna-ish version of how America should be.
Posted by Matt Bird at 10:42 PM