Storyteller's Rulebook #126: Some Scenes are More Ambitious Than Others 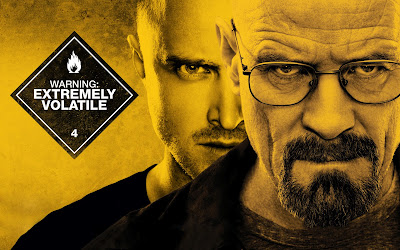 So I’m working on a screenplay and I’m hitting all my beats, but too much of it is falling flat.  I now realize that I need to start evaluating my outlines to determine if the scenes are juicy enough.  Not every scene needs to be juicy, but you can’t just have scene after scene of low-conflict information exchanges, no matter how interesting that information is.

There are three key elements of juiciness in a scene:
Mix and match those and you get the five levels of scenework, ranked from weakest to strongest:

Remember this massive chart we made of every scene in episode 2.04 of “Breaking Bad”, “Down”? 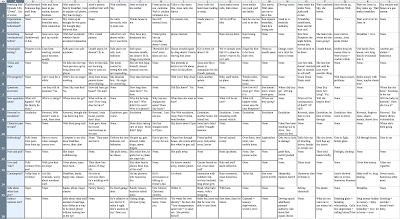 Let’s evaluate the dialogue scenes according to our new scale: 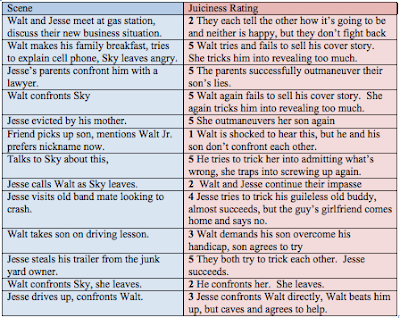 (And let me reiterate here: Cleverness has nothing to do with being smart!  Both Jesse and his mother, I would say, have below-average intelligence, but they still find a way cleverly attack each other’s positions.  These are character who each feel that they are teetering on the edge of an abyss, and they find hidden resources within themselves in order to survive.  The world’s dumbest animal feels the need for self-preservation, and, when threatened, can outsmart the world’s snootiest college professor in order to get what it needs. This is why compelling characters should frequently be on the edge of disaster: because that’s when people are the most resourceful and the most fascinating.)

UPDATE: I later had this exchange about this post in the comments of a totally different post:

A.D. said...
So I'm working on a beat sheet for a comedy, and I cross referenced it with this:
http://cockeyedcaravan.blogspot.com/2012/03/storytellers-rulebook-126-some-scenes.html?m=1

It seems pretty compelling on the page, but it doesn't pass the official cockeyed juice test. What I'm wondering is: am I just fooling myself, or does comedy work a little differently from drama/thrillers?

It seems like watching characters alter their behavior in drastic ways in order to AVOID conflict is one of the pleasures of comedy - but that will often yield a "1." Also, a comedic sequence might involve ten funny "1"s in a row before getting to a conflict-heavy "3" where it all boils over. Am I wrong?

Also - what would the pilot for Breaking Bad look like? Presumably you can't churn out 5s unless you've already built a substantial foundation over many hours of TV. From what I recall, there's not a lot of conversational trickery in that pilot.

In any case, it would be interesting to see more outlines rated on the juice meter, particularly in genres outside of Breaking Bad.
5:56 PM

A.D. said...
After watching Breaking Bad episode 2.04 just now (the one analyzed in your post) I feel I've come to a better understanding of the principles you're describing.

What I wasn't fully grasping until now is that the "tricks and traps" you refer to are ANY form of manipulation, deception, or dishonesty that anyone attempts, including totally passive methods like silent treatment, omission of facts, or pretending not to notice something. It would seem that a lot of this could be added in the longhand scripting phase, even if it's lacking in an outline at first glance. For example, a lazily written one-line scene description could read "X convinces Y of the need to do Z," which is superficially a "3." But thinking through the scene in detail could easily lead to something more like:
-"X guilts Y into doing Z" or:
-"X feigns illness, which leads to Y volunteering to do Z" or:
-"X doesn't actively do anything tricky, but simply withholds information Q, so that Y agrees to join in doing Z" or:
-"X refuses to speak to Y, causing Y to go on a rant, leading to Y suddenly saying something he shouldn't have, in turn leading to X using that information to convince Y to do Z."

...instantly turning a 3 to a 4, or even a 5 in the last case. But every version could have the same lead-in and same outcome. The only absolute pre-requisite is that the characters actually affect each other's thinking and actions throughout the story, which should be a given.

Another thing I realized while watching BB is that having every scene score high isn't necessary as long as juice comes along regularly. A lot of those Breaking Bad scenes are LONG, and the "juicy" parts don't come until late. In a movie, you might have a sequence of three or four scenes in the same time span, and the first few of them could be fairly frictionless setups, and the last one would be the drama that resulted from those setups. So it might be helpful to think of it this way: every long scene or sequence should lead to an exchange with a score of "3" "4" or "5." If not, its inclusion should be questioned.

I know it's not science, but it's interesting to think about! I'm increasingly uninterested in orthodoxies of structure, and more and more interested in the details of execution - the things that make scripts better than "coherent" or "not terrible." Juice (or whatever you want to call it) is a big one.
8:53 PM

Matt Bird said...
Great, I'm glad that you were able to look at the episode and get a clearer sense of what I was getting at. A big part of it is this:

In each of those "Breaking Bad" scenes, both sides wanted something different, and only one was going to get it, which creates instant conflict, even if the conflict is very sublimated and unspoken. In true '1' or '2' scenes, the character exchange information positively or negatively, but their agendas don't really conflict. They both get what they wanted: the exchange of information. Even if that info wasn't what person A wanted to hear from person B, he still easily achieved the objective or hearing it. It's only when B doesn't want to tell A anything that direct confrontation or tricks and traps come into play, and the scene becomes a 3, 4, or 5. A wants B to tell, B refuses to tell, and only one can win.

Writing comedy is tricky because it's easy to generate personality-based conflict that seems fizzy and fun but is unsatisfying, because it isn't based on irreconcilable goals. This fantastic blog post by Ken Levine show how the power of extremely polarized agendas can be very funny even if you take all the "jokes" out (and all of the open conflict as well!):

In the rewritten scene, she doesn't even know that she's thwarting his agenda, but she still backing him into doing something he very much doesn't want to do (sticking with the engagement, at least one more night.) (And let's face it, she does know, consciously or unconsciously)
12:08 AM

A.D. said...
Yeah, luckily I'm no good at writing jokes. My preference is for characters who are serious but end up in challenging, absurd situations. For them, it's a nightmare. For the audience, it's funny.

I just re-reviewed my beat sheet and upgraded many 1s to 3s and 4s. Turns out there's tons of conflict and negotiation that I overlooked... it's just that it's in the form of low-key power shifts, not the kind of obvious conflicty-conflict where everyone's yelling and acting like assholes.

I really think this concept is one of your best. Is there a reason you haven't done more testing? I wonder what you'd find if you looked at the first acts of a couple good movies and a couple bad ones...
2:12 AM

Hey Matt, have you done any other episode analysis / breakdown like this? Not seeing it in the book, or even here on the blog. (Both the "checklist" and "scene work," the 5 Levels of Scene Work, applied to each scene of a particular episode, as you've done both with BB S2E4 "Down?")