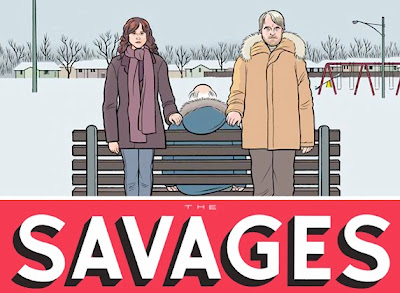 If I had to summarize the message of film school in two words, it would be these: “Never Compromise.” Occasionally, they would bring in indie filmmakers to show their latest films. This was during a period when the audience for indie films was plummeting, and these filmmakers should have been adapting, but instead they were determined to go down with the Titanic.

Time after time, students would stand and say, “Your movie is so uncompromising! How do you resist the pressure to give in to notes?” And the filmmaker would tell them to be strong and always remember: “Never compromise!” As I pointed out before, this is terrible advice.

Here’s a typically painful example. I was a big fan of Slums of Beverly Hills and its director, Tamara Jenkins, so I was excited when she brought her long-awaited follow-up, The Savages. This was a movie about a brother and sister who have to take care of their indigent, unloving dad in his final days. They get more and more annoyed with him, and they they realize more and more that he’s really messed them up, and then finally… they get a call from the nursing home that dad’s dead. End of movie.

As the lights went up, I thought. “Gee, that was almost great, but it had no ending. The kids never confront their dad!” Sure enough, in the Q and A, Jenkins said that most studios and even most indie producers begged her to add a scene where the kids have it out with their dad. Even the production house that actually made the movie told her that they would give her twice the budget if she added such a scene. But no! She stuck to her guns! And let that be a lesson to us! Never compromise! (aka “Never fix your movie”)

Now obviously, the school can’t be blamed for the words of one visiting director, but this was a very typical example of what classes were like as well.

As with any art school, most of the professors were somewhat disappointed about their own artistic careers, but rather than say, “Oh well, maybe I should have been more of a team player,” they took the opposite message. They concluded that: “I was denied by a system that demanded that I compromise. Now that I’m teaching film school, I can create a utopian new generation that will end the era of compromise once and for all!”

Obviously, this is crazy. But why didn’t the school feel any responsibility to teach us the skills we would need to make careers for ourselves? Because of the incentive structure behind these programs, which we’ll get to tomorrow…
Posted by Matt Bird at 6:54 PM

SLUMS vs. SAVAGES here creates a nice teachable moment about the pointlessness of the Amer-Indie ethic of "no compromise." Though in my experience, I just as often saw the exact opposite lesson being taught: that of pointless compromise.

I'd argue a more significant underlying problem with film school is the utter lack of taste (in art or commerce) displayed by most of the faculty.

The best thing about film school is, if you're lucky, you'll probably meet some peers you can learn with and from -- and perhaps work with for real later on.

The only other good thing about it for me was how it demystified the entire process. Making a film is really largely about logistics. Directing is mainly about having a vision and communicating it clearly. The hard part is to write something that's truly worth all the bother of physical production.

(Mind you, this was at a school which shall remain nameless but whose acronym rhymes with "mookla")

In my experience, one of the biggest problems at school (one of your "mimic their voice" schools -which was not my experience there at all... it felt very much in the "quirky indie" model to me) was that people were reluctant to call out bad ideas and bad filmmaking. Everyone was so fragile that some films got made that were doomed from the start because people didn't want to hurt a fellow student's feelings. As if spending tens of thousands of dollars on a film with a shakey foundation wouldn't.

I'm glad I met the people I did, but some of the professors gave really terrible advice, up to and including shooting everything in T.V.-like coverage to be "safe."

As far as storytelling, there wasn't much taught about it. To be fair, I think if I had been more proactive I could have gotten much more out of it, though. I think of film school as a place that might facilitate you in becoming a filmmaker, but not really teach you how to become one, if that makes any sense.

Yeah, my impressions of UCLA and USC are very third-hand, so I should defer to actual graduates.

I certainly remember sitting in school squirming in pain while we were forbidden to tell a student that they were about to spend thousands of dollars on a terrible idea. I'll get to why tomorrow...