Yet another rule complaining about a recent movie! (106, 110) I’ve been a curmudgeonly moviegoer recently!

Young Adult is a very funny movie. Charlize Theron gives a great performance as a failed children’s author slinking back home to pick up where she left off*. Writer Diablo Cody and director Jason Reitman both know how to twist the knife expertly, skewering shallow city-dwellers and banal exurbanites with equal relish.

There’s just one big problem with this movie: if you were to stop the projector a half-hour in and poll the audience about what’s going to happen next, most of them would guess correctly. By a half-hour in, once all the major characters are introduced, this whole movie rolls downhill. It’s painfully obvious what’s going to happen, every step of the way.
That doesn’t mean that there aren’t a few road bumps along the way, but bumps aren’t enough: you need at least one left turn. It doesn’t have to be a huge twist… You don’t need to reveal that everything the audience knows is wrong., but have the characters surprise us. (I think that Cody and Reitman thought there was a twist, in that Theron isn’t really redeemed at the end, but these days in independent movies that’s started to become the rule, not the exception. It’s not a daring choice anymore.) 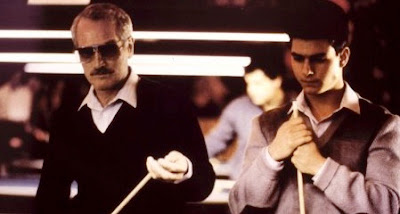 Compare this to, for instance, The Color of Money. If you turned off the projector halfway through, most of the audience would guess that Tom Cruise was going to eventually reject the corrupt ways of Paul Newman and find a way to succeed without compromising his integrity. Instead it’s Newman, not Cruise, who discovers his conscience. When this plot turn happens, we’re shocked, but not baffled. In retrospect, the signs were there, but we didn’t notice them before.
The ending of Young Adult, certainly seemed inevitable, but not at all surprising. I think that Cody wanted to condemn her own main character, and so she didn’t allow the character to surprise her, or surprise us. If you set out to “nail” your main character, then you’ll probably have to use a hammer, and they’re going to end up flattened.
* Despite being totally miscast: We’re supposed to believe that this woman dejectedly eats fried chicken and Ben and Jerry’s?? Look at her!
Posted by Matt Bird at 6:57 PM

I haven't seen this yet but read the script and have mixed feelings about the story. I thought it was interesting but not all that edgy. I'm curious to know what you'd do to "fix", if you will, or throw in a left turn to this story to make it more compelling and something that would stay with you?

Nah, I got nothing.

Someone figured up how much the 4 women in "Sex and the City" would weigh if they actually ate all the food they were shown consuming on screen. They would look nothing like Carrie, Samantha, Miranda, and Charlotte.

I didn't watch it... and I'm a bit late to be commenting, but reading the plot synopsis, I think it would have been more interesting if the miscarriage had actually been an abortion that Buddy forced on Mavis. Mavis then wouldn't just be selfish or delusional, she'd be a truly scorned woman looking in on everything that should have been hers, asking "Why not me?" And the answer might be something that changes her self perception in a positive way and inspires her to get back to writing "You deserved/were cut out for something more than that," essentially, although it doesn't have to be Buddy who says it, although if he does say it in front of his wife it might feel ever so slightly like a victory for Mavis, enough for her to regain some self respect. It would also make her character make more sense, the trauma of the abortion and her inability to truly understand why it had to happen being what was keeping her locked in this status state.