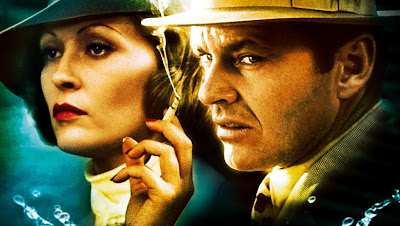 An interesting example of this is in Chinatown. In the first scene, detective Jake Gittes has just shown a working class client named Curly pictures of his wife having an affair, then told Curly he should probably forget about it. In the finished movie, we cut away from the scene to the office outside, where the secretary waits, then Gittes and Curly emerge with Curly explaining that he can’t pay right away. Gittes says he understands, but he was just trying to make a point.

Huh? What point? Did we miss something? Yes we did. The missing chunk of dialogue from Robert Towne’s original screenplay reveals all: 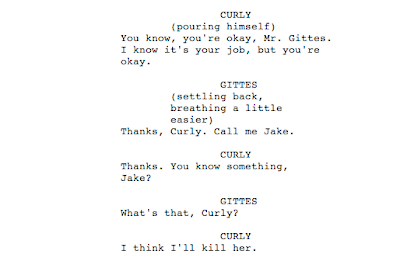 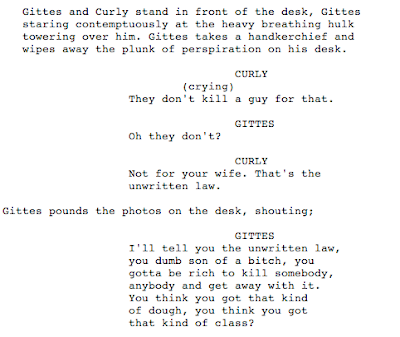 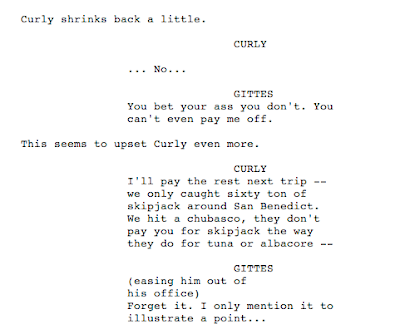 If they had caught this problem in the script phase, they could have re-written it so that Gittes offers an incorrect statement of philosophy instead, but they didn’t, so they just chopped out the middle of the scene in the editing room. As you’ll see in tomorrow’s First 15 Minutes round-up of the movie, Gittes doesn’t get a false statement of philosophy until much later in the movie.
Posted by Matt Bird at 4:57 PM

Yeah, just when you think you've heard every screenwriting teacher say everything there is to say about a classic like CHINATOWN, Matt finds something new for us!

Interesting that Syd Field points this sequence out as a strength of the CHINATOWN screenplay. I'm much more inclined to agree with you, as I am in general.

I've been reading through the basic canon of books on screenwriting, and I have to say I've gotten more out of your blog than any of them. I think I've read back through every single one of your previous posts. Just wanted to put my two cents in, since I've never commented. Thanks.