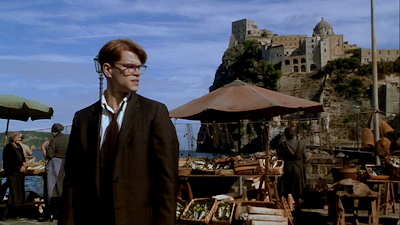 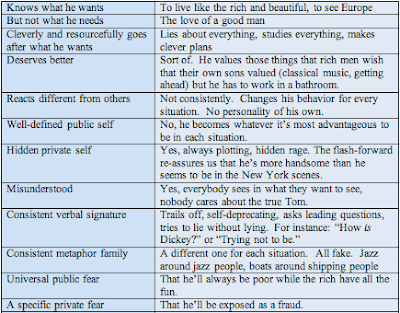 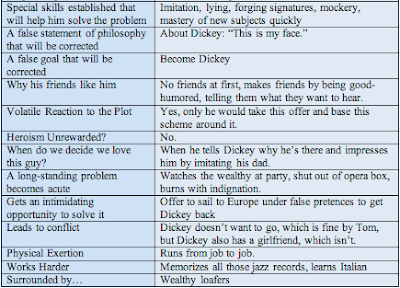 If Boyle in Salvador is the asshole-truth teller, then Ripley is the flip side: the sociopathic liar. Each character type has its appeal. There’s something very thrilling about watching a character juggle lies: Every other character is fooled but we in the audience see all and know all, making us the liar’s intimate co-conspirator. We can’t help but admire the liar’s dexterity, and we develop a gleeful anticipation every time it he has to wriggle out of another trap.
And yet, the audacious moment we admire most is when he dares to unexpectedly tell the truth: He suddenly admits to Tom the real reason that he’s there. They now feel the same intimacy we do: a liar has chosen to trust them, which is deeply flattering, at first...
Posted by Matt Bird at 6:48 PM

Did you know there’s a 12 word sentence you can say to your man... that will trigger intense feelings of love and instinctual attraction for you deep within his chest?

Because hidden in these 12 words is a “secret signal” that fuels a man’s instinct to love, please and protect you with all his heart...

This instinct is so hardwired into a man’s genetics that it will drive him to work harder than ever before to make your relationship the best part of both of your lives.

In fact, triggering this powerful instinct is so important to having the best possible relationship with your man that once you send your man one of these “Secret Signals”...

...You’ll immediately notice him open his mind and heart to you in a way he’s never experienced before and he’ll see you as the only woman in the world who has ever truly understood him.

And the powerful “secret signal” found in those 12 words is just one of many that veteran dating coach and relationship expert, James Bauer, has discovered throughout his career.

Thousands of women are already using these “secret signals” to transform their failing relationships into the passionate romances they’ve always dreamed of.

And countless other women are using them to hook great guys from the very first time they meet.

...And what keeps his love and attention transfixed on you and only you.

This presentation reveals these relationship secrets and much, much more... and it’s a real game changer for any woman who knows she deserves better.

If now is a good time, you’ll want to watch this life changing presentation while it’s still up.