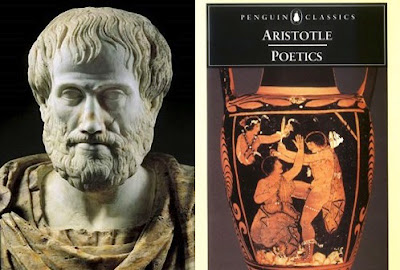 The Guru: Aristotle
The Book: Poetics
The Year: 335 BCE, or thereabouts
The History: Aristotle (student of Plato, tutor of Alexander the Great) lectured on every subject under the sun, including the proper form and function of tragic plays. (There was possibly a companion volume on comedy, but that’s lost today.)

Outrageous Statement that Makes You Want to Reject the Book Outright: “The character will be good if the purpose is good. This rule is relative to each class. Even a woman may be good, and also a slave; though the woman may be said to be an inferior being, and the slave quite worthless.” Okee-Dokee then.

Areas Where It’s Less Than Helpful: I was assigned to read this on the first day of film school, but it didn’t do me much good. Students are hardwired to reject restrictions, so they pick up structure books looking for an excuse to fling them across the room, and Aristotle has no shortage of those:

Useful Wisdom: That said, re-reading it for this entry, I was shocked at how many of the book’s truths I had rejected only to “discover” them for myself much later. These include:

Tomorrow, we’ll jump all the way to the 20th century. Sorry, slavery-lovers.
Posted by Matt Bird at 9:07 PM

Talk about starting at the top! And here I thought you were going to lead with Syd Field.

Is it possible he doesn't like a happy ending because he's talking about Tragedy?

Yeah, but he specifically describes why happy endings are inherently unacceptable and unsatisfying.

Buried within two of those bits of questionable advice are some helpful nuggets of goodness.

I'd say the hero being royalty relates both to the "why him/why her/why should we care" question and to the overall stakes of the story -- concerns that drive development and audience interest to this day. Aristotle probably simply couldn't imagine how a story-worthy event -- with adequate stakes and a relatable hero -- could happen to an everyday person.

Then there's the classical unities of time, place and action -- the story about one problem that unfolds in one location in one day. This often gets knocked as old-hat irrelevance at worst, stage-bound drama at best. But, um, contained thrillers anyone? Not to mention geniuses like Tarkovsky who came around to this idea too (STALKER, THE SACRIFICE). Sure, it isn't a hard and fast rule, but it is a powerful tool for ratcheting up tension and it speaks to the never-ending desire of story development folks for some kind of "ticking clock" (to bind time to action) even if the story takes place in different locations and over days or weeks.

I think the "royal blood" rule was a garbled version of three rules that are actually good:

1. I've said before that the hero needs to have decision-making authority. In Aristotle's time, only the royals had that.

2. It's not like he wanted to exalt their royal status. He felt like heroes had to topple mightily and therefore you should start with an aristocrat, simply because they'd have the furthest to fall.

When you put it that way it makes me sad that Aristotle never got to see BREAKING BAD.

The Poetics is descriptive rather than prescriptive. Aristotle examines the successful dramas of his day to see what they have in common.

It is not Aristotle's fault if all the protagonists are royal.

Also, the dramatists worked only with stories already known to the audience. When Tiresias tells Oedipus "You, you yourself, are the killer whom you seek," the audience already knows that, but they are purged of pity and fear by seeing the story acted out.

Hmm, I gotta disagree, unless our modern translations are changing his tone. He's very didactic: “It should have for its subject a single action” etc. He's saying how he thinks things should be, not how they are. In fact, he frequently complains about all the plays he's seen that disobey his ideal rules.