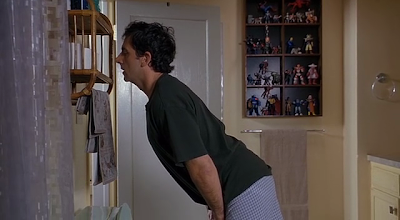 It’s no surprise, since I derived a lot of my criteria for what makes a good movie from Silence of the Lambs, that Clarice Starling was pretty much the ultimate example of my definition of a good hero. But now let’s try some other genres and some other heroes who are less sterling than Starling. Today, we’ll tackle…

Andy in The 40 Year Old Virgin 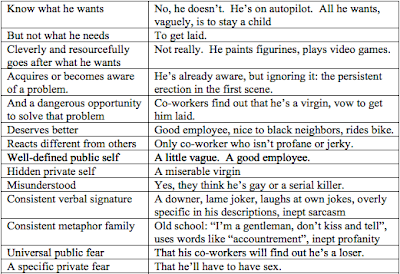 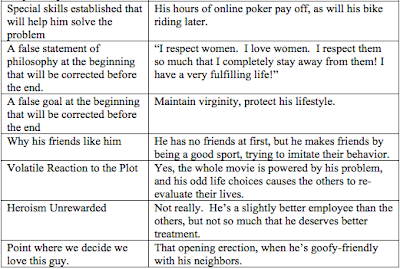 This guy doesn’t do everything I say a hero should do (he doesn’t want anything much at the beginning of the movie, for instance) but he’s still very sympathetic. Meanwhile, are you starting to see some bizarre trends emerging? I sure am. Let’s rack up some more data tomorrow…
Posted by Matt Bird at 10:12 PM

One of the things I like so much about this film is it takes the romcom cliche of an uptight guy and literalizes it to the extreme. Unlike Cary Grant in BRINGING UP BABY Andy doesn't just need some manic pixie dream girl to loosen him up. He needs to get laid, period.

There's an ingenious simplicity to it. A story that wouldn't be at all interesting if he's a teenager (and of course in those movies, the heroes are always actively trying to get laid), becomes fascinating because he's middle aged -- a demographic that's usually supposed to be box office poison.

As for bizarre trends, I suppose that Hollywood shorthand for white protagonist likeability is having black friends.

What quality secrets of story! It's superb. It's hilarious. My great pleasure I am on this brilliant article. I think Andy's 40 years experience and his story indicates a meaningful life event. Huge thanks for arranging such an exceptional story. I like it. 바둑이사이트

Thank you for sharing such a nice article. I love it.office furniture Miami