What's the Matter With Hollywood, Part 11: Movies Apologize For Themselves 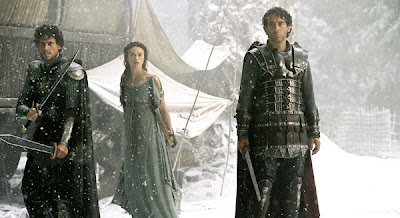 Too many movies these days apologize for what they are. I think this has something to do with the New Yorker Caption Contest Paradox: development people are tired of hearing straightforward pitches that actually try to capture the appeal of the property. As soon as they hear about a “edgy new take” on a property they own, they wake up from their stupor. Finally! This isn’t your father’s [franchise name]! This one’s hip!

There’s just one problem. Moviegoers aren’t hip. We’re square. When we order a steak, we don’t want to find that it’s been stuffed with wasabi sauce. We just want a steak. Ironically, this is one area where developers disagree with their own marketing people, and marketing, for once, is firmly on the side of the audience.
Disney recently made the wise decision to cancel their upcoming big-budget relaunch of The Lone Ranger, and I’m sure that the marketing department helped to put a stop to it. The last thing they wanted to have to say was: “Listen up, America, it’s the Lone Ranger! He’s a cowboy who’s been framed for a crime so he wears a mask! But it’s not really about him, it’s about his Indian sidekick Tonto! But don’t worry, Tonto is played by a white guy! Oh, and did we mention that they’re fighting werewolves?? Awesome!”

It’s hard enough to remind people who the Lone Ranger was. It doesn’t actually help to say “It’s the Lone Ranger, but…” A “but” never helps any marketing message.

There was a revealing quote from Jerry Bruckheimer about his 2004 version of King Arthur. He said that they had developed the movie on the assumption that audiences could only show up if they had a new twist on the old story (This time it’s grim, grimy and pseudo-celtic!) To his surprise, in the test screenings, the feedback he got was that people were disappointed it wasn’t a straight up Camelot movie. He had a flop on his hands. 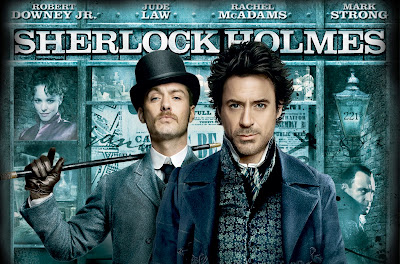 The recent reboot of Sherlock Holmes was originally pitched as an “edgy twist” version, but once it came out, they found that it seemed to be popular despite the edgy stuff, not because of it. Audiences responded positively to the classic characters and tolerated the supernatural/steampunk elements. The studio told them that they could have a sequel if it was more down to earth and stuck to the original stories more. It turns out that people go to a Sherlock Holmes movie because they want to embrace the concept, not reject it. 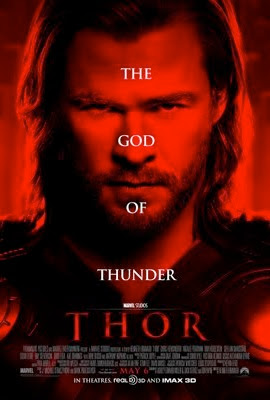 I knew Thor would be a hit when I saw this poster. If you’re making a Thor movie the concept is four words long: “The God of Thunder.” Either people say “Hell yeah!” or they don’t. In this case, the movie itself actually did have a twist on the concept (nudging it from mythology into science fiction), but they were smart enough not to promote it that way.
Posted by Matt Bird at 11:08 PM

Sometime just recasting a classic story with fresh actors is enough of a twist!

Another great post. I penned a script about Joan of Arc years back with the intention of making it as authentic as possible (meaning, as close to the real story as I could). The script got me some attention, to be sure, but the criticism it received always baffled me.

"What," I was asked, "is unique about your story?" I didn't (and still don't) have an answer. Truth is, I don't want to see a Joan of Arc movie where Joan of Arc escapes or lives in space. The basic story itself is both timeless and popular, as well as TRUE.

Is Spielberg, for instance, supposed to have a fresh "take" on Lincoln for his upcoming epic? I don't see how he could. Nor could I see how he'd want to. What about Cameron's "Titanic?" Was the ship not supposed to sink?

sean1: riffing on both your example, and on the King Arthur movie that Matt referenced: First Knight.

Don't know if anyone saw this dog, but it was an Arthurian film wherein, at the end, Arthur dies and gives Lancelot and Guinevere his blessing and they live happily ever after, presumably as king and queen of Camelot.

The Arthurian mythology is quite flexible and you can rework a lot of the details with impunity. It's also a sprawling epic that allows writers to pick and choose which parts of the story they want to tell. You can end your story at a high point in Camelot's arc, and that can add an implied tragic counterpoint to your story.

But you CANNOT preclude the fall of Camelot in your story. You cannot give the overall mythology a happy ending. People know how this story ends! That's what a mythology is! It was a real WTF? moment. Feel free to "make it fresh," but leave the touchstones intact!

This is also what happened to Ridley Scott's ROBIN HOOD, which started development as an ironic inversion of the traditional myth in a spec script called NOTTINGHAM where the conventionally bad sheriff was a law-and-order hero fighting an insurgent named Robin Hood. Even though the original writers got a story by credit on the finished film, almost none of their works seems to have survived. Explaining the near total rewrite in interviews, Scott and his star Russell Crowe ridiculed the idea that audiences would pay to see a Robin Hood story in which Robin was the actual bad guy.

For what it's worth, the idea of Nottingham, while indeed "a fresh take" and "a twist," strikes me as a big heaping pile of Who Gives A Crap. The heart of the Robin Hood myth, the reason for its enduring popularity, is that it's about the principled resistance to unjust authority. Strip that out, and you're left with what? "Arrow-shootin' dork?"

Getting bored with the big stories and big classics is not a problem for people who aren't swimming in fiction all day every day. As long as the versions are spaced enough years apart, they can still draw.

Maybe it's like the appeal of SFX. If you do a straight take of a well-known story, you have to nail it. If you have a great concept, it can succeed even without quite working. Just like a mediocre script and bad acting plus $150 mil in CGI can bring in reliable (and huge) money. Making movies with an eye towards quality and hoping that quality is enough is a giant crapshoot. Better to stand out from the crowd for whatever reason ("It's Sherlock Holmes...in SPAAAACE!") and turn it into a lavish spectacle, because those are more reliable box-office generating tools.

Also, how can one imagine the pitch for Nottingham and not break out in snickers? "It's CSI in medieval England! And the guy they're hunting? Robin Hood! And the hero is the Sheriff of Nottingham!"

Yeah, that's great. Next, we can retell the myth of King Arthur, but we'll do it in the style of "Two and a Half Men" and the hero will be Modred! Genius!

The thing is that mythologies, large or small, lend themselves to reinvention and reinterpretation. They're incredibly plastic, but you must still follow a few iron clad rules.

You must leave enough essential touchstones intact for the story to be recognized. And your reinvented elements must be changed for a reason -- the changes must illuminate the mythos, either highlighting elements not recognized in earlier versions, or adding (to borrow one of our host's themes of late) ironic counterpoint to the traditional version.

Robin Hood has survived as a mythology for the same reason that most mythologies do: it can be interpreted in multiple ways by multiple elements of society. Most of us think of Robin Hood as a populist hero, stealing from the rich and giving to the poor. But it is simultaneously the story of a loyalist (and for that matter, royalist) resisting and undermining an illegitimate administration. The Nottingham concept you mentioned manages to chuck both of these concepts into the trash, leaving us with no reason for anyone to give a damn.

Radical reinterpretations can work very well. Look at Mists of Avalon, the Stephen Moffat Sherlock and Wicked. The former and latter work in counterpoint to the original mythos, but they're able to do so by keeping enough of the touchstones of the story in place that you can recognize each unexpected plot turn and newly imagined character as a commentary on the the familiar story. As for Sherlock, they keep the characters absolutely unchanged, merely transporting them into the modern era, highlighting the timelessness of the characters and the mysteries freeing them from the ghost Basil Rathbone.