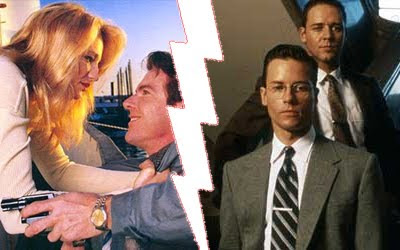 Is this realistic? No, it isn’t, but it is good storytelling. As I discussed before, relationships onscreen don’t always have to resemble realistic interpersonal drama. They can also reflect our own inter-cranial drama: The debates that go on inside our heads, where we pit extreme points of view against each other. This is why characters tend to be more polarized onscreen than they are in real life. It won’t ring true to our social experience, but it will ring true to our internal thought process.

This is an easy rule to implement if you’re writing about people with different backgrounds. The Big Easy is about a cop who gets recruited by a D.A. to take down police corruption. It’s not hard to figure out that the cop should be street-smart and morally loose, while the lawyer will be by-the-book and priggish. Their different professions make their personalities easy to polarize.

L.A. Confidential has a similar story, but this time both protagonists are cops. It doesn’t matter: you get the same dichotomy. One cop is street-smart and morally loose, the other is by-the-book and priggish, despite the fact that he’s a cop. Even if they have the same public identity, you don’t have a story unless you can polarize their personalities.

American Beauty is about an unemployed middle-aged guy married to a real estate saleswoman. Not surprisingly, she is slick and manipulative while he’s earnest and frustrated. But Glengarry Glen Ross is entirely about real estate salesmen. They can’t all be slick and manipulative or there’s no story: we have to contrast them with the one salesman who is (or seems) earnest and frustrated.
But polarized protagonists present another challenge, which we’ll get to tomorrow…
Posted by Matt Bird at 5:55 PM

Hello! I've been following (unofficially) your blog for awhile, and I love it! So I gave you an award for it! Stop by my blog to learn more about it :)


After reading your article I was amazed. I know that you explain it very well