Storyteller’s Rulebook #92: You Can't Always Want What You Get 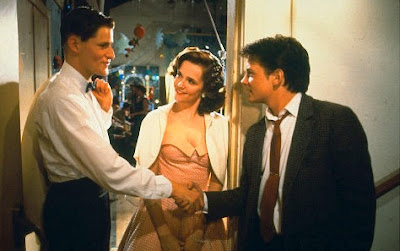 At the beginning of your story, the hero must want something, but that doesn’t mean that the hero must want the opportunity that actually comes their way. Not every story needs to be about making their dreams come true. Instead, they could get exactly what they don’t want. Or they could end up on a more circuitous journey that has an ironic relationship to their original goal.

Of course, as I’ve said before, this doesn’t mean that they could just want nothing at the beginning of the story. They need to have something else that they wanted to do instead. Audiences hate heroes who are sitting around waiting for a story to happen to them. Choosing something over nothing isn’t an interesting choice. Being forced to help rob a bank doesn’t sound so bad if the alternative is of loafing on the couch. Being forced to help rob a bank instead of picking up your daughter from the airport, on the other hand, is a painful dilemma.

So every hero starts out wanting something, but the relationship between what your heroes want and the actual opportunities they discover can play out in many different ways:

Luke does want something; but contrary to your recommendation, he *is* sitting around waiting for a story to happen to him. He's taking no action to get closer to his goal other than complaining to Uncle Owen and staring soulfully into the sunset. Might "Star Wars" have been improved if Luke was already taking steps to get off Tatooine behind Uncle Owen and Aunt Beru's backs? Even though it seems like this would be a good idea -- hey, he's an active protagonist showing initiative! -- it probably would've made the beginning too busy, and decreased the emotional valence of the opportunity that does come his way in the form of Ben Kenobi. Maybe there's a certain point at which one has to lay off what screenwriter dogma recommends and let the logic of the reality of their situation determine their actions. Otherwise the story might feel airless and overdetermined. Thoughts?

I gotta disagree, James-- Luke isn't just sitting around. He's working full time on the farm, a difficult job he resents but still wants to succeed at out of a genuine desire to help his aunt and uncle, and in the meantime he's constantly trying to find a way to conclude his duties and get to the academy. When he sees Leia's hologram, he doesn't just say, "Finally! I was so bored! Let's get outta here!"-- Instead, he's faced with a difficult decision-- he has good reasons to stay as well as reasons to go. "Active protagonist" doesn't have to mean "hustler playing all the angles". It can just mean "guy doing one job well while asking for a different job", like Luke.

I think "guy doing one job well while asking for a different job" sums it up nicely. Well-explained.

Not to mention honing his womp-rat shooting skills.

Side note from yesterday -- I found it! The movie I was trying to identify is called "Lost Angel," it was made in 1943, and it DID star Margaret O'Brien (as my vague recollection of it claimed). Keenan Wynn was in it, too. As I recall, it was a real charmer.

Here's the beginning of the synopsis from Wikipedia:

"The professors of the Institute of Child Psychology raise a foundling baby, whom they name "Alpha", as an experiment to see if a scientific upbringing can create a genius. By the time she is six years old, Alpha can speak Chinese, play chess and the harp, and has studied algebra and the campaigns of Napoleon, among other things.

Newspaper reporter Mike Regan is assigned, over his protests, to write an article about her. He manages to secure an interview, despite the reluctance of the professors, and discovers that Alpha, while raised with loving care, has missed out on the joys of childhood. Disturbed by Mike's claim that magic is real, Alpha decides to investigate further and sneaks out to see Mike, leaving the confines of the institute for the first time in her life..."

Fascinating premise, Unknown. Sounds like M. T. Anderson's recent book "The Astonishing Life of Octavian Nothing" done as a comedy. Or Alan Moore's "Tom Strong". And I always did like Margaret O'Brien.

I realise this is 2 years too late to be of any importance, but Luke Skywalker wanted to join the Imperial Academy to become a pilot as he wouldn't have even known about the Rebel Alliance's existence.
Interesting though as it adds a lot of irony to his story when you think about it!

There are lots of movies out there in the website which can't be found in any place else. read here for more details.

I went over this website and I believe you have a lot of wonderful information, saved to my bookmarks