The Big Idea, Part 4: Are There Too Few Good Ideas or Too Many? 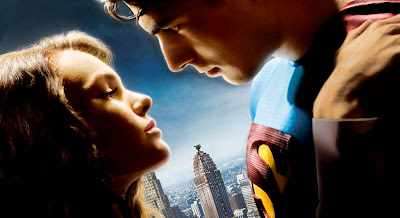 When I got signed, my new manager asked me for a list of projects I was interested in working on. I excitedly made a list of my brilliant “takes” on all of the biggest stalled adaptations in Hollywood. How I would “fix” Superman, Conan, Flash Gordon, etc... Immediately, my new manager started to cool his interest in me. There was a palpable sense that “Uh oh, this guy just doesn’t know how the business works.” And he was right.

I had chosen this profession based on an entirely erroneous assumption. I thought Hollywood was out of good new ideas. Why else would they make so many bad movies? They just needed someone brilliant to waltz in the door and tell them, “Hey guys, this isn’t so hard! Let Dr. Matt diagnose all your problems!”

What I didn’t realize was that the problem wasn’t too few good ideas, but too many. Look at an unmitigated disaster like Superman Returns, in which the once-beloved hero was turned into a deadbeat dad stalking his sullen baby mama. Was that the best they could come up with? Of course not. The problem wasn’t that nobody knew how to fix Superman, but that everybody did. Every screenwriter has a Superman pitch (or even a script) in their drawer and at least a dozen per year actually got to pitch theirs to besieged Warner Brothers executives.

This can result in a horrible situation I call “The New Yorker Caption Contest Paradox”. Every week for the last five years, the New Yorker has run a caption-less cartoon and asked their very clever readers to supply the proper punch line. The next week, they run their picks for the three best lines, and usually all three are terrible. 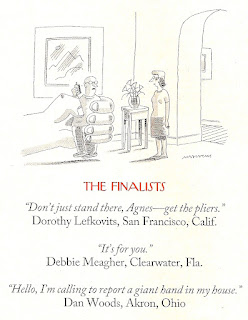 Just look at this egregious example.  All three of these choices are blatantly incompetent.  Any caption to this cartoon must address three things: he is being held by a giant hand, he is on the phone, and he is talking to his wife.  Each of these captions addresses only two.

Is this because they got no good submissions? I think there’s another explanation… I think the problem is that there really is one ideal line for each drawing (In this case, probably something along the lines of “They say they can’t do anything about it until Monday”), but they get so many slightly different variations of that one good line, that they all become a blur. The only ones that stand out are the oddball entries, so they just pick three of those.

I think the same thing happened with Superman Returns. They had bought dozens of very good Superman scripts over the years, but none had gotten made and now they’d gotten bored with the details that formed the heart of the story. At some point the scripts that started getting traction were oddities that seemed “fresh” and “new” by comparison.

Too many screenwriters, with too many good ideas, are canceling each other out. The producers and studio chiefs, confused by all the cacophony, are making bad decisions. In the end, who gets which job is essentially random. The amazing thing is not that they made such a wrong pick for Superman. It’s that somehow, even amidst all the confusion, they made a right pick for Batman. 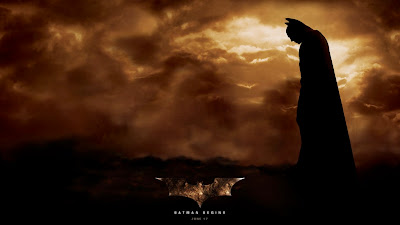 Now I get it: If you’re an unproven screenwriter, you can’t immediately seek out the projects that you’re passionate about, because that means you’re competing against everybody else in town and you’re only adding to the problem. Instead, find a way to write passionately about whatever small assignment randomly comes your way, even if it’s something you’ve never heard of. Don’t stand there like Casey at the bat demanding a slow pitch up the middle. Be the guy who can hit any curveball out of the park. If you keep doing that, you’ll stay in the rotation for years, and someday the perfect opportunity will finally come your way.

All right, now that we’ve explored the nature of ideas, next week we’ll try to figure out the difference between a good one and a bad one…
Posted by Matt Bird at 12:08 AM

Strikeouts are boring. Besides, they're facist. Throw some ground balls, dammit -- they're democratic. (This was slightly more apt when I thought it was "Home runs are facist" -- wrong, but a lot of other folks on Google think so, too.)

Maybe just "be the guy who can explain the infield fly rule".

To leap on the metaphor pile-up: How about the guy who's not even playing baseball at all? If there are too many players in your field, change the game.

By which I suppose I mean that this particular post is more about "takes" or "ideas about other ideas and existing properties" than about original ideas (with all duly noted the caveats about how nothing ever is, etc.)

As you say, why try to pitch yet another take on SUPERMAN to the already confused executives when (still perhaps in the same ballpark to mix metaphors again) you can make up a new spin on the superhero myth like THE INCREDIBLES, KICK-ASS or UNBREAKABLE.

True enough, J. S. but to a certain extent this phenomenon affects original spec scripts as well. I'm convinced that that the New Yorker Caption Contest Paradox (NYCCP) is partly to blame for the fact that so many terrible specs get bought:

Once the script readers read too many variations on "boy meets girl" or "earnest cop catches crook" then every script starts to seem like sentimental mush. That's why so many scripts about assassins get bought, even though the public has shown no interest in that topic:

Those scripts have an "edge" that's very refreshing after reading so much mushy stuff. Of course the actual public, going to a movie on Friday after a hard week at the office, *wants* mushy stuff, not hitmen, but they're out of luck.

I think I understand a little more of what you're getting at. The weirdest ideas tend to stick out. Not the most original or innovative, but the oddest. Hence the many terrible genre pictures and mash-ups in development that have nothing to say about their respective genres and no real story to tell. I'm thinking of the Jane Austin + Zombies projects (isn't there more than one?) or ABRAHAM LINCOLN: VAMPIRE HUNTER.

Though I don't think the public necessarily wants the same old, same old. Even your example of WHEN HARRY MET SALLY is a little off, both because it's a superior "boy meets girl" story and one of the more interesting and innovative mainstream romcoms of its time.

As an audience member, the premise of a thing still matters to me and I definitely don't want meat-and-potatoes stories from the movies. Isn't that what network TV and ghost-written best-sellers are for?

When I was a little kid, I used to choose every book or movie based on what it was about -- the blurbs, the synopsis, the poster, the what-is-it. Then I grew up and got more sophisticated. I shifted into reading/seeing things because of what I'd heard or read about them, because of who wrote or directed them, etc.

Nowadays I find that I've come full circle, like everyone else with so little time ("we've all got the same two hours") that the idea of the thing really matters again. It may well be the decisive factor. If I'm only going to see one film by a director, for instance, it's not only about which one is supposed to be the best, but the one with the most interesting premise.

So I look forward to your next posts on good vs. bad ideas. I'm hoping you'll get into what makes a take or a premise truly new as opposed to merely a superficial novelty (like those mash-ups I mentioned above). For me, it has something to do with the fit, the organic connection between the premise, the genre and the characters as well as the deeper agenda of the story itself.

No no-- I was saying that I love "When Harry Met Sally" and "Witness", because they're standard plots done exceptionally well. I agree with the public in wanting more of those movies, but they're very hard sells these days. It's embarrassing to admit the you've greenlit a "low concept" but well-executed movie. It's much less embarrassing to brag that you've made something "daring" like "Sucker Punch", no matter how terrible the actual movie is.

In my mind, "It's for you" does address all three.
The fact that he doesn't mention the hand is what makes the joke. It's still relevant even if not spoken out loud.

It won't demand you to register so as to watch movies on line free of cost to watch Animation Movies online.