The Big Idea, Part 1: Are Ideas Cheap or Valuable? 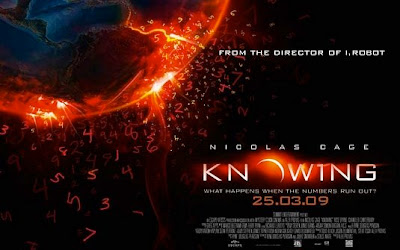 It’s considered the ultimate mark of the amateur screenwriter: “I just had a million dollar idea, but I won’t tell anybody so that no one steals it.” They cover their scripts in copyright icons and WGA registration numbers. Worst of all, they actually read the fine print of submission agreements and raise hell about the ludicrously broad language found there.

Seasoned screenwriters always chuckle about the folly of this: “Ideas are a dime a dozen. Great screenplays are merely skillful new executions of old ideas. If you do have a ‘brand new idea’, then oh brother are you in trouble, because every studio in town probably already has a similar project in development. Want to do a dark reinterpretation of the Wizard of Oz? Join the club.”

That’s the conventional wisdom, anyway. But someone forgot to tell the studios or the trade magazines. Every week, the new script deals are announced with much fanfare, and never once has anyone announced that their new movie is “a standard story with exceptionally rich characters!” No, script purchases are always accompanied by a one-line description of the brilliant brand-new-idea that the studio has purchased. And it often seems the studio bought the idea and only the idea, because an old pro is quickly hired to re-write the actual script.

So which is it? Are ideas cheap or valuable? The answer is tricky: Everybody knows that ideas are ephemeral and the only marketable skill is good writing, but you can’t boast to the trades about your opinion that the script you just bought was well written. You can only boast about the fact that it has a unique concept. So that’s what they do.

Like most screenwriters, I read the new loglines in the trades every month. For each one, I either say, “I wish I’d thought of that!” or “That’s idiotic!” (My all-time favorite: “The story of a serial killer who only kills people in the middle of tornadoes!”) But eventually, I noticed something… None of these movies ever actually seemed to get made, even if the idea was fantastic.

To understand why, I need look no further than the one exception that proved the rule... It was, hands down, the best idea I ever read about in the trades:
How can you hear that idea and not picture the trailer? A camera pans across the four crayon drawings and then lands on the last one (maybe a nuclear bomb hitting DC)-- everyone in the theater would instantly get it and say “I gotta see that!” 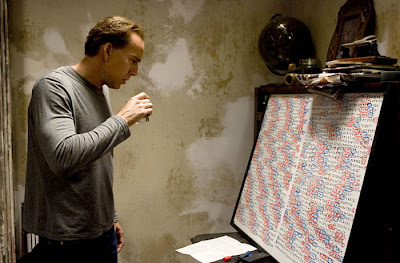 For years, I wondered what ever happened to that great idea… Finally, just when I’d forgotten all about it, the actual movie finally came out. The kindergarten teacher had been replaced by Nicolas Cage as an alcoholic mathematician. The drawings had become pages and pages of numbers (Numbers are more cinematic than drawings??) The disaster had become unpreventable (the sun going supernova), so the premonitions were for naught anyway. The convoluted explanation involved angels and aliens. The title had changed form Time Capsule to Knowing. It was a big flop.

For once, Hollywood had actually bought a once-in-a-lifetime, nobody-could-mess-this-up idea… and messed it up. And yet, the fetishization of ideas continues unabated. Why?? Let’s pick up there tomorrow…
Posted by Matt Bird at 8:02 PM

Fascinating story about the history of "Knowing." What a shame. It's like the studios feel they HAVE to meddle with a given script, no matter how good it (or even its concept) may be.

Hey, I've been consistently mind-blown by your blog, and have recommended it on my site.

Technically, the Ripest Pick is an award, so if you'd like to post it or bestow it upon someone else, that'd be awesome.

However, I haven't seen you post awards or talk about networking on blogger, so I don't expect it. The compliment is still yours to keep.

Thanks for the excellent articles!

And who's the poor soul who wrote the original Time Capsule? Surely we could all send notes of admiration/condolance?

Christine-- Thanks, that's awesome! I followed your name back to your own blog a while ago and I'm a fan-- I loved your entry on "why I'm not reading your blog". I'll figure out a way to acknowledge and/or pass on the karma when I'm home from work tonight.

And Rams-- I don't remember where I read the original sale announcement all those years ago. IMDb gives Ryne Douglas Pearson a "story by" credit for "Knowing", but those don't always line up the way they should.

This is a very interesting observation, but it leaves me with a big question: Why do people when describing this great movie or tv show they just saw always talk about the story and not the character?

I think the answer to this might be that people think of movies/tv in terms of genre. If you ask someone about "It's a Wonderful Life", they might say it is a great "Christmas" movie. If you were to ask about "Star Wars" they would say it was great Science Fiction.

Combining this question with your recent post about objects and how the writer can use objects to replace dialogue, I think there is something about people and their reluctance to using words to describe the characters that they find prohibitively difficult. And the only thing I can think of that people universally do not like to talk about are their emotions. Hence, people and studios alike will choose to discuss the idea (non-emotional) and avoid discussing characters (emotional/too-self-revealing).

There are lots of videos downloading application readily available on the market. Search video clips which you have to look at. More information on full movies on blog.

Each site which allows people to upload their movies is going to watch online solarmovie eu.

Knowing the dynamics of Twitter and how folks use it can indicate the difference between a failed promotion and one which actually fulfills your goals, watch movies on solarmovies.

Firstly, you should download a zip file containing the add-on from the Elementum website, and you have to find the specific zip file that matches your platform. gomoviessc