How to Build a Scene, Part 4: Push and Pull and Give and Take 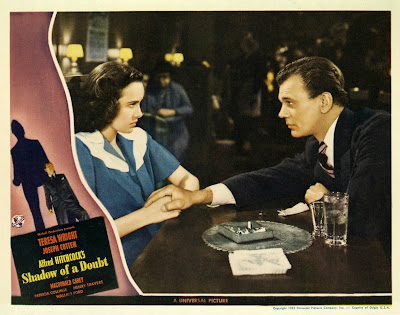 Some say that screenplays can’t have any scenes over two pages (two minutes onscreen). That’s a little extreme, but it’s true that you can’t have more than two pages of conversation without any written directions breaking up the dialogue. If the scene goes longer (or even if it doesn’t), you must seek opportunities to “re-block” it, as they say in the theater... Force the characters to their feet, give them a lot of stuff to do. Break off two people from the group for a brief private conversation, then re-intergrate them. Even at a table you can create mini-scenes for two characters where the others seem to fade away...

You need to know the same stuff that they teach directors and actors: characters need a goal in each scene and the other characters need to be the obstacles in their way, in every sense of the word. You already know that scenes need “push and pull” and “give and take”, so turn these metaphors literal.

I generally have a “one touch” rule: two characters should touch each other once and only once in each scene, whether it’s a punch or a shove or a slap or a persuasive-hand-on-the-shoulder or a caress or a clinch. This is payoff for both the literal and figurative chasing that’s been going on throughout the scene. Directors will have to figure out this stuff anyway, but the writer, too, can dictate how far apart the characters are at all times, and use that to convey a lot. When they touch, that’s the climax: one character has reached the other: can they seal the deal? Whether or not, it’s time to move on.
Let’s look at ten minutes of Hitchcock’s most underrated masterpiece, Shadow of a Doubt. Written by Thornton Wilder, it starts out with a heartfelt Americana setting similar to Wilder’s play “Our Town”, then quickly sours. A teen girl named Charlie is convinced that their lives will be so much livelier when her wandering namesake Uncle Charlie arrives, but she gradually realizes that he is the infamous “Merry Widow Killer,” now on the lam.

From minute 20 to minute 30 in is essentially one long scene. It begins in the middle of Uncle Charlie’s welcome dinner, as he gives them each presents and almost gives himself away by giving his niece a ring stolen from one of his victims. The scene continues as the father’s friend visits and pulls him outside to discuss their favorite crime stories, but we cut back inside as Uncle Charlie finds an incriminating article in the paper, and concocts an elaborate ruse as an excuse to tear it out and discard it.

Though this is ten minutes in the same location, it re-blocks continuously: Uncle Charlie crosses the table to give the parents their gifts, then the two Charlies pull off into the kitchen for their exchange. They regroup at the table, but Uncle Charlie decides to cut the scene short when a discussion of merry widows comes up, so he tips over his glass and gets them all up on their feet again, then the whole family splits up into smaller groups for the remainder.

The scene’s got tons of give and take, of course, because of all the gift-giving. Hitchcock understood the power of objects to reveal character. Uncle Charlie is using these gifts to dissect them and reveal their flaws (A mink again! The gift of doom!), only to have his niece turn the tables on him and use her gift to reveal his own secret (when she finds the inscription he missed.) Ultimately, his last object-taking in this scene will spell his doom, when his niece later investigates just what he removed from the paper.

Hitchcock knew that the easiest way to encapsulate the meaning of a scene was to end on an object changing hands, concretely passing on meaning, not just from one character to another, but also from this scene to those later scenes that will reference that object again.

But Charlie’s uncle doesn’t just give her the ring, of course: he first says “give me your hand” (which is not a fair trade.) His seduction of the family is as physical as it is psychological. The two kids, who are comic relief, take their gifts immediately without contact, but he has to touch each of the adults (once and only once) to get them to relent and take his tainted gifts. Later in the movie the touches will turn more violent, as push comes to shove, but Hitchcock also understood that any pat on the head could be a prelude to a knife in the back. As a writer, you’re charting that progression of physical contact as surely as you’re escalating the dialogue.
Posted by Matt Bird at 8:51 PM

The ideas of give and take and re-staging of mini scenes within scenes are useful in general but particularly when it comes to writing talky contained thrillers. I think of more recent examples like PRIMER and RESERVOIR DOGS and classics too like 12 ANGRY MEN.

Funny you should mention 12 Angry Men...

Your "one touch" rule is brilliant. Also well-timed. I'm currently revising a number of scenes that "work" but do not "pop." Adding a significant point of contact has been a great way to give the scenes some much needed energy. Thanks!