(Yes, folks, we’ve spilled over into a third week of this, but I’ll try to keep it lively as we barrel towards the grand finale...) 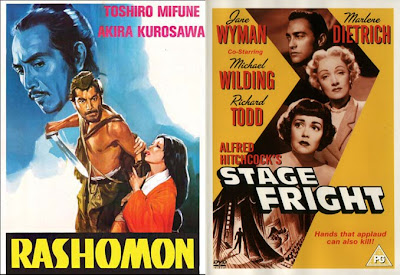 People tend to trust everything they see in movies, almost to a ludicrous degree. It seems strange today that people found Kurosawa’s Rashomon (by no means his strongest movie) so mind-blowing, simply because it showed contradictory versions of a story on screen, which was considered totally “against the rules”. Hitchcock had tried it a year earlier in Stage Fright, which just caused everyone to totally reject that movie, but for whatever reason, Rashomon broke through to American audiences. Even so, it was quickly declared the exception that proved the rule: every movie after that that tried it was called “Rashomon-like.” 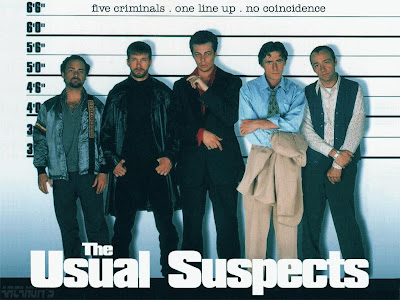 Eventually, visualized lies became more common, and most audiences have been trained to not feel betrayed, but there still seems to be a deep-seated need for audiences to believe everything they see. When my college showed The Usual Suspects, I heard a fellow English major walk out afterwards, trying to figure out the movie with her date. She started by saying, “Well, we know that everything we saw on screen really happened, so what would explain all that??”

I was baffled. Let’s ignore for a moment that the whole point of the movie is that everything we’ve seen except the first and last scene was a big lie. Instead, let’s just focus on the fact that movie first shows us Gabriel Byrne blowing up the ship, then later shows Kevin Spacey standing in the same spot and doing it in the same way. How could any sophisticated college student refuse to accept that they might have been shown a false (and shifting) flashback? 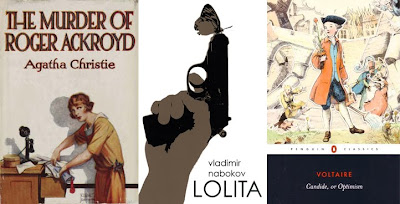 In books, on the other hand, unreliable narrators are very common. Sometimes we trust them to relate the events as they happened but don’t trust their moral perspective (We don’t accept that Huckleberry Finn is going to hell). Others tell such a self-serving narrative that we strongly suspect that they’re twisting everything (Humbert Humbert in “Lolita”). Others flat out lie to us (the killer of Agatha Christie’s “Roger Ackroyd”). Books can even have unreliable third-person “omniscient” narrators (The text of Voltaire’s “Candide” keeps telling us that everything that happens to its hero is the best possible outcome, but we don’t believe it).

Movies occasionally have unreliable voice-overs (Days of Heaven, Election), but the events we actually see are still portrayed objectively. Even the visualized lies of Stage Fright, Rashomon and The Usual Suspects are not true examples of unreliable narrators, since, in each case, the lies eventually end and we return to an objective reality at the end of the movie.

Some would say that it’s inherently impossible to have a truly unreliable narrator on film. After all, as I’ve said throughout this week, we aren’t looking through the hero’s eyes but rather over the hero’s shoulder. One of the things they try to teach you in film school, however, is that a well-directed movie is not objective, and every scene is still “from” a character’s point of view, even if we can see them on screen. They teach you to stop using co-equal two-shots and instead use more “over the shoulder” shots, so as to let the audience know which character to emotionally identify with in each scene. This creates a situation that novelists would call “limited third-person”, where the narration is told about, not by, the hero, but is still mostly limited to his or her perspective.

But if “Candide” can have a skewed third-person perspective, why not movies? Ten years ago there was a rash of movies showing us the hero’s delusions onscreen: Fight Club, American Psycho, A Beautiful Mind, etc, but in these movies, it was the images that were lying to the hero, rather than the hero lying to us through the images. When it was revealed that it was all a delusion, the heroes were as shocked as we were. 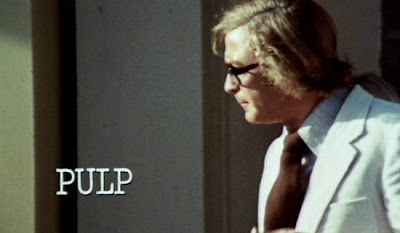 Has there ever been a movie where everything we see on screen is dubious, told to us by a narrator who has reason to lie to us? The closest thing I can come up with is Mike Hodges’s woefully underrated Pulp. Can you guys think of any others?

A possibly interesting aside:

The novelist John Irving once observed that first person novels are, of necessity, longer than third person novels, because the author has to keep making up scenes to account for how the narrator / protagonist would have known something.

I never entirely trusted Kitten as the narrator in Breakfast on Pluto, but that's the best example I can think of and it's not such a strong one because the viewer isn't forced to make a choice. It might be closer to an example of using a narrator to frame the main narrative as a story--in some cases you don't believe the narrator is telling the truth, but it doesn't matter.

I've never seen the movie, but in an interview, I heard Scorsese saying that he himself didn't know whether he believed that everything the audience saw in "Bringing Out The Dead" was to be taken literally. He specifically referenced a vehicle blowing up in the background at one point that was otherwise unacknowledged, saying that may have been only in Cage's head, and implied that other visuals in the movie were not to be trusted.

Last Year at Marienbad? All your examples are mainstream Hollywood films (except Rashomon), where I think we're unlikely to find a fully indeterminate film. But in arthouse, foreign, or experimental film they do exist. Kiarostami's Certified Copy is indeterminate, I think, but doesn't really have a narrator in the literary sense.

Even Rashomon, though - does the film ever tell you which of the three versions of the story(if any) are true? I don't think it does, leaving it indeterminate.

Interesting quote about "Bringing Out the Dead"! I haven't thought about that movie since two seconds after I left the theater, so I can't say as I remember if I noticed Scorsese playing around with these issues.

Kiarostami has always left me cold, but I can see where he's getting at some of these issues.

I just occurred to me that the movie Adaptation might be another good example-- you'd think I would have thought of that one, given the theme of this series.

And how had I never even heard of "Breakfast on Pluto" before now? I love Cillian Murphy, so I should check that out.

I don't know whether Breakfast on Pluto had a U.S. release. And not only is the main character transgender, but I think some Americans find the dialogue difficult to understand and the plot background probably makes more sense to those who have at least a passing knowledge of modern Irish history.

It's a movie I love to debate with myself about. For instance, on one hand, Cillian Murphy essentially plays a manic pixie dream girl, BUT on the other, he gets to be the main character, telling his own story.

Crazy ants earned their name from their hectic, frantic movements. They have an odd attraction for electrical equipment, and it is estimated that every year, crazy ants cause over $ 146 million in electrical damage. Crazy ants do not dig their own nests, unlike most other ants, and would rather settle into any sealed, viable container they could find.
شركة مكافحة حشرات بالطائف
شركة مكافحة النمل الابيض بالطائف
شركة كشف تسربات المياه بالطائف

Cleanliness is one of the important things and attention must be paid to the constant cleaning of the place and care in order to have a house free from dust and dirt, as having a completely clean place is one of the things that every housewife seeks for and our company is used
شركة تنظيف بعنيزة