Books vs. Movies, Part 4: Movies Must Be Explicable 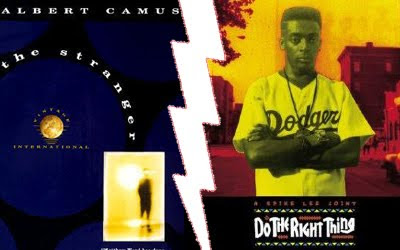 The actions of movie characters must be explicable. This is less true of characters in books. In Camus’s “The Stranger”, we never quite understand why Meursault kills that arab, but the reader doesn’t react by saying, “I didn’t buy it when he killed that guy.” Because we have been following Meursault’s nihilistic internal narrative, we accept that he would do it, even though he has no good reason.

Movies can’t get away with this. If the audience cannot understand why someone on screen would do something, they don’t chalk it up to the inscrutability of the character, they blame the moviemakers. A movie character whose actions are baffling is judged to be a poorly-conceived character. We don’t buy that they simply had no good reason, because the character hasn’t been able to convince us of that with an internal monologue.

Because we are locked out of their head, it becomes our job to divine their inner thoughts. In some ways, movies are even more about internality than books are, because every action and behavior in a movie is taken by the audience as a clue to that missing holy grail: the internal lives of the characters. If the moviemakers give us clues that point nowhere, then we simply assume that they failed. It would never occur to a moviegoer that a protagonist, like Meursault, might have no internal logic, and no good reason for doing what they do.

Occasionally, a daring moviemaker will attempt to break this rule and shock us by having a hero do something that totally contradicts everything we’ve seen them do up until that point. One obvious example is when Mookie throws the garbage can through the pizza place window in Lee’s Do the Right Thing. After all, Mookie had been the one person in the neighborhood who had consistently defended the establishment.

But this is the exception that proves the rule, because as soon as Mookie does this, the audience become focused like a laser on one thing: going back through everything we’ve seen to find an explanation for what Mookie did. And Lee doesn’t leave us dangling in the wind: he hangs a big sign on one piece of dialogue. We cannot help but conclude that Mookie had Da Mayor’s cryptic words in his head when he did it: “Always do the right thing.” If Lee hadn’t pointed us in that direction by making that the title of the movie, the audience might have said “I dunno, I just didn’t buy it when Mookie did that.” That would have been the movie’s death sentence.

I've read most of your posts, and this is the first time I've disagreed strongly enough to be compelled to comment.

Completely opaque characters are a part of many excellent films - those of Malick and Haneke in particular. It's only Hollywood's "identification" fetish that denies this possibility.

As you say, art requires distance. Some directors employ more distance than others.

(not that the characters in the films I'm referring to act wildly inconsistently, but very often there are no answers to questions of motivation)

Yes, but Malick and Haneke have followed the same trajectory as most challenging filmmakers: their first few films were somewhat more accessible, then they started regularly making movies that sharply divided even their fans.

Ultimately, I think this kind of proves my point: the average moviegoer watches a movie like "Tree of Life" and just gets angry at Malick instead of engaging with the movie... to the extent that movie theaters have to issue refunds and apologies. Both filmmakers have passionate fans, but those fans are proud of the fact that they're _not_ the average filmgoer.

I don't know. Consider "Badlands." Pretty much everybody loves that movie, but as an audience member you never know why anybody's doing anything. It's like a mystery, where the question isn't "who did it" but "who is this person?" Of course I have to admit that this archetype is unpopular in Hollywood, but I disagree that an average moviegoer won't accept it.

Also, I would argue that Haneke has followed the opposite path of what you describe. In his first film, The Seventh Continent, a family destroys all their possessions and commits suicide without explanation. His next few films have a similar feel. Most recently, though, he's won acclaim with The Piano Teacher, Cache, The White Ribbon, all of which are accessible and have proven popular with average moviegoers relative to their minimal mainstream exposure. The characters in these films cannot be explained, but the overarching mystery of motivation proves compelling enough to carry the film in each case.

Okay, I admit that I haven't seen enough Haneke to back up my claims, so I bow to you there, but as for Malick's Badlands (as with Days of Heaven), I think that the voiceover is the key element that allows the audience to connect to the film.

Even though both voiceovers are strangely (and hauntingly) languid and non-introspective, just imagine how alienated the audience would be without them. Though they don't satisfy all of the narrative conventions we expect them to satisfy, they are nevertheless appealing and compelling. They create empathy, if not total sympathy. They don't give us the whole picture, but they give us a fixed perspective, against which we can contrast our own feelings about the characters' actions.

Sheen's actions in Badlands are less explicable than Spacek's but I would argue that he's the object (observed) character, not the subject (observer) character, and object character's actions need not be as explicable. As long as the audience has the sense that we're _supposed_ to wonder about the objects character's motivations (as Spacek's voiceover invites us to do) then the audience is happy to play that game.

The primary danger of alienation comes when the audience wants to understand the subject character's motivation, but the filmmaker, intentionally or unintentionally, hasn't given us the tools.

A good example is a movie like "Big Fan". That movie wanted to make us wonder why Oswalt's character didn't sue the football player who beat him up, but I simply concluded that the answer was: "because the writer failed to achieve empathy with his own character." It's okay for a character to have a limited perspective or make bad decisions, as long as we feel intimately connected to that character and empathize (though not sympathize) with how those bad decisions got made. I would say that, in Badlands and Days of Heaven, we do feel that connection. In Big Fan, we don't.

On the other hand, I do agree that there are great European filmmakers who admirably make more ambitious attempts to test our need for identification than American filmmakers (Hollywood or independent). I thought Laurent Cantet's Time Out was entirely successful, though we spent most of the time wondering why the hero was doing what he was doing. Again, I thought Cantet gave us just enough clues that we were able to _enjoy_ guessing, and the character maintained our empathy, even though we didn't fully understand him.

I think the rule for most of these should be, you cab go ahead and break all these rules, but if you're not a genius, it might go badly for you.

Every one of your rules has been broken with success before, but it's much more difficult and the chances for failure are greater