Storyteller’s Rulebook #72: Beware the Dark Side (Of Bio-Pics) 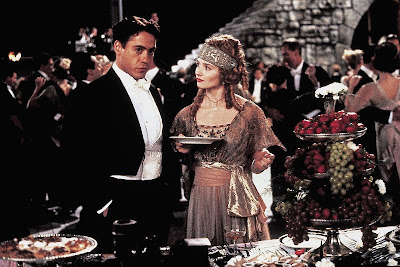 Okay, I’ve teased this for a while, talking about bio-pics here, here, and here, but now I’ll get to my real problem with most bio-pics...

When I started this blog, I assumed that the easiest part of the job would be writing the two-sentence plot summaries, but I quickly realized how wrong I was. My problem was that I felt bad if my summary of a comedy didn’t make it sound funny. Or if my summary of a tragedy didn’t feel a little sad. Or if a thriller-summary wasn’t thrilling to read. I realized that it was one thing to simply dissect a movie and then show people the guts, but another thing entirely to produce a miniaturization of a movie’s plot that somehow kept its essence intact.

And this is the same problem that confronts the bio-pic writer: how to capture the essence instead of the innards. Most of the time, biopics are about greatly admired figures. In such cases, the writers need to have their own version of the Hippocratic oath: First, do no harm. The lives of great people rarely match up to the rhetoric that made them famous. You have to ask: do I want to present the most dramatic possible version of this person’s life, even if it makes them look like crap, or do I actually want to capture their appeal?

This is especially difficult if you’re writing a bio-pic of an artist. Artists tend to be total jerks towards everyone in their private life. And maybe all you want to do is make them look bad, in which case you’ll have an easy time of it. But if you want to capture their appeal, you have a much harder job: you have to show why their particular artistic innovation was needed so badly in their cultural moment. You have to show how and why they broke through an artistic ceiling that held back their peers. Crucially, you have to show how awe-inspiring and empowering great art is to its fans—which means that you have to inspire that same awe in your own audience.

Chaplin made Charlie Chaplin seem totally unappealing—How many people left the theater dying to see one of his movies? How many people left Walk the Line in love with Johnny Cash? What ammunition did The Doors give to people who might want to defend Jim Morrison against his many detractors? You may say, well, that’s just honesty for you, you have to show these guys warts and all. But I would argue that it’s not really that honest. Chaplin, Morrison and Cash made art that still inspires and gladdens their fans every day, years after their deaths. If you can’t re-create that achievement onscreen, why make the movie? Show their flaws, certainly, but show them as the ironic context for their memorable achievements. Compare those to my two favorite bio-pics of recent years: American Splendor and Milk. These biopics don’t just assume that everybody already knows all the good stuff and so now it’s time to revel in the dirty laundry. Instead, they honored the legacies of two great minds, Harvey Pekar and Harvey Milk, with the goal of inspiring others to follow in their footsteps. In both cases, I left the theater thinking about how much more I could do with my own life. This is why people go to bio-pics!

Which all brings me to one of my all-time favorite bio-pics, which is tomorrow’s Underrated Cheesy Movie…

I'll have to both agree and disagree with you. I think biopics ought to show the essence of their subject--but not necessarily only the appealing stuff, especially not if what's dark and unseemly is part of what made the historical person noteworthy, successful and/or dramatically interesting.

THE DOORS may not be the greatest biopic ever made, but at the end of it I felt as if I understood a little of what was behind Jim Morrison's dark and visionary songs--and I did get into the music because of the film. I'd say similar things for Oliver Stone's NIXON and even his biopic comedy about George junior W. None of these historical characters is appealing in a conventional sense, but Stone's honest if imperfect attempt to understand what makes them tick and to convey that thematically has me sympathizing with all three by the end.

It seems to me that a biopic is worth making when its hero fully embodies a unique theme that has a particular resonance with their public achievements. Like Paul Schrader's MISHIMA, a film that never makes me want to be like its protagonist, but always has me marveling at his idealism and intensity--however ultimately misguided. And a film that, in the end, did sent me back to Mishima's work, had me reading all of it I could get my hands on.

The problem you're getting in this post has always bugged me even more vis-a-vis sports movies, which almost always take for granted the audience's interest in and enthusiasm for the sport in question. I can probably count on one hand the number of sports movies I've seen that even try to convey some of the joy of partaking in their respective athletic events.

Excellent points. I do agree to a certain extent, and I'm glad to hear that you were drawn to the music by The Doors. But I don't mean to say that they should only show the appealing stuff --both American Splendor and Milk showed many negative aspects of their Harveys (Pekar's misanthropy and failed marriages, Milk's 40 years in the closet)-- just that they put these failings in the context of their achievements, which is all I ask.

(And I should really watch Mishima!)