How To Write A Screenplay in 30 Easy Steps, Part One: Ideas 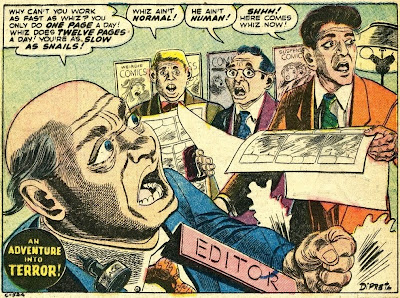 So I’m on vacation, but I’m so damn responsible that I left behind a new series that will unspool all week. Enjoy:

Brainstorm hundreds of ideas. Make lists of every embarrassing date you’ve ever been on that was unlike the bad dates we see in the movies, list every superpower you’ve never seen done before, list all of the professions that they’ve never shown us the asshole version of… (Bad Santa! Bad Teacher!), list every life or death profession that they’ve never made a movie about (offshore oil driller? International Criminal Court prosecutor?), list every larger-than-life personality you met at school or your first job that was unlike any character you’ve seen in fiction. Brainstorm for days.

Now start developing three of these ideas. (If you don’t pick three, you’ll try to cram all of your favorite concepts into one script. If you force yourself to write three stories at the same time, you will see that none of them can be all things to all people. You’ll realize that each story has its own needs, and its own audience. And you’ll stop yourself from trying to plug one type of love interest into every story. They can’t all be manic pixie dream girls!) The key here is to start with a character or a situation or a setting and transform it into a problem. A story is always and only about a problem!

3. Dream Up a Story for Each Idea

For each story, write a one-paragraph story with a beginning, middle and end. And some irony. All stories are driven by irony (an unlikely hero, or a tragic coincidence, or a humorous juxtaposition…). It’s never too soon to start finding that irony. As you write these paragraphs, you’ll have to…

4. Create a Cast of Characters for Each

Maybe you start by asking: Who would the antagonist be? Then ask: What hero would be the one person that could (ironically) challenge that antagonist? Maybe you start with the problem and then ask: Who would be the most ironic person to tackle that problem? Then find the rest of the characters by asking: Who would naturally help and who would hinder the hero in dealing with this problem? Describe each character with one line for now.

5. Expand Each Story into a One-Pager by Creating the Structure

For all three ideas, figure out the seven beats of the story. Once again, the seven beats underlying almost every story are these: 1—Hero knows what he/she wants but not what he/she needs, 2—Embarrassing incident that brings a dangerous opportunity, 3— Hero commits and makes progress by doing it the easy way, 4—The easy way leads to a big disaster and loss of safety, 5—The hero tries the hard way, dealing with real consequences, 6—The hero faces a spiritual crisis as a result of those consequences, and 7—The strengthened hero deals with the problem once and for all.

6. Get Some Outside Input

Find three friends who you trust. Maybe one of them will know something about the screenplay market right now, which is always a nice perspective to get. Don’t show them what you’ve written. Just pitch all three stories to them out loud. Ask them: Are any of these any good? If so, which one of these should I write right now? Take that input into account and…

7. ...Choose One of the Three and Commit to Writing it.

Okay, that was the fun part. Tomorrow the hard work begins!

Labels: How to, Write a Screenplay