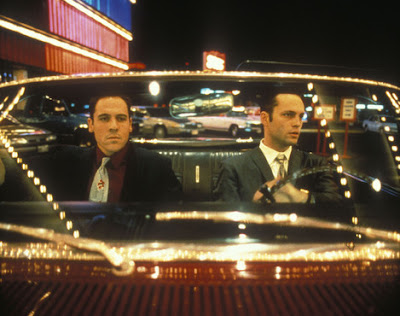 I have no pet names for my wife. On those rare occasions that I feel it would be appropriate to tack an endearment onto the end of a sentence, I fall back on the old standbys, “sweetheart” or “darling” or “baby”. But I’m not a character. And the one thing that you have to understand about characters is that they have more personality than you or me.

When a movie character uses an endearment, that’s one more chance for you to give them a little more personality. Something specific, not generic. Something that no one else in the screenplay would say. Sometimes you can find language that amplifies the key notes of their personality: Vince Vaughn in Swingers doesn’t say “You’re awesome, dude!”, like he probably would in real life, he says “You’re so money and you don’t even know it!” That’s wonderfully specific and it speaks to his predatory tendency to value people according to what they can do for him. When Dan Duryea in Scarlet Street calls his girlfriend “Lazy Legs” and she loves it, then we pretty much know everything about them both.

On the other hand, language quirks can also be a great way to cut against the grain of the other characteristics you’ve established, rounding a character out. When I writing the hedge fund guy script that I’ve mentioned before, my first instinct was to have him call his wife something crude like “sweetcheeks”, but then I decided that I’d already rung that bell too often. “Sweetheart”, on the other hand, was too generic, so I had him lovingly call his wife “sweet potato.” After all, this guy was a Wall Street shark now, but he’d worked his way up from a small town, so he should still have some of that cultural baggage.

For playwrights or screenwriters, one of the many reasons to give each character unique language is that you force the actor to say something they’ve never said before, which takes them our of their habits. When they see the line “I’ll be home soon, Sweetheart”, they automatically think, “Sure, I know how to say that.” When they see, “I’ll be home soon, Hammerhead,” then they have to stop and think about who this person is and what this relationship is. The more character you give them to work with, the better of a performance they’ll give.

Obviously, you can easily take this too far. Whatever you do, do not tack a nickname onto the end of every sentence just to give your dialogue a feeling of rootin’-tootin’ fun. But for those moments when you yourself would naturally feel the need to tack one on, don’t be afraid to let your character show a little personality.
Posted by Matt Bird at 9:23 PM

I think I remember you saying that this blog was a resolution from last New Year's. I hope that doesn't mean you're done at the end of the month. Your insight is terrific.