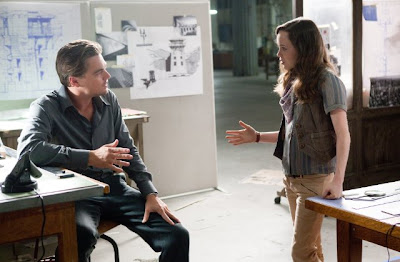 Writers have an irrational hatred of “exposition” (long scenes where someone sits down and explains the plot). Supposedly, this is because the public hates it, but the fact is that we hate it even more than they do. This is why the general public liked Inception a lot more than most screenwriters did. Listening to anyone explain the rules of the plot for that long sounds like fingernails on a chalkboard to us. Not only is exposition clunky, dull, and uninvolving, it’s just so… so… uncool. Cool writers are those who come up with elegant ways to elide exposition and still get the story across. Letting characters explain everything is admitting defeat.

So why not just do away with exposition entirely? Certainly, when I was a kid, we would just fastforward through all talking scenes in Raiders on the Lost Ark on VHS. Problem solved, right? But no, that doesn’t work either. The modern equivalent of my nine-year-old mindset can be found in the recent Harry Potter movies, where they now just leave all the boring “story” parts out. If you wanted to know what was going on in the latest HP movie, I sure hope you read the book. Actually, I hope you read the book three times, because I read it twice and yet I still couldn’t keep track of who everybody was onscreen or what was significant about each plot turn. It was like watching a three-hour book-trailer: “Here’s a bunch of creepy-looking suspense scenes! Don’t they make you wish you knew what was going on?”

The worst offenders of the dreaded “exposition dump” are supposedly the James Bond movies. In the Austin Powers spoofs, for example, Bond’s boss “M” was replaced by a character named “Basil Exposition”. But some Bond movies do a better job than others with all the dreaded exposition, and they can show us how to tackle this problem. In some Bond movies, the first we see of Bond is when he saunters into M’s office for a new assignment and gets smothered in facts while he listens blandly. But in other movies, we first meet Bond on a mission (presumably with little information himself), and it’s only when things get bollocksed up that he storms into M’s office demanding to know the whole dirty story. This hints at two rules:
As I was saying last week, every scene should reverse an expectation, and exposition scenes are not exempt. If you need a scene in which the hero hears a five minutes speech revealing the nuts and bolts of his grandfather’s corrupt business empire, then take some time first to roll that rock uphill before you release it: let the hero brag in a previous scene about how proud he is to know that our country was built by great philanthropists like his grandfather. Now, when he hears the ugly truth, we’ll identify with the turmoil it causes within him as each painful word lands. If the character cares, then we’ll care.
Posted by Matt Bird at 9:40 PM

Ha -- timely. Having been sensitized by your characterization of the Pensieve as The Bowl of Exposition, I found myself smiling the other night at how Spielberg gets us through the huge information dump at the beginning of Raiders by having Harrison Ford work himself into a professorial frenzy of spinning blackboards and flailing chalk. (It's a huge wink and nudge, too,of course, but since the whole movie is it sort of doesn't count.)

Like rams I'm a fan of the bold straightforward exposition dumps by great directors. Two others that come to mind are the lecture/tour at the beginning of THE SHINING and the film and briefing in Tarkovsky's SOLARIS. Btw, Matt, you may have already read the posts on David Bordwell's blog about INCEPTION, but if you haven't they're worth a look. He argues fairly convincingly that exposition doesn't get in the way of story for INCEPTION because it _is_ the story in INCEPTION. Frankly, I feel that way about a lot of thrillers that are dear to me--ALL THE PRESIDENT'S MEN, PRIMER, TINKER TAILOR SOLDIER SPY--so it's nice that someone like Bordwell takes the time to dig into how this works. He's also got another blog entry from this year, I think, an excellent contrarian rant on that old screenwriting saw of Showing vs. Telling, where he comes out in support(conditionally) of the latter.