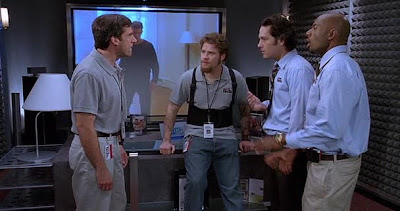 If a hero has three close friends, they need to have different personalities and they should represent different things to the hero—different paths he could take. Don’t give him a bunch of interchangeable best friends who all want the same things out of life and out of him. If they’re realistic, they’re going to give the hero conflicting advice, and each will seem dubious in their own way. The 40 Year Old Virgin did this especially well. At first glance, the four guys egging Steve Carrell on all seem to be giving him the same advice—get yourself laid. But as the movie goes on, we realize that each is pulling him in different directions based on their own baggage.

This rule also applies when you’re creating contrast between a best friend and a love interest-- the hero should never get the same advice from both. They should each want him to be a different person. You, as the writer, have already decided what’s wrong with your hero, so your tendency will be to have everybody in his life give him that same advice over and over, but in real life, anytime anybody gives you advice it’s colored by their own wants and needs— a love interest and a best friend want different things from you and for you.

But wait, you might ask, won’t their self-interested advice make them unsympathetic? Not really-- giving a character a limited perspective will just as often make a character more likable. Believable weaknesses, ones that we recognize from our own life, are forgiveable. After all, it’s an example of a character going after what they want, which is what the audience always wants to see.

And ultimately, the audience loves that moment when they realize that, by seeing many different sides of the same situation, they now have more perspective than any individual character has. This is a big part of what fiction can do for us: give us the feeling of wisdom that comes from the ability to understand multiple points of view, not just the limited perspective we’re stuck with in real life.

Good advice isn’t always all that it’s cracked up to be, but next time we’ll talk about the most valuable advice of all, bad advice...
Posted by Matt Bird at 12:02 AM