Storyteller's Rulebook #48: The First Rule of Write Club is You Do Not Talk About Write Club 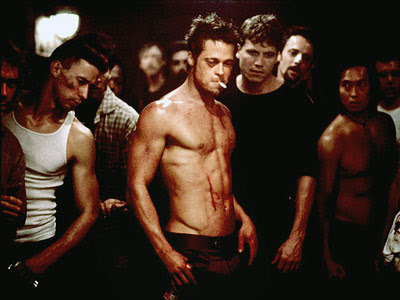 I had an email exchange with a screenwriter I like a lot, Jonathan Auxier, and he had this to say about the Hero Project: “I've heard people argue that analyzing story hinders the creative process; I would argue that it gives a writer the ability to copy things he's seen without just copying things he's seen.”

I certainly agree. I hear people say that one shouldn’t know one’s own process because then one pollutes the purity of one’s own fountain, or something like that. As you’ve probably guessed by now, I don’t feel that way. Understanding the process makes you a better writer, and it should also make you highly suspect of all that “pure” work you were doing before. As Jonathan implies, that wasn’t pure writing, it was pure copying.

All writing has structure, so if you’re not being intentional with your structure, that means that you’re unconsciously regurgitating structures you’ve seen before. And that’s fine. Everybody starts out that way. It’s called pastiche and it’s a legitimate form of storytelling. And it’s painful to abandon that, because it was so cool and mysterious. And often, when you start outlining and getting all intentional about everything, the quality of your writing does indeed go down at first. Like a bowler or an archer, you get worse the more you think about it… until you finally figure it all out, and then you get much better.

When you start outlining, it can feel gross and phony and mechanical. It was so much more fun when you used to say “I don’t know where it comes from! It flows into my pen straight from the music of the spheres.” But that can’t last, for several reasons. First, as I mentioned before, you can’t repeat those results reliably enough to make a living. But really, you can’t even sell the first one that way, because, if you don’t want to know your own process, then it’s really hard to make revisions. You can’t knock out a few walls because you don’t have the blueprints and you can’t tell which walls are load-bearing. But making a sale involves an endless number of revisions. You’re not selling them your story, you’re selling them the right to make your story into their story. They who buy the canvas call the shots.

Some people don’t outline, but those people have to do even more re-writing than everybody else. Save yourself the trouble. I go through several outlines before I write each script. The first is just a list of every cool thing that could possibly happen. Then I figure out who the characters are and make some decisions and compose a reasonable list of scenes with a beginning middle and end. I cut and paste and rearrange those scenes until if feels like a movie. But I still won’t let myself write yet. At this point, my outline is a list of events. X and then Y, and then Z. That’s the “and then” outline. But before I write I have to create the “and so” outline: X and so Y and so Z. Each scene causes the next scene, or at least demands the next scene. Even if I’m cutting between different locations, then each scenes should still be a direct counterpoint to the scene that came before, answering some question that was posited by the cut. Then I’m ready to write. (You can see this process in action in my previous post, by the way, if you look at the two three-point mini-beatsheets I showed.)
Posted by Matt Bird at 11:34 PM